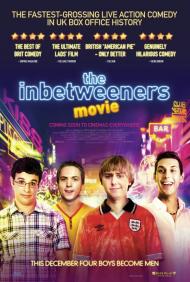 The Inbetweeners was a popular English sitcom that focused on four teenage schoolboys living in suburban London. The name coming from the idea that they were in that awkward stage of life in between childhood and adulthood. This theatrical film, which acts as a finale to the series, tells of their summer holiday following graduation.

Although the series isn't well known in the US, the plot is simple enough and the characters such archetypes that you'll be up to speed before the quartet has left for the airport. All you need to know is that Will, Jay, Neil and Simon are four middle-class teens who decide to take a vacation to Greece together during the summer after they leave school. Will is the nerdy one who narrates the series and the movie. Jay is the one who never stops talking and lying about sex, saying things like, "This girl's so wet for me I can hear the waves breaking in her fanny" despite being the least sexually experienced of the group. Neil is the dumb, but incredibly carefree one. Simon comes across as the most normal, but he's as neurotic as the rest of them. None of them were popular at school and the series found them constantly getting into one form of trouble or another. When they aren't being put upon or picked on by others, they are  fighting amongst themselves.

There's not much plot, but plenty of laughs. Most of it is of the juvenile variety and yes Patrick, some of it involves puking and feces plays a small part, which I know is your favorite form of humor, but at least here it actually produces laughs. The four boys meet four girls. Simon's girlfriend, who just broke up with him, turns out to be vacationing at the same spot, which causes some trouble. Mainly though, it's just about the boys getting into and out of comic situations. I don't mean that as a complaint. More plot simply isn't needed.

While plenty of the jokes rely on shock--nearly all of the guys ends up naked in an embarrassing situation at one time or another-- and physical humor, there are some funny lines. After the boys prepare to go out one night, Will narrates, "So smelling like an industrial accident in a Lynx factory and looking like the world's shittiest boyband, we hit the town." As in the series, quite a bit of the humor comes from the interplay between the different personalities in the group with Will on one end of the spectrum and Jay on the other. These guys started off being friends basically because no one else wanted them.

As this was meant to be the finale to the series the characters are allowed to have a happy ending which is something that almost never happened on the show. Of course it's not meant to be realistic, but Will's happy ending seems the most unbelievable, but perhaps that was just the writer's reward for enduring so much shit during the show.

Ironically, while this movie was meant to end the series, it became one of the biggest surprise box office hits of the year in the UK and will most likely spawn another sequel. If one is made, I will happily see it. I can't help feeling though, that they might be better off letting it end here as planned. Although I loved the show and this movie, these characters could be difficult to sustain as they get older. 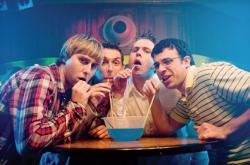 Jay, Neil, Simon and Will in The Inbetweeners Movie.

This is one silly little movie with plenty of laughs.  Simon, Will, Jay and Neil are all likable guys you will find yourself rooting for. These four nerdy friends are familiar types and the humor is witty and broad enough to traverse the Atlantic quite easily.

The jokes come fast and furious. If you aren’t used to British accents you may have to listen carefully to get them all. I cracked up at the speech given by the teacher at their graduation ceremony. Here’s part of it… “At best I am ambivalent towards most of you, but some of you I actively dislike, for no other reason than your poor personal hygiene or your irritating personalities. I hope I have made myself clear on this point and in case any of you think I am joking, I am not. I assure you, once my legal obligation to look after your best interests is removed, I can be one truly nasty fucker.”

The plot is slight and we’ve seen it all before. Four blokes go on vacation and try to get laid. The personalities of the characters and their interaction are what make this type of movie succeed or fail. It certainly helped that these characters were already well established on the television sitcom. They play off of each other well and exhibit the easy camaraderie of real life friends.

Here are two of my favorite bits of dialogue between them…

Will: (upon arriving in Greece) “First stop the Minoan palace in Knossos.” Jay: “We haven't come half way round the world to look at some fucking Greek ruins.” Neil: “Yeah you can see that shit anywhere.”

Jay: “Don't you know about foreign police? They take you up a hill, beat you up and then they bum you!” Neil: “Yeah. And if they don't kill you, you kill yourself because of the shame of you getting a boner whilst you was being bummed!”

As Scott mentioned none of these actors are shy or modest about disrobing in front of the camera and I even laughed when Will puked on the boat. If you are going to have a puking scene in a movie, this is how to make it funny.

Although this is a silly comedy there are glimmers of heart. In one scene an exuberantly innocent Jay approaches some popular guys at a club and tries to hang out. The main prick of the group makes fun of him and his t-shirt (it’s pink and reads “Pussay Patrol) and threatens him with physical violence. You can watch Jay visually deflate before your eyes. As he and Neil walk away Jay puts on another shirt and buttons it up to cover his t-shirt. It’s touching to witness his innocent exuberance momentarily slip away.

The Inbetweeners Movie is lightweight fun featuring four friends on the fantasy summer vacation we all wish we had experienced at their age. 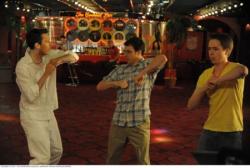 Neal trying to show Will and Simon how to dance.

Having watched a marathon of The Inbetweeners television show and movie, I came to love these guys. As Scott wrote, they, "...started off being friends basically because no one else wanted them."  They are all losers of sorts, yet have unique personalities.

Will is a snob who believes he is better than the rest.  He used to go to an elite school and looks down at everyone at his new school.  He cannot grasp why everyone else does not see him as the superior person he believes himself to be.

Jay is obnoxious, endlessly bragging about sexual exploits he has never actually had.  After meeting his father, who constantly berates and insults him, we understand that Jay's bragging is simply his insecurity screaming for respect.  In Neal, he finds a gullible mate who buys all of his stories,

Neal is blithely ignorant.  He goes through life as happy as can be.  He is unaffected by everything.  Whether being pursued by a pedophile or having sex, he acts nonplussed.  Nothing gets him down or too excited.  On the show when he casually states he has had sex, he says simply that, "It was alright."

Whereas Neal shows very little feelings, Simon wears his emotions on his sleeve.  His infatuation with Carli is so outward that he annoys the others.  He cries when she breaks up with him.   Jay hits him in the groin every time he mentions her name.  Simon has a perpetually confused look on his face.  I enjoy his relationship with his father.   Simon yells at him in mock insult while his dad just smiles knowingly.

Patrick wrote that we’ve seen the story of young men looking for sex before, and he is right, (Porkys, American Pie...etc).  However, this does not follow the usual plot.  The climax of the movie is the four guys maturing, without actually getting laid.  Will meets a girl who enjoys his sense of humor.  Jay learns to let go of what other people think of him.  Simon finally understands his relationship with Carli.  Neal shows a brief hint of melancholy.

I prefer the series to the movie, as the movie stretches the reality of the characters a bit thin.   I still found much to laugh at though.  Patrick mentioned Mr. Gilbert's speech.  He was always good in the show as well.  Neal, a good dancer,  dancing his way across the floor with the rhythmless Will and Simon trying to follow suit, is hilarious.  My favorite single moment though, is when Lucy offers Simon an opportunity on the beach.

I agree with Scott, it would be best to let these guys go.  They grew a bit in this film and as they continue to grow, they may likewise lose their charm.  It is fun seeing them mature, but how much longer can they actually be considered inbetweeners?