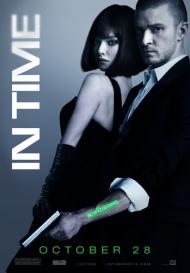 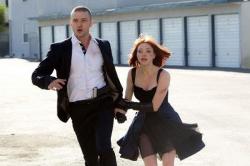 Justin Timberlake and Amanda Seyfried in In Time.

Science Fiction movies tend to go one of two ways. Either they present thought provoking ideas, usually some futuristic allegorical story that really is a reflection on our own times, or as an all out special effects laden action film.  The Star Trek versus Star Wars factor. The premise for In Time seems ripe for the intellectual treatment, but the script isn't nearly smart enough for that. While the special effects are pretty limited, it does try to provide some action, but even that is fairly tame and interrupted too often by slow paced scenes with too much talking.

The movie is set at some indeterminate time in the future. Like too many Science Fiction movies, this one has one central gimmick of future technology while the rest of the world seems to have remained the same (They even still have pay phones!). The only change in this future seems to be that time is the new currency. Everyone ages until their 25th birthday and then their clock kicks in, giving them one year to live unless they earn more time. The rich can live forever while the poor live day-to-day.  Now surely in today's Occupy Wall Street world you could find some way of making an allegorical statement with that plot device. The script and certainly not Timberlake's performance ever provide that kind of depth though.

Timberlake plays Will, a kid from the ghetto who earns enough time each day to live until tomorrow. One day he meets a rich guy in a bar who's tired of life. When Will rescues him from some gang members, the man gives Will all the time he has on him - which is over a century - before allowing himself to die. Will take his new found fortune and heads for the nice part of town and starts to live it up. The police, known as Timekeepers, lead by Raymond (Murphy), want to arrest him however as they think that he murdered the man for his years. Soon Will is on the run with Sylvia (Seyfried) the daughter of a Time Magnate and they're doing their best Bonnie & Clyde routine, robbing time from the banks and giving it to the poor.

There's certainly room for some action and intrigue in that plot, but very little of it shows up in the film. The script is predictable and rather flat. The dialogue is dull and full of platitudes and there's far too much of it. Less scenes of Will and Sylvia sitting around talking and a little more action might have made the nearly 2 hour running time feel a little shorter.

I also never really believed in the Will character. He only has so much time left to him, but he still finds time to stay in perfect physical shape. He's a kid from the ghetto but he blends seamlessly into high society, knowing what clothes to wear and how to interact. It's just not believable and Timberlake certainly doesn't have the acting ability to really make it work. There are a few dramatic scenes where he is in way too far over his head.

The makers of this film should have decided which way they wanted to go. Smart and deep or light and action packed. Instead it seems as though they tried to do it all and only did a half-assed job at both.

Reportedly noted Sci-Fi author Harlan Ellison is suing the makers of this film for plagiarism, saying it resembles a short story of his from the 1950s. If I were him, I'd being keeping quiet about that. I wouldn't want my name associated with this mess even remotely. 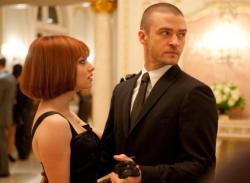 Amanda Seyfried and Justin Timberlake in In Time

Writer/director Andrew Niccol has an affinity for stories of class warfare.  His first produced script, Gattiga, was likewise a science fiction story of the haves versus the have nots.  He clearly has issue of the powerful controlling the common man.  That theme is also clear in his second script, The Truman Show.

Although I agree with Scott that the finished story on screen is not the most intellectual, In Time is very much an attempt to be a, "...futuristic allegorical story that really is a reflection on our own times..."  The entire plot is Liberal minded pap.  The rich are all evil, greedy people who do not care at all about the poor.  Even when the two leads start stealing they justify it with the line, "How can it be stealing when it has already been stolen?"  How and why should I root for these two criminals?  In one scene they stop and rob a random wealthy woman, leaving her with one day to live.  No doubt the protesting sheep Occupying Wall Street would cheer such actions.

The beginning of the film show's bars full of people drinking and gambling.   Is it the rich people's fault how the poor spend their time/money?  Will's best friend is an alcoholic.  They have a child they cannot afford.  Does this world not have birth control?

Where the film drops several IQ points, and the allegory comes apart, is when it tries to show that the rich are merely cruel.  The story states that the banks constantly raise the interest rates to keep the poor, poor, so they will die off quicker.  The prices of everything go up not for any business reason but just to screw over the poor.   Businesses are not personal.  They want the customers, and in a free market have to keep prices down to compete.  Sure, prices go up, but inflation has nothing to do with intentionally screwing over the working class.  Allegorys only work if they apply to both the story and real life.

Scott, I am not sure how close you paid attention to the movie.  You wrote that you did not believe the Will character because, "...he blends seamlessly into high society, knowing what clothes to wear and how to interact." That was not at all the case.  Nearly everyone in the rich part of town knows he is not from there as he races through everything he does, as he is use to not having expendable time.  When at the party he has no idea what caviar is.  He always asks how much everything costs and any nice clothing store would have a salesman to help pick out his suit.

In Time has just enough going on to be a mildly entertaining film.  It tries hard to make a social statement of the rich oppressing the poor, but it is executed on an elementary level.  Anyone who takes away some deeper meaning needs to do some reading.