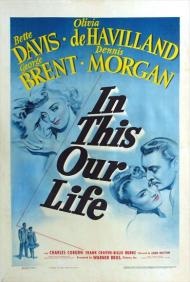 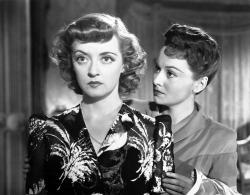 Bette Davis and Olivia de Havilland in In This Our Life.

Bette Davis continued her streak of "bad girls you love to hate" as the completely selfish Stanley Timberlake in John Huston's In This Our Life. She dumps her fiancee (George Brent in another thankless role) to run off with her goody-goody sister Roy's (Olivia de Havilland) husband (Dennis Morgan). She soon drives him to drink and ultimately suicide. Then Stanley returns callously home where she discovers that her jilted ex is now in love with little sis. She jealously tries to entice him into meeting her at a bar to rekindle their old flame. He doesn't show up and in a drunken rage Stanley causes a hit and run accident that kills a small child and seriously injures the girl's mother. Instead of admitting her guilt Stanley tries to pin the murder on an innocent black law clerk. Ultimately the truth is discovered but Stanley remains defiant right up to the end. In other words it's a typical role for Bette Davis.

Besides the stars already mentioned, In This Our Life also features Charles Coburn, Billie Burke and Hattie McDaniel, but everyone takes a back seat to Bette as she plows her way from the opening credits to the final scene.

Yes Stanley Timberlake is rotten to the core and as most actors will readily admit it is much more fun to play the villain than the hero. Poor Olivia de Havilland. She almost never got to be evil. It wouldn't be until she re-teamed with Bette Davis twenty-two years later in Hush Hush Sweet Charlotte that she would finally get to play the bad one and only then because Joan Crawford was unavailable.

George Brent was Bette Davis' most common leading man. They appeared in eleven movies together. In This Our Life also has numerous cameos by famous faces. Humphrey Bogart, Mary Astor, Sydney Greenstreet, Walter Huston, Peter Lorre and several other well known stars can be spotted by eagle-eyed viewers.  Still given the juiciness of the lead role and the fiery disposition of Bette Davis and it's a safe bet to say that an army of cameos wouldn't have upstaged her in this one-woman tour de force.