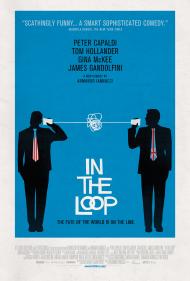 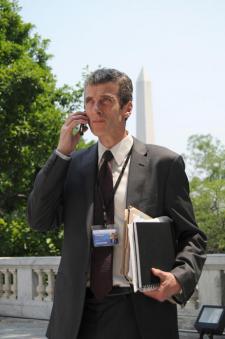 Peter Capaldi is terrific as Malcom Tucker in In the Loop.

In the Loop is a whip-smart and very funny political comedy about the build up to the Iraq invasion. Normally just knowing that a movie is about politics or Iraq is enough to keep me away from it, but perhaps because this one is out of England instead of Hollywood it's more concerned with entertainment than preaching.

The movie is from the makers of and very much in the style of the BBC series In the Thick of It. Both this movie and that series satirize Anglo-American politics. The secret to its success, I feel, is that it doesn't feature presidents and prime ministers, but instead focuses on the cogs of politics; the little people who do the actual work. In this way it doesn't feel so much like an attack on either the Right or the Left. Party names aren't thrown around or attacked. It's more a satire of Bureaucracy and how political deals actually get done. Although it does poke fun of the reasons for going to war.

With fast paced, crackling dialogue and a large cast this is a movie that requires and rewards close attention. Hapless British MP Simon Foster inadvertently draws attention to himself during an interview when he states that “War is unforseeable.” He's subsequently invited to America where both sides of the war debate want him on their side because they've interpreted his comment to mean he agrees with them and both sides are keen to show that their views are international. Simon is in way over his head and is manipulated by American Generals and politicians along with British Spin Doctors and even his aides seem more well informed than he does. At the same time Simon is forced to deal with the mundane matters of his constituency. The story is told at a rapid-fire pace and with great humor.

Although the entire cast is quite good, it's Peter Capaldi as Malcom Tucker who steals the movie as the Prime Minister's political enforcer. His every line is dripping with profanity and venom. “Within your 'purview'? Where do you think you are, some fucking regency costume drama? This is a government department, not some fucking Jane fucking Austen novel! Allow me to pop a jaunty little bonnet on your purview and ram it up your shitter with a lubricated horse cock!” is an example of how he talks. Tom Hollander is also quite good as the clueless Simon who is manipulated by nearly everyone.

It's very difficult to single out anyone though because really there are too many people to single out. Simon's assistant Toby has some great lines as does the Scottish Public Relations man. Really though, everyone gets good lines because of how funny the script is.

In the Loop was nominated for a best adapted screenplay Oscar. I doubt very highly it will win, but it deserves to. The other movies nominated against it are good, but none of them are so focused on the dialogue or contain so many memorable lines. 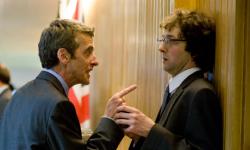 I own you. You're my Kunta Kinte!

In the Loop is hilariously British from start to finish.  Fast paced, crackling dialogue with great humor indeed.  Every scene has memorable lines. "Judy's lubricated horse cock aside..."  "The voices in his head are now singing barbershop together."  "At the end of the war you need some soldiers left really, or it looks like you've lost."  "Meeting my constituents. It's like being Simon Cowell, only without the ability to say, "Fuck off, you're mental."" One of my favorite lines is when a General says of war, "Once you've been there, once you've seen it, you never want to go again unless you absolutely fucking have to. It's like France."

I agree with Scott, Peter Capaldi as Malcolm Tucker steals the movie.  He says "Fuck" more times than any character in any movie I can think of,  "You get sarcastic with me again and I will stuff so much cotton wool down your fucking throat it'll come out your arse like the tail on a Playboy bunny."  When an American tourist calls him on his language, he yells, "Kiss my sweating balls you fat fuck!"

Besides the dialogue, there are plenty of visual jokes. Foster and Toby watch shark shows in their under wear just after Foster told Toby he masturbates to them.  The general uses a child's toy to show numbers of soldiers to a woman who earlier in the movie had an inconvenient bloody mouth.  There is also a man's garden wall and the support boards.

In the Loop did not win the Academy Award for best adapted screenplay but it deserved it.  Although it is set within the international political world, it is not at all political.  Everyone, on both sides of the ocean, come off as ridiculous. Other than showing the British stand up to Americans, In the Loop is not making a political statement at all.   It merely enjoys poking fun at all the many political lackeys who scurry around like mice in a maze, accomplishing very little.

As a last note, my wife and I loved Anna Chlumsky in My Girl many years ago. She took a break from movies to go to college, but she is back.   She is as adorable as she has ever been but she is definitely acting all grown up with such lines like, "How far would you go with Linton, you freaky little stalker? Downtown? Or all the way up Brokeback Mountain?" 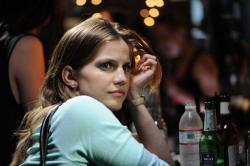 The grown-up Anna Chlumsky in In the Loop.

Yes, In the Loop is hilariously British from start to finish. The script is filled with memorable zingers, quips and insult jokes. It is a smart satire of modern politics that makes fun of absolutely everyone. My only problem with it is its relentless humor gets to be a bit of the same after a while. Nearly every character has an infinite amount of readily available and incredibly clever comebacks and putdowns at their disposal. It all gets to be a bit much after a while. I kept waiting for the story to slow down and breathe.

I agree that Peter Capaldi gets the funniest lines as Malcolm Tucker. “"Climbing the mountain of conflict"? You sounded like a Nazi Julie Andrews!” But the laughs are plentiful enough to spread around for all to share. Look at the mileage they get out of the title of Liza’s PWIP PIP paper. One character asks, “Who wrote that? Charles Dickens?” While another wonders, “What is that, a report on bird-song?”

One of my favorite jokes comes courtesy of Linton Barwick. “Well, I don't want to be accused of micro-managing, but I cannot understand why I Heart Huckabees is on a list of DVDs considered suitable for armed-forces entertainment. That self-indulgent crap is not suitable for combat troops.” Yes the script is wonderful.

Eric mentioned the visual humor. My favorite site gag is when Karen Clarke starts bleeding at the mouth during a meeting.  She takes her assistant into the ladies room with her. She sticks toilet paper in her mouth to stop the bleeding and then with her mouth full of paper and with blood all over her chin she emphatically tells her assistant, “I’m not a monster!” The subplot dealing with the wall is also good for a few chuckles.

In the Loop is funny as hell but a bit cynical and sterile (or maybe just too British). At any rate it made me laugh but I kept waiting (in vain) for In the Loop to expose its heart. And I didn’t even recognize Anna Chlumsky now that she’s all grown up.