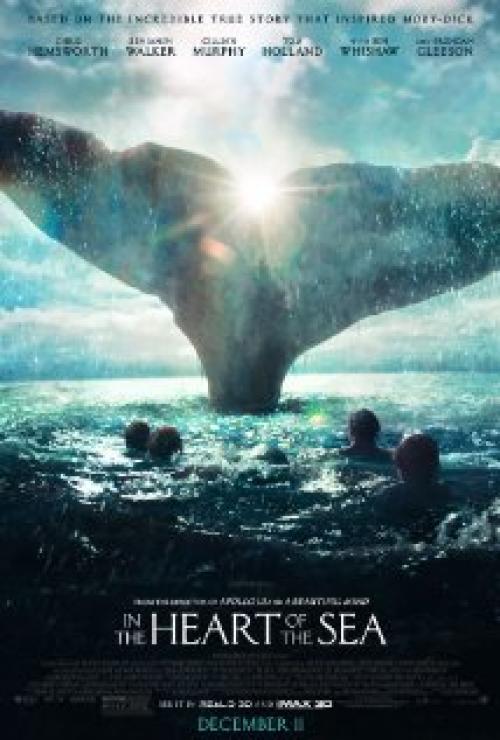 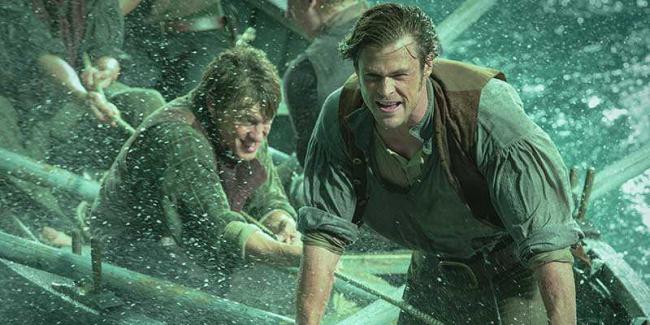 Chris Hemsworth in In the Heart of the Sea

In the Heart of the Sea is the story of Herman Melville taking notes from a sailor, Thomas Nickerson, who survived a whaling expedition that ended in disaster. His account of the whaling ship Essex's demise inspired Melville's fictional classic American novel, "Moby Dick." The story is told in flash back with occasional scenes of Melville and Nickerson having dramatic moments.

In 1820, the Essex set sail from Nantucket with the goal of finding whales to kill for their blubber as it was a valuable energy source.This real-life maritime tale follows the crew as they make a kill. We are shown all of the gore involved in such an effort. We see them deal with storms and some minor personality conflicts. It all leads to a  confrontation between the Essex and a large white whale and then to the harrowing aftermath.

Men stranded at sea is a tale of woe as old as they come. What can make these stories interesting are the men themselves and how they deal with the hardship of starvation, impending doom and each other. In the Heart of the Sea does not break any new ground or bring up any issues we have not already heard of in other tales of survival.

In an effort to create emotional responses from the audience, we are shown several relationships in the hopes that we may connect with at least one of them. The problem is that there are too many relationships touched on but none ever come close to being fully explored. We have the first mate, Owen Chase, who leaves behind a pregnant wife. He does not get along with the captain, who got the assignment because he is related to the ship's owner. Chase has a friend on board with whom he shares some dramatic moments. Melville and an elderly Nickerson reveal their vulnerabilities to each other. Finally, there is young Thomas Nickerson who is green but eager to learn. He looks on Chase with almost hero like worship. Unfortunately, not enough time is spent on any of the relationships to make any of them fully interesting.

We are intended to pray for Chase to be reunited with his wife, but she knows his job takes him away for months at a time so it is not as if she is expecting him home anytime soon. We are supposed to feel the tension between Chase and the Captain, whose job Chase felt should have been his. We should feel something for Chase seeing his friend near death. The only relationship that feels as if it has a satisfactory resolution is the one between Melville and the elderly Nickerson.

The story should have centered completely on young Thomas. He is telling the story after all. How does he have privy to conversations he was never present at? If we were shown this adventure through his eyes alone, we could have had an emotional anchor to cling to. Instead, we just drift from one shallow story line to another. We should have seen Chase's and the captain's relationship through his perspective.

Chase and the Captain's reactions to each other reminded me of Fletcher Christian and Captain Bligh. And speaking of the HMS Bounty, at one point the survivors of the Essex find temporary shelter on an uninhabitable island. If they had drifted some 100 miles in a different direction they would have landed on the very island that the mutineers of the Bounty were hiding on. Talk about a possible interesting crossover.

Every scene that features whales is exciting but that is truly just a small portion of the story. This is an adventure tale and told through the eyes of a teenage boy on his first voyage, it all could have seemed exciting and new. However, as it is told, most of what we get here is frankly old news and none too thrilling. 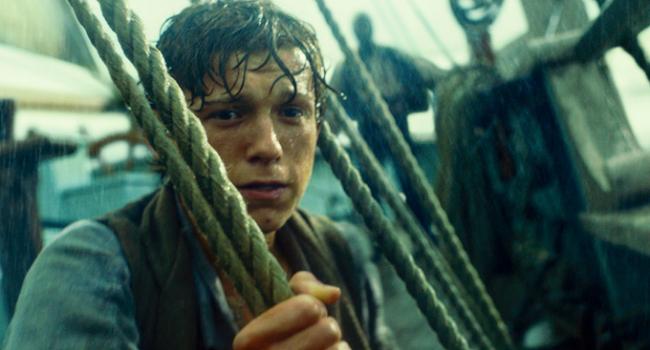 Tom Holland in In the Heart of the Sea.

My first thought when seeing the previews for this movie was, "Who is the target audience for this movie?" As Eric said, tales of the sea are as old as time, but they fell out fashion in the cinema when Errol Flynn died. Even director Ron Howard was reluctant to take on the film and was only talked into it by his star, Chris Hemsworth. He should have stuck with his initial instinct.

I had a similar thought to Eric about the framing device. The story is supposedly told from Nickerson's point of view, but when he begins his tale, the very first scene we see in flashback is one that he wouldn't have known about, as are many of the subsequent ones. And are we expected to believe that this junior cabin boy (or whatever his official title was) was privy to the politics going on between the owners of the ship and it's captain and first mate? It makes the framing device pointless and also historically inaccurate, since the tale of the Essex was just one of the sources used by Melville as inspiration for Moby Dick. Interestingly, the original British critics of Moby Dick complained of the same problem upon the book's publication in 1851, with one review saying, "nothing should be introduced into a novel which it is physically impossible for the writer to have known: thus, he must not describe the conversation of miners in a pit if they all perish."

Chase and Pollard's relationship begins with hints of the Bligh/Christian relationship, as Eric noted, but it quickly fizzles out after a promising start. The two argue over how to handle a storm and Captain Pollard insults Chase's family, but once the whale shows up, the script seems to forget all about their hatred for each other, and every other bit of character development for that matter. It goes from a poorly done Mutiny on the Bounty to a poorly done Jaws. Or maybe I should say Jaws 4, since this time it's apparently personal, with the whale showing a human doggedness when it comes to pursuing the crew, even sharing prolonged eye contact with Hemsworth's character in one scene.

The scenes with the whales are exciting and well filmed, for the most part. Surprisingly, it's the opening scenes of town life in 1820 that are poorly filmed. The CGI is quite obvious in every wide shot of the town. They'd have been better served by simply not including them.

The cast does a decent job. Hemsworth is basically a pretty face and a set of muscles, but he gets the job done. Brendan Gleeson is a great character actor and I'm a fan of Ben Whishaw, but their scenes should have been cut. The framing device isn't needed and it adds more to the running time than it does to the story.

After finishing the film, I'm still wondering who its target audience was. Not fans of great cinema certainly.

In the Heart of the Sea

The novel of the same name on which this movie was based, was itself based on two published firsthand accounts of the 1820 voyage of the ill-fated Essex whaling ship. One was written by first mate Owen Chase and was published just a few years after the events depicted. The other source was written by cabin boy Thomas Nickerson in 1876. His manuscript was lost until 1960 and not published until 1984. It is possible that Nickerson read Chase's book, which would explain how he knew about certain conversations he wasn't privy too. But even so I think Eric had the right idea when he suggested the movie should have been told entirely from Nickerson's point of view.

It would have cut 30 minutes from the running time and made the story more personal. I would keep the framing device as is, since the scenes between Melville and the older Nickerson provide the emotional catharsis of the picture. What should have been cut are Chase's farewell to his wife as well as the scene where Chase learns he isn't going to command his own ship. We should have learned whatever we needed to know about the other crew members through the cabin boy's eyes. We also could have lost the political scenes of Chase and Pollard after the rescue.

I still enjoyed this movie. It's quite old fashioned and has plenty of action. The scenes with the whale are nicely done and -other than the eye contact moment Scott mentioned- relatively realistic. It's only that final appearance by the whale that “jumps the shark” so to speak. We are supposed to believe that this mammal followed these men for hundreds of nautical miles, and for many weeks, before surfacing, giving Chase the eye and then disappearing with a dramatic sweep of its tail. I don't think so.

The story of the whaling ship Essex is fodder for a great adventure movie. Unfortunately Ron Howard's In the Heart of the Sea isn't it.