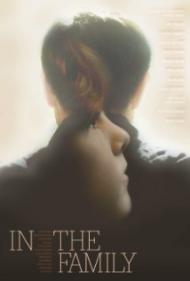 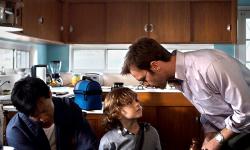 Patrick Wang, Sebastian Banes, and Trevor St. John are In the Family.

In the Family is a remarkable film debut. Patrick Wang wrote, produced, directed and stars in this low key family drama. It tells the story of a family living in rural Tennessee. Chip Hines is a precocious 6-year-old boy living with his 2 dads, Cody and Joey. His mother died during childbirth and he has only known life with his 2 fathers. When Cody (Chip's biological father) dies suddenly in a car accident it is revealed that he never updated his will after falling in love with Joey and therefore the legal custody of Chip goes to Cody's married sister. In the Family tells the story of Joey's struggle to regain custody of his son and to reconnect with Cody's previously accepting family.

One interesting quality about In the Family is the fact that although it deals with issues of same sex relationships and race relations (Patrick Wang, who plays Joey, is of Chinese descent) the words “Gay” and “Asian” are never spoken in the movie. What we get instead are reaction shots of the various people who come in and out of Joey's and Chip's lives. It is easy enough to read either disapproval or acceptance on their faces.

Without being preachy In the Family shows us just how strong the bond between parents and their children is. I'm not a parent but this movie helped me imagine what it would be like to raise a child from infancy only to have them taken away suddenly at the age of 6. Joey takes for granted the fact that he is Chip's father. He is completely blindsided when he loses Chip. He has no legal recourse as same sex relationships are not legally recognized in Tennessee and he never legally adopted Chip. He eventually finds a lawyer willing to take on his case although they face an uphill battle.

Interspersed with scenes of Joey's struggle to regain custody of his son are scenes showing how Joey and Cody fell in love. Cody is played by Trevor St. John whom soap opera fans will recognize from his many years on daytime's One Life to Live. He gives a heartfelt performance that defies stereotypes.

In the Family was shot in just 15 days. Wang uses extended takes and odd camera setups. In some scenes he purposely cuts off the character's heads and in others the camera stays focused on one character while the action of the scene takes place outside of the camera range. With a run time of nearly 3 hours In the Family takes its time unfolding. But it is one of the most brutally honest and emotionally draining films I've ever seen.

The young boy who plays Chip is wonderful. Check out the scene that takes place right after Joey and Chip arrive home from Cody's memorial service. It was shot in one long take. While Joey sits despondently at the kitchen table Chip goes about getting himself a glass of soda from the refrigerator and a beer for his dad. He clinks the beer bottle against his glass before handing it over to Joey. Joey takes a sip, looks lovingly at his son as the hint of a smile creeps over his face. It is a brilliant, brilliant scene.

In the Family was one of the last movies reviewed by the late Roger Ebert. He gave it a glowing review and helped it reach a much wider audience. It was nominated for Best First Feature at the Independent Spirit Awards. I was deeply moved by In the Family and highly recommend it for anyone looking for a refreshingly original and thought provoking human drama. 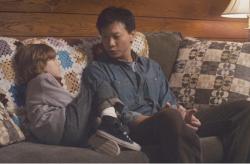 Sebastian Banes and Patrick Wang in In the Family

I understand why my brother Patrick was deeply moved by In the Family but I hardly found it to be the masterpiece he describes. There is a compelling story here about love and loss but at 169 minutes, Patrick Wang never knew when to yell, “Cut.” In fact, I was not too impressed about when he chose to call, “Action.”

Wang chose to give us many slow quiet moments instead of the big showy ones. Instead of the crying and wailing at the funeral, we get Wang sitting almost comatose at the table, while Chip mills about. Not a single word is spoken. When Joey hears the news of Cody’s death, the camera is behind him and from a distance. We do not see or hear his reaction. Was this an artistic decision or a lack of Wang’s confidence in his own acting? Either way, it stole an important emotional moment from the audience.

Too often Wang chose to film from behind the back of his head while others talked to him or to film himself from a distance. This likely made his job as both actor and director to be much easier but it does not make for a compelling viewing. My brother may be able to appreciate Wang’s direction but I found it to be lazy.

Wang should have played the part of Cody and St. John should have played Joey. That would have accomplished a couple of things. Wang would have had less screen time, allowing him more time to better focus on camera set ups and direction. Did all of his camera shots have to be stationary? Most importantly, we would have heard less of Wang’s horrible accent.

As a father, it would tear me up to lose my sons. I wanted to feel Joey’s pain, and imagined I would, but Wang’s performance never pulled me in. Joey gets life’s rug pulled out from under him. I saw his frustration and anger because the script calls for it, but his direction and acting does not do the story any favors. Even the moment of truth, the one we wait far too long for, is over almost as soon as it starts.

I get that my brother being a homosexual, would find much to appreciate in this film, but a great movie should be accessible to everyone. In the Family is a film that wants to open eyes and may have, but it could have accomplished so much more with a professional eye behind the camera and a much tighter editing. This was a great effort by Wang but the old saying of, “Less is more.” is extremely appropriate here.