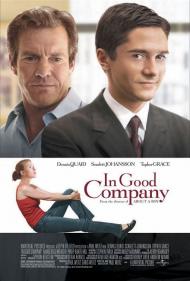 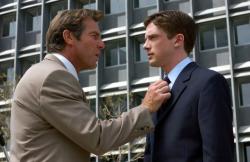 Dennis Quaid and Topher Grace in In Good Company.

In Good Company is going to be remembered as the movie that pushed Topher Grace from sitcom star to movie star. Sure, he's done movies before this one, but this is the first big movie of quality where he plays one of the lead characters. And unlike his That 70s Show co-star, Ashton Kutcher, Grace's stardom is well earned, as besides being just a celebrity, he's also an actor.

In the film, Grace plays Carter, a young executive promoted to the head of advertising at a sports magazine following a corporate takeover. The man he replaces and who is now his second-in-command is Dan (Quaid), an old school businessman who still believes in the value of a deal made with a handshake. Although he's rightly insulted by his demotion and concerned at the prospect of working for someone half his age, Dan still has bills to pay, with his daughter (Johansson) attending NYU, his wife pregnant with a new baby, and so he can not resign his position.

The movie does a good job of combining humor with drama. While there are laughs to be had as Dan learns to deal with his young boss and Carter learns that there's more to business than just making money, the movie also deals at least lightly with the more serious side of things. Dan is forced to fire several of the people he's worked with for many years and Carter's wife leaves him when he spends too much time at work.

This latter event leads to Carter leeching on to a dinner invite to Dan's house where he meets Dan's daughter and they begin a secret relationship behind Dan's back. But the real relationship in this movie remains between Dan and Carter. The romance between Topher and Scarlett's characters is secondary as is her role in the movie.

Towards the end of the film, the movie does have one moment of preachiness where it teeters on the edge of sappiness. The moment comes when the head of the conglomerate makes an appearance at the magazine's office and Dan makes a short speech about honor in business. The idea behind the speech is fine, but it doesn't ring true. Fortunately it's a brief moment and passes quickly.

While clearly, Dennis Quaid is the star and it's good to see him continue his string of good roles now that his career is back on track, it is Grace who walks away with the movie and climbs another rung towards the Hollywood A-list. 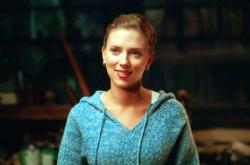 Scarlett Johansson in In Good Company.

Grace's career may very well eclipse Kutcher's, but this is not the movie that will make him a household name. He does a great job, but the movie is not that memorable.

So often Hollywood movie's portray capitalism as an evil entity. Refreshingly enough, In Good Company shows some of the unfortunate realities of business while not demonizing it. As Scott wrote, "Carter learns that there's more to business than just making money." Actually, the only reason for a "business" is to make money, but Carter does learn that businesses are made up of real people with real lives and responsibilities and that a job is a huge part of everyone's personal life.

Carter starts the movie as a gung-ho up and coming business man. By the end of the movie he has a change of heart and the movie ends on an ambiguous note. His future is unsure. His love affair left unfulfilled. Carter's romance with Alex had some potential spark. "You're kind of a bizarrely honest guy." she says to Carter at one point, who then replies, "No, just around you." Ending this movie as it is makes the film incomplete. You do not know Carter's future. You see him smile at the end so we assume he will be happy, but then he smiled while he was in business as well and that proved a bust, so everything is up in the air.