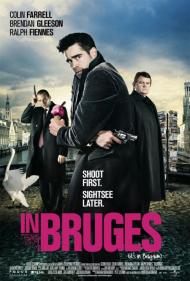 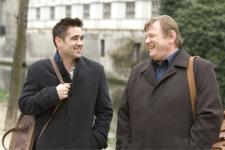 In Bruges is one of my favorite movies of 2008. It's black comedy with some laugh out loud moments that manges to mix in a few moments of drama as well.

Colin Farrell and Brendan Gleeson star as Ray and Ken, two hitman hiding out in Bruges, Belgium following a hit job that went horribly wrong. Ray is the younger, more inexperienced hitman while Ken is the old hand. Ken is happy to be in Bruges and enjoys sightseeing around the medieval part of town, while Ray is bored. They bicker and sightsee and bicker about sightseeing while they wait for their boss, Harry (Fiennes) to give them a call and tell them what to do next. The two share various adventures, involving a midget, a Canadian, a couple of prostitutes, an attractive young drug dealer and various other eccentric characters while they wait.

The humor in the movie comes from the terrific dialogue by writer/director Martin McDonagh, who makes his feature film directorial debut with this movie. Prior to directing he was a playwright and indeed this movie has a bit of a play feel. Not in its setting, but in the smart use of dialogue and focus on a limited number of characters.

Farrell, Gleeson and Fiennes all give great performances. Gleeson and Farrell have a terrific chemistry together. Their banter is the highlight of the movie and contains some very funny moments. As the drama mounts and the climax of the movie approaches it is their relationship that gives the movie its emotional center.

I've never really been a Colin Farrell fan. He's an okay actor, but he's never been one of my favorites. This movie might just have changed that. He should do more comedies, at least of this nature. He's funny and has good timing and he's a good enough actor to handle the more dramatic moments.

The city of Bruges came as a surprise as well. I have to guess that tourism to the city rose after this movie was released. I know it made me want to visit it. As one character says about seeing the city, "I know I'm awake but it feels like I'm in a dream." It certainly has a fairytale quality about it as one of the other characters also says. While I'm sure it isn't all as pretty as shown here, enough of it is that I'd like to see it for myself.

Not a comedy for everyone, but definitely a comedy for some, especially those who enjoy dark, un-politically correct comedy and who don't mind a bit of blood and violence amongst the laughs.

The absolutely best thing about In Bruges is the dialogue. For me, it is always in the lines in a movie where I find the real entertainment and this film delivers some of the best character exchanges of spoken lines ever.

Some of these will give away key plot points so be aware. Near the end of the movie Ray is about to kill himself just as Ken was about to kill him. “Oh, my God... you were gonna kill me.” Ray says to Ken who has a gun, and responds, “No, I wa - You were gonna kill yourself!” “Well... I'm allowed.” Ray says, but is corrected by Ken, “No, you're not!” “What?” says Ray “I'm not allowed, and you are? How's that fair?”

Martin McDonagh certainly has strong opinions of Americans. One scene features a fat, foul mouthed American family. Another scene has Ken ask a guy, “You from the States?” The guy answers, “Yeah. But don't hold it against me.” Ken adds, “I'll try not to... Just try not to say anything too loud or crass.”

My favorite funny moment, and it did cause me to spit pop out of my nose, was when Ray hits the woman in the restaurant. It is funnier than I make it sound because several scenes earlier Ray explained to his prostitute, cocaine dealing, sort of girlfriend, “I would never hit a woman, Chloe. - I'd hit a woman who was trying to hit me with a bottle.” Hey, I like dark humor.

The movie works very well as both a drama and a comedy. Something many movies try but damn few succeed at. At one point Ray is crying, “I killed a little boy!” Ken hugs Ray and says, “Then save the next little boy. Just go away somewhere, get out of this business, and try to do something good. You're not going to help anybody dead. You're not going to bring that boy back. But you might save the next one.” It is a very well acted and dramatic scene, but then Ray complains, “What am I going to be, a doctor? You need exams.”

I hope Martin McDonagh has plenty more fine work ahead of him.

Good movie, but not that funny to me.

Yes, the dialogue is the best thing about this movie. My personal favorite line was, “If I grew up on a farm, and was retarded, Bruges might impress me but I didn't, so it doesn't.” Like Ken, and unlike Ray, I loved the town of Bruges. It is a magical, medieval place.

Overall I didn’t like the movie as much as my brothers. I was certainly entertained but I didn’t find it as funny as either Eric or Scott. Everyone’s sense of humor is different of course and this type is not my cup of tea. For me it worked best as a dramatic thriller.

The acting is first rate. Colin Farrell has the looks but Brendan Gleeson steals the movie from him. Ken, the hit-man tourist looking for “Culture”, was by far the more interesting character. In Bruges like The Godfather makes you sympathize with cold-blooded killers. I just didn’t laugh very often.

OK, here's the thing. I like my dark comedies as farce, like Arsenic and Old Lace or satire, such as Dr. Strangelove. The humor in In Bruges sometimes took me out of the reality of the situations. Take the scene pictured in my review. Yes, it's funny, but in such a tense, serious situation it seemed a bit contrived. One minute they are real people and the next they are doing a routine.