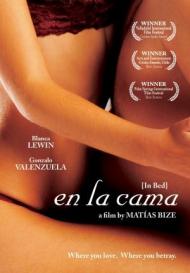 In Bed (En la cama) is a brilliant character driven story of two people romantically connecting over a short period of time.  The entire film takes place in a hotel room and the only characters shown are Daniela and Bruno.  They spend a night together talking and having sex every 20 minutes or so.   The sex is graphic but it is not as revealing as their conversation.  I was easily caught up in this tiny world of two people having a revelatory night.

I loved this film, but it is not exactly original.  Julie Delpy and Ethan Hawke met and spent the night in Before Sunrise (1995), only with a lot less sex and lots more clothes.  It is very chaste and intellectual compared to In Bed.   Australia gave us Better than Sex in 2000.  A good looking couple meet and spend all kinds of time in her apartment screwing, falling in love and discovering the difference between fucking and making love.  They each narrate into the camera their thoughts and feelings.  It is the most female friendly of the genre.

They laugh, talk about movies and have a pillow fight.  The have a disagreement, then make up.  They reveal things about their past and future.  They each get a call while the other intently listens in.  They snoop into each others purse and wallet.  We clearly see them start to imagine a possible future with the other.  We see an entire relationship condensed into one night.

The actors spend the entire movie nude or in their underwear.  Sure this can be titillating, but it also shows them as vulnerable.  Being naked is physically exposing yourself to someone, just as conversation exposes yourself emotionally.  As in Before Sunrise they learn about each other through dialogue, but by having the actors wear little to no clothes makes their revelations and discoveries about each other seem all the more raw.

In Bed is a very honest look at two people opening themselves up in the most personal manner.  It is definitely for mature audiences.  It intentionally or unintentionally took aspects from other movies and improved on all of them.  It may not be completely original but it is also like nothing you will find coming out of Hollywood.

Eric, I was not as enamored with this film as you were. Sure it's a realistic look at an evening spent together in bed by two strangers, and both actors do a good job in these very intimate roles, but the conversations they have are far from profound and the story never really goes anywhere. A movie such as this, that relies so heavily on the interactions between two characters, needed a better script. Daniela and Bruno are nice enough average people but neither is particularly fascinating.

At one point Bruno and Daniela are discussing what kind of movie they would make if they could. Bruno has a theory about personality types based on the movie genre a person favors. Bruno says that if he owned a hotel he would put in hidden cameras because he would love to see what real people do when they are alone together. Hmm, he just described the movie he's in.

The emotions these two share and evoke in each other ring true. Bruno reveals an intimate secret about his past while Daniela admits the truth about her future, which Bruno had already discovered while snooping in her purse. With two mostly-naked, attractive people to look at and plenty of graphic sex going on this movie holds your attention. But I was expecting more based on Eric's glowing review.

I will give the director and the two brave stars credit. They did successfully recreate a believable night-long sexual encounter between two strangers. Still, although it runs only 84 minutes, In Bed doesn't have enough story to support a feature length movie. It would have made for a much more satisfying short. In Bed is more interesting than it is entertaining. 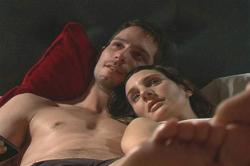 Patrick, rarely have I found myself in such complete and utter agreement with you. Reading your review was like reading my thoughts written out on the screen. This is a nice enough film with two likable characters, but neither one is particularly interesting, profound or unique.

Also like you, my immediate thought when it ended was that it was a good idea for a short, but was stretched very thin as a feature. The sex is titillating, but it's also filler.

You know how when you first meet someone and start developing feelings for them and you find everything about them to be fascinating? You can see that these two characters are in that stage.  Everything the other person says is of interest to them. Those on the outside of the relationship, i.e. the audience, aren't in the same state and therefore aren't as enamored of everything either character has to say.

The two actors do give good and believable performances. They create two likable, three dimensional characters, neither one of whom I wanted to see get hurt.

To be honest this felt like a student film to me. There's just not enough substance to it and I'm still puzzling over why you loved it so much, Eric. 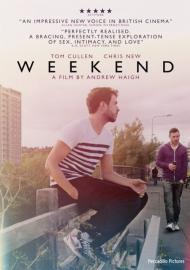