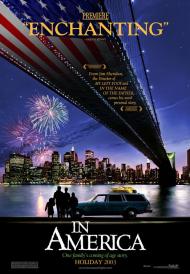 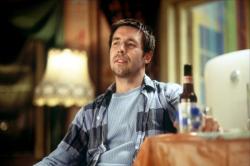 Paddy Considine in In America.

The family you see on the screen in In America is so incredibly genuine, it feels like you are watching your neighbors or a family that you met at the grocery store. This makes sense when you consider that writer/director Jim Sheridan (My Left Foot, In the Name of the Father) peppered the script with true-life events from his past and the fact that real life sisters, Sarah and Emma Bolger, play sisters in the movie. If you're not yet familiar with their names, don't worry, you soon will be. These kids have acting chops in spades. The parents aren't bad either as portrayed by Samantha Morton (Sweet and Lowdown, Minority Report) and Paddy Considine (24 Hour Party People). Clearly they gelled as a unit, and as a family give a truly impressive performance. In fact the entire cast is great; including Djimon Hounsou (Amistad, Gladiator) as the mystical Mateo.

In America tells the story of Johnny and Sarah (no last name is given) a young couple who emigrate from Ireland to the United States with their two daughters; older sister Christy and younger sister Ariel. Having very little money, they move into a rundown tenement in Manhattan's Hell's Kitchen. A squalid neighborhood peopled with drug dealers and prostitutes. On the floor below them, with the words - Stay Away - painted in big yellow letters on his door, lives the man who screams.

As it turns out, although they are poor, this family has come to America as much to heal, as for economic reasons, having recently suffered the death of their youngest child. A four-year-old boy named Frankie. The struggle to stay above water financially, coupled with the daunting task of adjusting to their new environment, forces the family's collective wound to the surface. At the beginning of the movie each one of them has a different form of denial about Frankie's death. Johnny is numb, no longer able to laugh or cry he spends his days going through the motions of life. Sarah has reacted by thinking only of her two remaining children, constantly pleading with Johnny to 'pretend to be happy for the girls'. As a desperate measure to replace Frankie, she gets pregnant, even though doctors have warned her against it. Christy, the oldest daughter, has internalized her grief. She constantly carries around a camcorder on which she has Frankie's image. Six-year-old Ariel, the family clown, still talks to Frankie.

On their first Halloween in the new world, the girls trick-or-treat at the 'Stay Away' door and it changes their lives forever. Unfortunately it changes the movie as well; the plot veers dangerously close to cheeseville. Mateo seems to have stepped off the pages of a Stephen King book – he's the one with 'the shining'. It is a testament to Jim Sheridan's directing that he doesn't let this flaw in his writing destroy his movie; it remains, in all other aspects, engrossing and true to life.

In America has some funny moments too, but the best thing about it is that in spite of a few clichés, it never gets schmaltzy. It's a tearjerker for sure, but one so organically wrought that it leaves you emotionally drained rather than filled with the sickly sweet glow of pure undiluted sentiment. 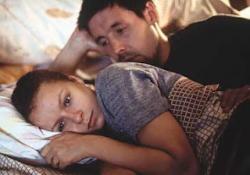 Samantha Morton and Paddy Considine in In America.

The only part of Patrick's review that I disagree with are his comments that Mateo "seems to have stepped off the pages of a Stephen King book - he's the one with 'the shining'". Yes, Mateo does play the wise man who offers spiritual advice to the members of the family, but unless I blinked and missed something, I don't remember anything supernatural happening.

That aside, Patrick's review captures this movie perfectly, leaving me very little to add. The strong cast that portray this family of illegal immigrants (its funny but you just never hear about the illegal Irish population, do you?), draw you into the lives of their characters. Jim Sheridan's script, which he wrote with his own two daughters, pulls you in even further.

The daughters, Sarah and Emma Bolger, steal this movie. They both, but particularly Sarah as Kristy, act well beyond their age, and are the heart of the family and this film. It seems wrong somehow when a child competes with adults for an Oscar, but Sarah Bolger could easily hold her own.

Eric once wrote that the most important thing in a movie is that it contain characters that you can care about. Rarely, have I felt so much or cared so deeply for characters in a movie as I did with those in In America. And that is what makes this one of the best movies of 2003, if not the best. 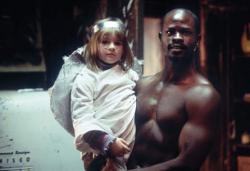 Djimon Hounsou in In America.

I wanted to take Johnny out for a beer and a long talk. As a father of two children who are really close to the ages of the kids in this movie, I related to Johnny in a huge way. Except that I am not an illegal alien.

Paddy Considine portrays this father, Johnny, in the most brilliantly accurate form. Never before have I watched a movie about a father and felt so completely satisfied with how it was done. Johnny rolls with life's punches. Sometimes he wins, such as when he provides an air conditioner for his sweltering family, sometimes he loses, such as when the bills become overwhelming. He has moments of happiness and moments of despair.

One quick moment in the movie defines fatherhood better than any I have ever seen. Things start to look up for Johnny when his oldest daughter volunteers to donate blood to her baby sister. As he is waiting in the hospital hallway a friend takes his youngest daughter home. Ahh, Dad has but a nanosecond of peace because just as the friend is walking away with his sleepy daughter, a hospital official walks by and says to him; "Your check bounced!"

As my brothers have written, the entire cast is great. However, my personal favorite is Paddy Considine. He does such an amazing job portraying this emotionally wounded, stressed father. He plays him as an average Joe who just wants a better life. The final scene where he finally feels had me crying with him.

I have never been touched by a movie this way before.