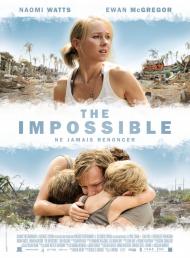 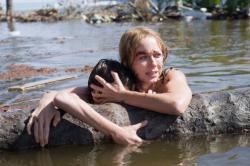 Naomi Watts and Tom Holland in The Impossible.

The tsunamis generated by the massive earthquake that struck in the Indian ocean, off the coast of Sumatra on December 26th, 2004 killed over 230,000 people. The Impossible tells the true story of one family's experience of that tragic event.

Naomi Watts and Ewan McGregor play married couple Maria and Henry. Together with their three sons; Lucas, Thomas and Simon, they go on vacation to a tropical resort in Thailand. Their happy holiday in the sun is shattered, quite literally, by a giant wave that sweeps over the resort, smashing everything in its wake and separating the family into two groups. Maria and Lucas go one way, while Henry, Thomas and Simon go another. The rest of the film tells of their trials and tribulations as they try to find each other again.

It is the disaster film aspects of The Impossible that are its greatest strengths. The 20 minutes or so involving the actual tsunami strike are gripping and tense. The battering Maria goes through in the water as she tries to rescue herself and her son, evokes a visceral reaction. You will wince and grimace right along with her as she struggles to survive. The devastation is impressively displayed and the power of Mother Nature is indeed, awe inspiring.

Once that portion of the film is done however, the movie goes down hill. It very quickly moves into soap opera, melodramatic moments of emotional manipulation. Every sequence after it goes something like this. A scene is setup so that you think one of the family members is dead. It continues just long enough until you're beat over the head by the idea that one of them is gone, often accompanied by building strings on the soundtrack, until suddenly it's revealed that they're not dead after all. It's like emotional porn, with tears as the money shot. Each of these scenes keep getting bigger and bigger until the eventual group shot where everyone's crying.

The cast does do a good job with what they're given. Naomi Watts is a particular standout, especially during the first half. The scenes between her and young Tom Holland, who plays her oldest son, are the strongest in the film. McGregor has one particularly emotional moment on a cellphone, but otherwise takes a backseat to Watts.

Anyone looking for a movie about the widespread effect of the tsunami, will be disappointed. This is a movie from one white, upper class, European family's perspective. Although they go through hell in this movie, they do get to fly away in a private plane to topflight medical care in Singapore, while 1.7 million of the indigenous population remained homeless. The producers of the film have even said in interviews that to obtain funding they changed the nationality of the family from Spanish, as they were in real life, to English, so they could hire big name, more bankable stars. Apparently Javier Bardem and Penelope Cruz aren't as internationally viable as waspy looking Ewan McGregor and Naomi Watts.

With a better script, this could have been a much better film. The direction, particularly during the disaster sequences, is terrific and so is the acting. Along with the emotional manipulation, the dialogue sounds awkward and not at all how people really speak. It really drags down the film.

Those who don't mind a little emotional manipulation, may enjoy this movie more than I did. Personally, I found it a little overcooked. 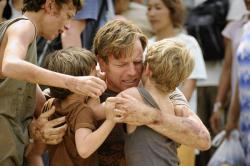 Scott, I agree with your point about the filmmakers' decision to change the nationality of the central family. According to Wikipedia, director Juan Antonio Bayona (who is Spanish) claimed he chose not to specify their nationality in order to make the film universal. But they are clearly of European descent so I don't understand his point about not specifying their nationality. How is a white family any more universal than a Spanish family? And since they make a point, at the beginning of the movie, of stressing that this is a true story, it seems like an odd decision.

Also, as Scott suggested, the story virtually ignores the thousands of Thais that were killed or had their families devastated in the disaster. Nearly all of the survivors we see searching for family members or lying in hospital beds are white tourists. Did Juan Antonio Bayona assume the majority of Caucasians would only see this movie if it featured a family and cast that resembled themselves? Or was it a decision made solely by the money people? Either way it is insulting.

Now that I've got that out of the way, I will say the cast is terrific and their story is harrowing. I enjoyed this movie much more than Scott did. I didn't see the emotional manipulation he claims was present. Under these incredible circumstances it made sense and seemed organic to the story whenever one family member believed another to be dead. Their story is so gut wrenching that I was moved to tears several times, and a huge smile broke out on my face when they finally reunited as a family.

The pacing is quite good. The tsunami strikes within the first 15 minutes of the movie. We don't even have time to get to know the family members beforehand. We discover who they are as they struggle to survive against incredible odds. It really is miraculous that all five members of the family lived through this ordeal.

Naomi Watts gives a really gripping performance as the mother, intent on keeping herself and her oldest son alive, only to find herself being in return saved by her son. Young Tom Holland is wonderful as her intelligent teenaged son Lucas. Their scenes in the surging tidal waters at the beginning of the movie are some of the most realistic recreations of a disaster I've ever seen in any movie. Like all good disaster movies it puts you in their place and makes you contemplate just how heroically you would respond in a similar emergency.

Ewan McGregor is great as the father searching desperately for his wife and oldest son, hoping against all odds they have somehow survived. He has less screen time than Watts though, and his ordeal is not as terrifying. Look for the wonderful Geraldine Chaplin in a cameo as an old woman who comforts their middle child as he looks out for his younger brother while their dad is off searching frantically for their mother and older brother.

The Impossible is a very uplifting true story. It would be unbelievable if it hadn't actually happened. The final 10 minutes or so could have been edited. The movie should have ended at Maria's hospital bedside where she learns that her entire family has survived. Everything that comes after this scene is emotionally anticlimactic and superfluous to the story. But this is a minor complaint. The Impossible is one hell of a powerful movie, sure to produce a visceral reaction in the viewer. This true story, about the unquenchable human spirit, is one you won't soon forget. 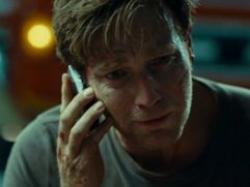 Ewan McGregor as Henry, making the hardest phone call of his life in The Impossible

I could not disagree more with Scott. The disaster film aspects of The Impossible are not its greatest strengths. Those scenes are astonishingly well filmed but they do not make the movie. Its greatest strength are the very scenes Scott referred to as, "melodramatic moments of emotional manipulation."

Both of my brothers seemed bothered by the fact that this film centered only on one family and not the entire populace. The point of this film is to show a disaster through the eyes of this one family. It does not ignore all the other deaths, it merely chose to make it personal. The characters in the film do not have a clue how wide spread the death and destruction is. The movie does make a point to show crowded hospitals and refugees on the sides of the roads.

A far as the emotional aspect of the story, I agree with Patrick. My wife and I cried when little Simon climbs down from the truck, and runs as fast as he can while yelling to his brother with all the power his lungs can produce. I broke down when Ewan McGregor calls home and breaks down. I was even moved by the man who loaned him the cell phone. His story is heart breaking as well.

McGregor does a great job, although his screen time is fairly limited. I will also echo Patrick and compliment Tom Holland on delivering a solid performance. Naomi Watts does all that is required of her. Which is to say she smiles at her family for the first fifteen minutes, yells for Lucas for the next ten minutes and then moans in pain the rest of the film.

Scott must have a tiny Grinch heart. I was caught up in the struggle of this family suddenly thrown into chaos. I would write that perhaps my affection for this film is due to me being a married father of two sons, but then Patrick loved it as well and he is childless. To paraphrase Christina Perri's Jar of Hearts, Scott, "You're gonna catch a cold From the ice inside your soul."

The nationality of the family is irrelevant. The movie never states where they are from. For the record, McGregor is Scottish and Watts is British, but could they not live in any country in the world? Strange that Scott made such a big deal out of their nationality while in his Argo review he ignored the fact that "waspy" Ben Affleck looks nothing like the short Tony Mendez who is of Mexican/American ancestry.