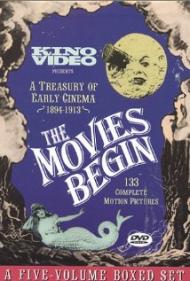 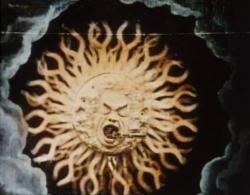 The sun swallows a train.

Georges Méliès was the first true genius of cinema. When most filmmakers were content to film simple glimpses of human activity he was creating fantastic theatrical storylines using elaborate costumes and sets. A former magician he specialized in trick photography using dissolves and the technique of stop motion to make objects or people seem to appear or disappear. He also created the science fiction/fantasy genres.

An Impossible Voyage is almost a sequel to the more famous A Trip to the Moon; both movies were adapted from Jules Verne stories. Like that movie it has a spoken word narration that explains the action taking place. Also like Trip to the Moon, Impossible Voyage features people going on a fantastic adventure that leads to outer space and beneath the sea. This movie was hand-tinted (meaning each frame was painted individually) which was the earliest type of color used in film. The process proved too painstaking, however, and it never really caught on.

The movie begins with the planning of an elaborate journey which will utilize a train, an automobile, several balloon dirigibles, and a submarine. The next scene is the mechanical preparations being made. This follows exactly the sequence of events from A Trip to the Moon.

In that movie a rocket lands on the moon which has a human face. It lands right in one of the moon’s eyes. In this movie the sun has a human face and a train being carried into space by the balloon dirigibles (it is called An Impossible Voyage after all) goes right into the sun’s open mouth.

Besides his trick photography Méliès was known for his whimsical slapstick type humor. In this movie the adventurers experience several seemingly deadly crashes. The narrator then calmly tells us that “fortunately everyone survived” or “no one was hurt”. These people even survive going into the sun by using a giant ice-box that they apparently brought along for just this purpose. They also survive being frozen and thawed back out.

With a 24 minute running time and color images An Impossible Voyage must have seemed like an epic fantasy adventure movie to audiences of 1904. Sadly it lacks the originality of A Trip to the Moon, it too closely copies that movie, which would remain the director’s masterpiece. Between 1896 and 1912 Georges Méliès made over 500 movies but by the start of the First World War he was out of the business completely. He died in 1938 at the age of 76. 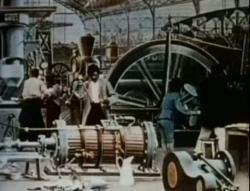 Georges Melies was the James Cameron of his day.  He was great at making inventive movies that took full advantage of the technology of the time and even pushed the envelope of what was possible onscreen.  What he wasn't so great at was creating characters that an audience could care about.  None of the adventurers in this movie have any distinguishing traits and so it doesn't generate emotional interest, merely a sense of wonder at the special effects.

Another thing Melies shared in common with Cameron was his willingness to make long movies.  As you say Patrick, at 24 minutes, this movie was an epic for the time.  And even though compared to other movies of the period this movie has a strong narrative, it's really quite a weak one and is merely a chance for Melies to throw his visual trickery on the screen.

He's very much infatuated with his own special effects and wants the audience to admire them.  The opening scene in the workshop, for instance, we are shown all the moving props and the camera lingers on them.  Later, a model train is shown moving across the screen and then it moves across in the other direction, closer to the camera.  It doesn't move the story along, but just shows off the model train a second time.  The whole short is in need of a tighter edit.

Perhaps it's unfair to criticize such a groundbreaking film from 1904 and if this movie didn't feel so derivative of his Trip to the Moon, I probably wouldn't be.  Like many sequels to come, this one has more in it and probably cost more, but it's inferior to the original. 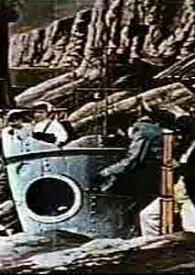 An impossible voyage comes to an end.

This movie is a case of running before you could walk.  As Scott wrote, their is no characterization.  Before Georges Melies attempted a lengthy fantasy film he should have created some characters.  The only one that stands out is the servant girl who does the slapstick.   I give him credit for trying, but the stationary camera was just to limiting for what he was going for.

Georges Melies was good at special effects for the time.   However, they mean little when it comes to a film narrative.  Obviously this guy was fascinated by science fiction, but he was hampered by the time period, making this movie more of a joke than exciting.  As William Shatner is credited as saying, "Special effects are just window dressing."

I love silent films, but not these types.  I prefer the ones taking place in contemporary  times.  Even if you do not like the story you can enjoy the history lesson unfolding before your eyes.