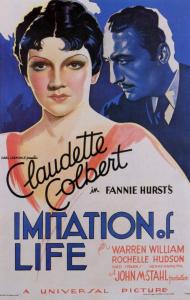 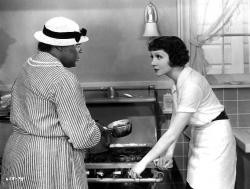 Louise Beavers and Claudette Colbert in Imitation of Life.

Imitation of Life is a true tearjerker in every sense of the word. It is the groundbreaking story of two women, one black and one white, who become friends and business partners. They also both happen to be widowed mothers with young daughters. The black woman's daughter looks white and is constantly trying to 'pass'. In the main thrust of the plot she disowns her mother, breaking her heart, then overcome with grief and guilt, shows up at her mother's funeral screaming and begging her forgiveness.

Claudette Colbert was having a great year in 1934. She won the Oscar for It Happened One Night, played Cleopatra, and starred in Imitation of Life. She looks every inch the star in this role, but somehow manages to radiate warmth and sincerity at the same time. Louise Beavers is Delilah. Although to modern viewers her role seems pathetic and insulting to people of color, she imbues the part with dignity, deep sadness, and flair. The movie really revolves around her.

Too much screen time is spent on Claudette Colbert and her beau Warren William and the silly misunderstanding with her daughter over her infatuation with him. If anything, by comparison, this makes the problems of the black characters even more real.

One of the most heart-wrenching moments occurs early in the movie when the two girls are still children. Delilah goes to pick up her daughter Peola from school, unaware that she is passing herself as a white child. The look on Peola's face when her black mother comes to her classroom looking for her is unforgettable. She tries to hide behind her book, but is quickly spotted. Humiliated, amidst the incredulous whispers of her classmates, "I didn't know she was colored", she runs home after cursing her mother.

Remade in the fifties by Douglas Sirk, with Lana Turner in the Colbert role and Juanita Moore in the Louise Beavers role, Imitation of Life remains a powerful and disturbing look at race relations in terms of where we, as a culture, have come from. 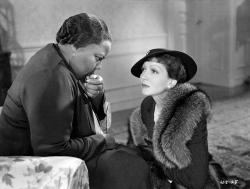 Louise Beavers and Claudette Colbert in Imitation of Life

Beatrice and Delilah are women in similar situations. Both are single mothers of young girls and both are in need of money. Beatrice comes up with a plan to open a pancake house with Delilah flipping the flap jacks and Beatrice supplying the syrup. They make a great partnership with Beatrice being the brains and negotiator while Delilah does the bulk of the work.

Patrick wrote that to modern audiences, the relationship between the two women may be insulting to people of color.  This is especially evident in the scene where Delilah rubs Beatrice’s feet one night. To me it smacks of a lesbian relationship, especially when Delilah says to Beatrice, as she works on her feet, “You need some lovin honey child.” Later when they start to make money, Delilah begs Beatrice not to force her to live in another home, stating she would rather stay and take care of Beatrice, no matter how rich they become. The best lesbian moment happens when Colbert kisses her attractive grown daughter Jessie, square on the lips.

The film shifts a bit to Delilah’s daughter Peola struggling with her heritage. I was reminded of an African American boy I went to elementary school with who hung out with white boys and liked rock n roll music. As a result, he was ostracized not by the white students but the other black students who called him a traitor to his race. Once while we were both sent to stand in the hall for doing something wrong in class, he told me that he wished he were white. I was not sure how to react to his statement at the time but I felt his frustration and it is likewise reflected here by Peola telling her mother, “I want to be white, like I look.”

I agree with Patrick that the story is fascinating when it stays on the friendship between Beatrice and Delilah or Peola. The relationship between Beatrice and Stephen is only mildly interesting when Jessie starts to like Stephen. The story of Peola is downright ground breaking. Hers is a story that is worthy of a debate. Is she black even if her skin is white? If so, then race is more than skin color and if it is more than skin color then where does the difference end? The moment an adult Peola tells her mother that she wants to go away and never acknowledge each other in public again is gut wrenching for me. What parent wants to hear that their grown child is ashamed of them

As Patrick mentioned, a remake was made in 1959. I think another remake should be considered where they just go ahead and make Beatrice and Delilah a lesbian couple. Maybe then we could have a scene where the white lady rubs the feet of the black woman. Hell, since they would be a lesbian couple, she could rub other body parts as well. 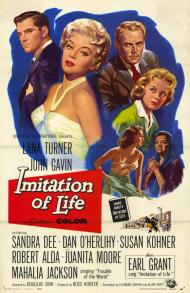