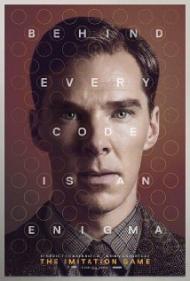 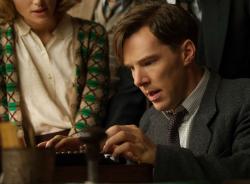 Benedict Cumberbatch in The Imitation Game.

This year's crop of leading actor award contenders just got a new front runner with Benedict Cumberbatch in the role of Alan Turing in The Imitation Game. It's a heartfelt and emotional performance that highlights the wartime career of Alan Turing, the man who Winston Churchill credited with doing more to win World War II than any other single individual.

The story is told at three different times in Turing's life. The main part of the story takes place during the war when mathematician Turing takes a job at Bletchley Park, the former radio factory that was used for the course of the war as the top secret home of the British codebreakers. Turing, who is portrayed as socially awkward as he is intelligent, rubs every member of his team the wrong way while building one of the world's first computers to crack the German Enigma machine. He is helped with his socializing skills by Joan Clarke (Knightley), the only female member of the team, who he befriends and eventually becomes engaged to in order for her to remain on the project.

We also see Turing as a child in the 1920s when he develops a crush on a male childhood friend. And we see Turing in the early 1950s when he is being investigated by the police as both a suspected Soviet spy and a homosexual, which was a punishable crime in the UK until 1967. Although the ending and Turing's fate is a matter of historical record, I won't give away the details here in case you are unfamiliar. I'll only say that it's a tragic ending and a shameful moment in history.

While the script is based on facts, they have been given the Hollywood treatment. In a way this is understandable. If the script remained true to just the facts it would be a dry movie about mathematicians and engineers that would only be of interest to other mathematicians and engineers. And so Joan's relationship to Alan is made more dramatic and her character is given a touch of glamour with the casting of Knightley. Tension is created between Turing and his superiors that leads to the Hollywood moment shown in the previews where Turing is threatened with being fired until his team steps in to say that if Turing goes, they go.

Perhaps the most disappointing aspect of the script is that while Turing is persecuted in the film for being gay, it shies away from actually showing him that way. The flashback to his childhood is kept perfectly chaste and in 1951 Alan mentions a homosexual act, but he is portrayed for the majority of the film as nearly asexual. I'm not suggesting we needed to see him engaged in sex, but it's notable that a film that condemns the treatment of homosexuals is so delicate about showing its lead as one. Instead, it plays it all quite safe by having Turing admit to being gay, but without ever showing him in a romantic or sexual situation with another man.

Whatever the film's flaws are however, they are more than made up for by Cumberbatch's performance. Although he's played a genius sociopath for a few years as TV's Sherlock Holmes, he rarely gets to show much emotion in that character. Here however, we see the cracks in the facade, culminating in his final scene, which might just be the moment that wins him his Oscar. Even before that moment though, he's quite brilliant as the quirky genius with a plethora of tics.

One of the most refreshing things about this Oscar buzz worthy film is that unlike so many such films, this one is actually entertaining. Sure, it's easy to see Hollywood through the history, but at least the gist of the story is true and it's about time Turing and his team received their due. And come Oscar time, Cumberbatch might too.

Benedict Cumberbatch as Alan Turing in The Imitation Game.

As a gay man I was a bit leery of this film after reading that it downplays Turing's homosexuality. After seeing the movie, I'm happy to say those worries were unfounded. Nowhere in the script does it portray Alan Turing as anything other than a gay man. His relationship with Joan Clarke may have been expanded upon for the screen but it is all explained by circumstance. In one scene Turing even admits to his fear of not being able to perform sexually with her. It's true that with the exception of his boyhood first love, the movie never delves particularly deeply into his romantic/sex life but then it isn't necessary for the story being told.

Benedict Cumberbatch gives a performance of quiet intensity and emotional purity. He gives voice to a man history tried to silence. It wasn't until 2013 that Queen Elizabeth II awarded Alan Turing a posthumous pardon and it was about damn time his story was widely known. As recently as the 1980s his role in ending WWII was still a fairly well-kept secret. In his famous play The Normal Heart, Larry Kramer has one of his characters mention the fact that a homosexual was responsible for the Allied victory in the war. While this might be an exaggeration his integral role in the eventual victory is an undisputed matter of historical fact. It goes to show how prejudice and small-mindedness can -at least temporarily- alter recorded history. Thankfully Alan Turing is finally being recognized as the hero he was.

This is Graham Moore's first screenplay and it's a story he had wanted to tell since the age of 14. He has a promising future ahead of him. He took what could easily have been a dry subject and made it dramatically compelling while staying true to the spirit of history. Sure he took dramatic license in a few instances but as this is a movie and not a documentary it works beautifully. He also has an ear for dialogue. The script contains intelligent, thought provoking ideas. In 2011 it topped the annual Black List of best un-produced Hollywood scripts.

I was incredibly moved by Alan Turing's story. The Imitation Game perfectly captures the irony of this man's life. By most accounts he played the single most crucial role in winning WWII and yet he was treated as a criminal and driven to suicide by the very government he saved. My favorite line from the movie is repeated several times. “Sometimes it is the people who no one imagines anything of who do the things that no one can imagine.” Alan Turing was one such man, and The Imitation Game is one of the year's best films. 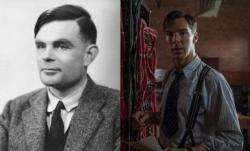 As portrayed by Benedict Cumberbatch, Alan Turing was one of the most sympathetic characters I have ever seen in film. He was a genius who dealt with things around him in a very literal way. He lacked social skills, a sense of humor and seemed, to some, to be without compassion. He understands how humanity works but was not able to play their games. "When people talk to each other, they never say what they mean. They say something else and you're expected to just know what they mean."

As a teenager, Turing was an outcast as one of the smartest boys in his school. He met and fell in love with another intelligent boy who died before graduation. Turing lost the one person who brought him joy and understood him, scarring him for the rest of his life.

Turing was a loner. Forcing him to work with others at Bletchley Park put him outside his comfort zone. He named his decoding machine “Christopher,” after the boy he loved in school. The building and defending of it goes to a very deep personal place. Turing is never shown having anyone to vent to or even talk to on a personal level.

Granted, as my brothers wrote, being a homosexual in that time and place was illegal so he had to keep it to himself. Consider that he is also British and you have a man with the emotional capacity of a robot. Thus it is credit to Cumberbatch’s performance that we see Turing express so many emotions even as he makes every effort to hide them. He brings to life the enigma that was Alan Turing, a man whose genius has been very far reaching.

I was reminded of Winston Churchill and how he was kicked to the curb after the war. He and Turing never shot a single gun but both played huge roles in the defeat of fascism. Both men have grown in stature since. As the closing narration attests, "His machine was never perfected, though it generated a whole field of research into what became known as "Turing Machines". Today we call them "computers".