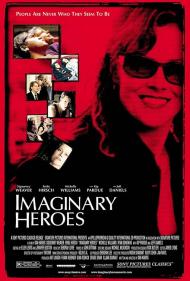 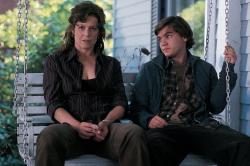 I remember my brother Eric once described 1980's Ordinary People as Ordinary Boring People. A description that could easily be applied to this year's similarly themed, Imaginary Heroes; a heavy drama so depressing and overly dramatic that by the film's end you might, like many of the characters in the movie, be contemplating suicide.

You know that you're not in for laughs when a movie opens with a suicide, the repercussions of which set the tone and plot for the rest of the movie. The death is that of the star athlete, eldest son in an already dysfunctional family. His suicide affects the family members in different ways. His father (Jeff Daniels) who apparently doted upon him with hopes for Olympic Gold in the future, turns to alcohol and a leave of absence from his job; attempting to keep his son's memory alive by insisting that a place be set for him each night at dinner. Mom (Sigourney Weaver) seems to be trying to recapture some of her lost youth, flirting with younger men and smoking marijuana. A mostly absent sister (Michelle Williams) seems least affected. Emile Hirsch as the younger son Tim is the star of the movie. His reaction to his brother's death is subdued. He experiments with drugs and shares a homosexual encounter with his best friend while high on ecstasy.

Rather than a traditional plot the movie merely covers a year in the life of the family. Over the course of the year various movie of week type ailments befall the characters and a few twists are thrown into the mix but do little to alleviate the dismal atmosphere that clings to every scene in the movie. Depression is fine up to a point. 2001's In the Bedroom was depressing, the aforementioned Ordinary People was depressing, but at least you cared about the characters. The same can't be said for this movie where, with the exception of possibly Sigourney Weaver as the mom, I didn't give a damn about any of them.

The one thing this movie does have going for it is one hell of a talented cast. Sigourney Weaver does a terrific job as does Jeff Daniels, although his is the less showy role. And Emile Hirsch, whose star is definitely on the rise, has the teen angst thing down pitch perfect. It's just a shame that all this talent is wasted on such bland, routine, material.

Any emotional journey requires some kind of payoff at the end of it, be it happy, sad or some other culminating emotion. By the end of Imaginary Heroes however, all you are left with is a blah feeling of, "What was the point?"