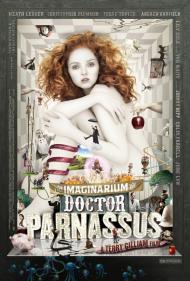 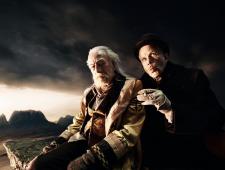 Christopher Plummer and Tom Waits make a deal as the Doctor and the Devil in The Imaginarium of Doctor Parnassus.

Anyone familiar with Terry Gilliam's films knows what to expect from them. He always provides interesting visuals and some twisted comedy and usually with elements of fantasy. With The Imaginarium Doctor Parnassus, he delivers more of the same, only with the advancement of CGI technology, he's able to take his flights of fancy to an entirely new level and the images here rival his crude Monty Python animations in terms of the surreal.

Of course the most publicized thing about Imaginarium is that it was the movie Heath Ledger was working on when he died. He had filmed enough of it and the story was fantastic enough that Gilliam was able to finish the movie with the aid of Johnny Depp, Jude Law and Colin Farrell. It's an interesting way of finishing the movie, but apart from adding some famous faces, it doesn't necessarily help the film, but it doesn't really hurt it either. The thing that surprised me is that despite all the publicity, Ledger isn't really even the star of the film. Christopher Plummer as the titular Doctor is the real star of the film. Ledger's part is more of the supporting role.

Also as in most of Gilliam's films, the writing is the weakest part of this movie. Gilliam always has intriguing ideas, but he often has trouble relating them to the audience and that's because audiences relate to characters not to special effects. We can be wowed and impressed by amazing visuals, but without central characters that we can connect to emotionally any movie will always be lacking (see Avatar for a prime example).

Ledger plays Tony, a guy that the doctor and party pick up on the way. Tony is the head of a large charity, but when the Doctor finds him he is hanging from a bridge with a back story that he claims not to remember. The Doctor quickly finds that Tony is a big help in collecting the souls and the Doctor's daughter quickly finds that she's falling for Tony.

The way that the Doctor collects souls is by using the power of his mind whereby, with the aid of a mirror, he is able to transport people into his imagination. It is here in the imagination where Gilliam's visuals take over. It is also here where Depp, Law and Farrell take over the part of Tony because Ledger had completed the scenes in the real world, but not filmed the fantasy sequences. Given the surreal nature of the visuals and the character of Tony, it actually makes perfect sense that he appears different in the imagination.

I was never bored by this movie. There's too much to look at for that to really happen, but at the same time I was never sucked into the story that much. I just didn't care that much about any of the characters.

Gilliam's best films are probably Brazil, The Fisher King and 12 Monkeys. Sure each of those movies contained some brilliant visuals, but at the heart of each of them is a central character that you care about and who drives the story. Something The Imaginarium of Doctor Parnassus is lacking. 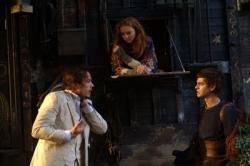 Heath Ledger, Lily Cole and Andrew Garfield in The Imaginarium of Doctor Parnassus.

In September 2009, contactmusic.com quoted Terry Gilliam as admitting to drug use, but said that his images on film are not inspired from being high.   I am not sure where he comes up with his images, but they certainly are eye popping.

Like Scott I found the characters tedious at worst and odd at best.  Why do they travel in a horse drawn wagon?  If he is practically immortal, why has he not come up with a better way to make money?  He has had centuries to figure it out.

The only thing worth watching are the scenes inside the imagination mirror.  I was wowed many times during those parts.  The scene where the devil dances with Valentina and when Tony number 2 climbs the ladder were two that impressed me the most.

As Scott wrote, without much plot or characters that make any sense, there is little to emotionally invest in The Imaginarium of Doctor Parnassus.  Beside directing, writing and producing, Gilliam is credited under production design and art direction.  It is in those last two jobs that he excels and in those two jobs that he should stay.  They are the areas where he is truly a master, drug induced or not.