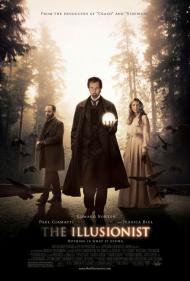 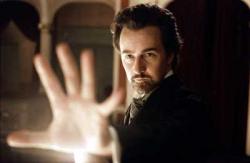 Edward Norton in The Illusionist.

The Illusionist is an interesting and well acted movie that could have used just a little lightening up. It is so dramatic and so serious that at times it sucks the fun out of its self.

Ed Norton stars as Eisenheim, the titular illusionist, living in Vienna around the turn of the last century. As we are told in flashback, he was born a peasant, fell in love with the local royalty's, royal daughter (Biel), but when they were driven apart by her parents, he fled Austria for parts unknown only to return as a grown man and a very talented magician, whose performances are now packing them into the seats in Vienna.

He becomes so noteworthy that soon the Crown Prince and official Royal Bastard, Leopold (Sewell), attends one of Eisenheim's shows, bringing along his royal fiancée, who is of course, Sophie, the girl that Eisenheim fell in love with as a boy. Dramatic and romantic entanglements ensue; climaxing with the death of one of the main characters, but are they really dead or is it all just an illusion?

It is up to Inspector Uhl to untangle the whole sorry business with an investigation that will test his morals and his loyalty. Playing Uhl, is Giamatti, who continues to prove that he is one of the most talented character actors of his generation. His scenes with the equally talented Norton are the best in the movie.

Sewell does a good job as the villainous Prince, a role that has become his signature performance. Biel, hoping to break past the bimbo roles, is adequate in her part, but not astonishing. This is Norton and Giamatti's movie, clearly.

Although the final scene of the movie reveals all that has happened before it, it doesn't really feel satisfying. It fails to explain every detail and the details that it does explain, couldn't definitely be known by the character who unravels them. Perhaps it would have been better to leave the audience to sort out what they think happened rather than trying to spoon-feed them the solution.

Intriguingly well acted, The Illusionist is a solid, if not spectacular movie. 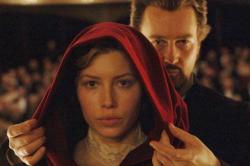 Jessica Biel and Edward Norton in The Illusionist.

Intriguingly well acted perhaps, but the plot contains my worse movie pet peeve. The audience invests time and emotion into an extended period of the movie only to find out that it was all fake. It's like one of those damn films where at the end of the movie it is revealed that it was all a dream or just a thought in someone's head. It completely renders the entire movie pointless.

The revelation scene that Scott complained about works just fine in the context of this film. Uhl simply imagines what must have happened. The film should have shown it all happening from that perspective the whole time. There would have been more tension in watching Eisenheim pull off his trick than simply finding out later that he did.