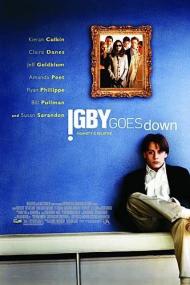 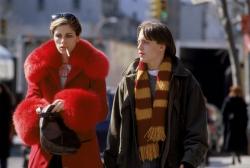 Amanda Peet and Kieran Culkin in Igby Goes Down.

J.D. Salinger has so much to answer for! Here we are yet again presented with a movie about a young man's coming of age that is a direct descendant of The Catcher in the Rye. Igby Goes Down can also be traced back to The Graduate, one scene at a party is nearly directly lifted from that other coming of age classic. Such a heritage means that Igby Goes Down has a great deal to live up to. The only question is, is it up to the challenge? The answer is a qualified yes.

The movie begins with the two Slocumb sons sitting at the deathbed of their mother waiting for her to die. When it doesn't seem to be happening fast enough, they help her along with a plastic bag over her face. The movie then moves back in time and tells how they got to this point. The opening scene is both funny and shocking and immediately sets the tone for the rest of the movie. Igby comes from an upper class dysfunctional family. He is constantly kicked out of prep schools and eventually he runs away and hides out in New York City. (See what I mean about Catcher in the Rye, now don't you?) He stays with his Godfather's mistress in a loft in SoHo so big, you could fit about ten average size New York apartments in it. While there, he meets a girl a few years older than himself and they have a brief affair. Eventually circumstance begin to sour and we are led back to that opening scene, but I won't give away how.

Several things make this movie stand out, but the best thing it has going for it is its cast. How, you might ask, did first time director Burr Steers get such a list of well knowns to appear in his freshman picture? Well, it might have something to do with his uncle being Gore Vidal (who even appears in a cameo role as a priest). But how he got them aside, this is a stellar cast, with everyone playing their roles to perfection. Sarandon is very good as the matriarch of the Slocumb family and Ryan Phillipe, who could play a snobby prep school role in his sleep), plays the over achieving older brother quite easily. Claire Daines (whatever happened to her?) plays the slightly off kilter college co-ed, involved with both brothers, so skillfully, that you wish they would delve into her character more.

The stand out award though, has to go the movie's star; Kieran Culkin. One of the Culkin clan, you might assume, as I did, that he was just another of the Culkin kids, indistinguishable from all the others. When actually he is quite good, holding the movie together all on his own. Managing to play the troubled youth without making him seem like a cliche. Handling drama and comedy with ease, this movie could prove to be the start of a major career for him.

The script is also good, both funny and dramatic. Personally, I enjoyed the humor more than the drama, but that might be just a personal preference, as I've always liked my comedy dark and twisted. The moment with the Lorna Luft impersonator waking Igby up by hitting him with a box of Lucky Charms and ensuing scene, made me laugh the hardest. ('I told you Lorna Luft was too obscure. Everybody thought you were just doing a bad Liza.')

What I didn't like about this movie, apart from the over used theme and slightly too familiar plot, was the tendency for the story to stand back from the characters without delving too deeply into them. Sometimes less is more, but in this case I would rather have seen more. Sarandon's character is supposed to be the bitch who screwed up Igby's life, but unless she did more than is shown, Igby should thank her for being such a good mother. And as I mentioned earlier, I would have liked to have learned more about Claire Daines' character, but instead she remains something of an enigma.

So while it is a great cast, including a breakout performance by its central character, and contains some truly funny and dramatic moments, the storyline is just too well trodden, without enough background to make some of these characters real, for it to become a classic. 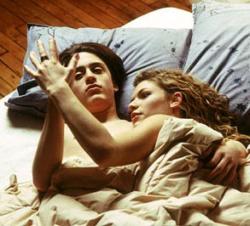 Kieran Culkin and Claire Danes in Igby Goes Down.

As Scott says Igby Goes Down is a well-crafted coming of age story that borrows liberally from other classic works in the genre. I agree that the acting is great and that the movie successfully balances the dramatic with the humorous. I also agree that the movie stands back somewhat from the characters; only I consider this an asset and not a liability as Scott claims.

Since Igby is the focal point of the story, the other characters are explained only as far as his understanding of them. Igby is in that peculiar stage of adolescence where all of the world's hypocrisies seem exaggerated and finding one's place in society is a truly frightening idea. Therefore what Scott dislikes about the movies' standoffishness from the characters is actually a brilliant way for the director to make us share Igby's sense of alienation. The dialogue is written like real speech and this too adds to the realism of the movie.

Claire Danes steals every scene she is in. I found her to be fascinating and incredibly sexy in this movie. In relatively few scenes she is able to show her characters guilty struggle between her genuine affection for Igby and her attraction to his over achieving brother.

Scott also says that the anger Igby feels for his mother is never actually justified. I think the startling deathbed confession she makes to him in a completely casual off-handed manner is reason enough. It pretty much sums up her complete self-absorption.

Like life Igby Goes Down is filled with flawed humans trying to connect with each other in an indifferent world. My only real complaint is that the necessary revelatory scene at the end is not dramatic enough. Sure Igby finally learns to forgive his mother and to tentatively begin an adult relationship with his brother. But hey this is a movie not a documentary, so a bit more tension and fireworks would have been welcome. As is Igby Goes Down is a solid three star movie. 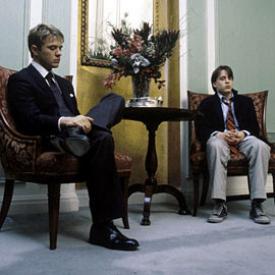 Ryan Phillippe and Kieran Culkin in Igby Goes Down.

Igby Goes Down is an interesting study of the confused male adolescent. Igby is no longer a boy, but not yet a man. Raised by a pill popping mother and two different fathers. One father, Jason Slocum, ends up in a mental facility and the other is a philanderer whom is only good for money.

Early on, Jason takes his sons, Oliver and Igby, to see Holiday, starring Cary Grant and Katharine Hepburn. In Holiday, Grant plays a man who wants to avoid responsibility. Instead of taking a job he wants to take an extended vacation. That is Jason's current state of mind and becomes Igby's.

Igby is an exaggeration of teen angst. He is half smart-ass and half frightened child, not knowing where he belongs in life. He mouths off to a Priest and a Shrink, but is scared to deal with his own family. He runs away from them every chance he gets.

Igby's big enigma is his father, Jason. As a child he watched him go literally insane. His father withdrew from life and it's responsibilities. Igby comes from wealth and could have easily gone the route of his older brother and gone to college and made a financially successful life. Igby is lost in his own cynical world. He does not want to end up like his father. There is a brief moment at the end of the movie where Igby visits Jason and gives the nearly incoherent father a kiss on the forehead. It is Igby's way of telling him he understands. It is Igby's first step to maturity.

This movie is an extremely pro father movie. If Igby had a father whom he was close to and was stable, he would not have had these problems. Scott compared Igby to Holden Caulfield from 'Catcher In The Rye'. I agree and would also like to draw a comparison to Jimmy Stark from Rebel Without A Cause. Both Igby and Jimmy suffer from the lack of a strong father influence. Thus they go out into the world thinking they know it all and of course find themselves well in over their heads.

As an adult I just want to tell these characters to just grow up and get over it. Their problems are of course adolescent and if they would just learn to shoulder some responsibility, aka growing up, they would not have as many problems as they imagine. So often films say they are a coming of age movie. Too often it just mean that someone in the movie will lose their virginity. Igby Goes Down is a truly, however dark, coming of age movie.