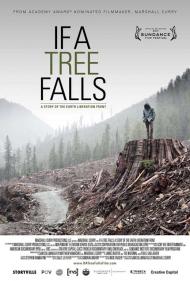 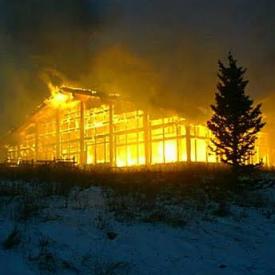 A large fire helps the environment by......?

If a Tree Falls: A Story of the Earth Liberation Front is the story of  Daniel McGowan, an ELF member who faced a life long prison sentence for arsons at timber companies in Oregon.  Although it tends to side with McGowan, making him as understandable as possible, this documentary examines the issue from many perspectives.

McGowan, the son of a New York policeman, went to college, got a job at a large corporation and then met a woman who introduced him to environmental activists.  He quickly ditched the job and went to Oregon, where a large group of tree huggers apparently are, due to the large logging industry.  McGowan talks about what a great time he had, experiencing nature for the first time, frolicking in the woods, go skinny dipping...etc.  Clearly, a life of play is more exciting than putting on a tie and going to an office.

In Oregon, he meets a group that decide to up their protests with action.  They burn down some isolated ranger stations and some businesses.  They destroy some SUVs, and burn down the offices of a family owned lumber mill.  They paint "ELF" on the side of walls to let the media know who was responsible.

We meet some of McGowan's cohorts and they all speak with pride of their actions against capitalism.  They feel offended when they are referred to as "Terrorists," stating that it is an inaccurate description, as they have never killed anyone in their fires, which according to this film is true.  It becomes a debate in the movie.

Of course they are terrorists as they try to terrorize someone else into doing what they want them to.  A terrorist can be someone who wants others out of the Middle East or somoene who wants others to stop deforestation.  If a Taliban member ignites a bomb but no on is hurt, is he still a terrorist?  Of course, just as an arsonist who never physically hurt someone is.

Another misnomer is when an activist says that the environmental movement contains people from all walks of life.  Yet, everyone shown here is either a middle class white twenty something or a middle aged white hippy.   One educated sounding young woman says that. "Consumer America is destroying the world."  Yet she is wearing clothes.  Someone had to buy those clothes or at least buy the material to make them.  Therefore she thinks she is helping to destroy the world?

McGowan is a hypocrite, as most extremists are.  He is very much an anti-capitalist, yet when he gets house arrest, his wealthy sister lets him stay in her nice New York apartment, which has wood molding, wood picture frames and wood cabinets.  Where does this dumb ass think those things came from.  An early scene shows him washing out plastic food storage bags for reuse, yet he sits at his computer on a plastic chair that will one day be in a landfill.  How much pollutant did those fires put into the atmosphere?  He wants to tell businesses what to do, yet he marries an overweight smoker?

A mill manager say that they do not just cut down trees and leave a mess.  The film then shows acres of destroyed trees that looks like a mess.  We hear a mill owner talk about planting more trees and hear of his loss by the fire.  We see innocent shop owners pissed off when idiot WTO protestors vandalized businesses in Seattle.  We hear from the police who searched for ELF members.  We see police pepper spray protestors who refuse to move.

These environmentalists want to save a tree by endangering lives, and yes they endangered lives, even though they will not admit it.  How many hours were spent putting out the fires they started?  How many hours were spent on what a detective in the film called "The largest domestic terrorist investigation."  What real emergencies did these morons distract those public servants from?

The end of the film tells us what happened to McGowan legally.  Whether you agree or disagree with his sentence will likely be based on your political leaning.  You may see McGowan as a hero or you may see him as a lazy moron.  Watch If a Tree Falls: A Story of the Earth Liberation Front and decide.  On second thought, don't bother.  Like me, your opinion is probably already made up based on what you already know.  This film will likely not change your view.