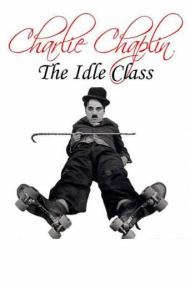 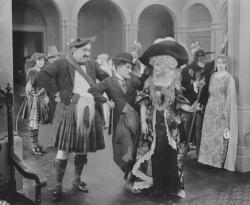 The Idle Class was made during a transitional phase in Charlie Chaplin's career. He had just made his first feature length film, The Kid, which had been distributed through the newly formed United Artists. It was met with universal acclaim but Chaplin still owed a few pictures to First National and they refused to let him buy out his contract. The Idle Class runs about 35 minutes, so while it's not a full grown feature, it's longer than your average two-reeler. It presents Chaplin in a simple tale that wants only to be funny. And boy does it succeed. It certainly ranks among Chaplin's funniest films.

It begins with the arrival of a train to a summer golf resort. First we see all the swells getting off the train in their fancy clothes, the men carrying golf clubs. Then the Little Tramp emerges from the luggage compartment below the train. He steps out, stretches his arms and then reaches back inside the train for his own ratty looking set of clubs. The Little Tramp is on vacation.

The first half of the story takes place on the golf course, the second half occurs that evening at a costume party. The only real plot element is the fact that Chaplin plays two roles. In addition to the Little Tramp he also plays a rich drunk who just happens to look exactly like the Little Tramp. Chaplin gets around the technical difficulty of playing two characters by keeping them apart for most of the movie. In their only scene together the rich drunk is conveniently wearing a suit of armor that completely covers his face. Obviously that's not Chaplin inside it.

There are several hilarious bits including what I think was his single most sublimely brilliant sight gag ever. The rich drunk gets a note from his wife (the reliable Edna Purviance) telling him that until he stops drinking she will be occupying separate quarters. The man is standing in front of a table with a photograph of his wife on it. He picks up her picture and gazes forlornly at it. Then he turns his back to the camera and his shoulders begin to gently shake as if he's in tears. The shaking becomes more vigorous and just when you think this man is really falling apart, he turns around with a cocktail shaker in his hands!

Another hilarious bit happens at the costume party, where the Little Tramp is mistaken for the rich drunk, dressed in the costume of a tramp. His wife (dressed as Marie Antoinette of course) sees the Little Tramp but thinking he's her husband pats the seat next to where she is sitting. Intrigued, the Little Tramp sits down. The woman then tenderly takes the Little Tramp's hand in an affectionate gesture. She thinks she's making up with her sot of a spouse while Charlie thinks he's getting lucky.

Frequent Chaplin foil Mack Swain plays Edna Purviance's father. The Little Tramp causes him much grief out on the links. In one bit Chaplin steals Swain's golf balls but makes Swain think another man took them. Swain jumps on the poor guy and starts beating the crap out of him while the Little Tramp scurries nonchalantly away.

If you want to look for a social message about class in America you can certainly find one here, but for the most part Chaplin is content to simply create laughs. The meager plot is in some ways a throwback to his earlier work. Chaplin once said all he needed to make a picture was a girl, a policeman, and a park bench. The Idle Class is more sophisticated than that but it's still a very simple setup from which Chaplin mines comedy gold. And did I mention he also composed the score? 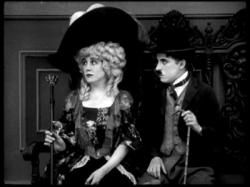 Edna Purviance and Charles Chaplin in The Idle Rich

Any film in which Charles Chaplin’s tramp character appeared was a movie with a social message about class in America. The Tramp always faced a world that looked down on him because of how he looked yet he always made due and looked on the sunny side of life, no matter how dire his situation. Calling the rich “idle” and placing The Tramp in a country club is an obvious social statement.

Chaplin goes even further this time by including the costume party. As Patrick wrote, the rich woman thinks the Tramp is her husband dressed as a bum, thus making the comment that perception is more relevant than reality. The attendees assume he is a rich man and ignore him, but had they known who he was, they would have evicted him immediately.

I am not sure if Chaplin’s quote about all he needed to make a picture was a girl, a policeman, and a park bench is a compliment to himself or an insult to his audience. The Idle Class is not that sophisticated and, as far as silent film comedies go, the meager plot is fairly run of the mill. Getting chased by a policeman is about as routine as silent comedies come.

I am not prepared to call this movie comedy gold but I enjoyed several bits. Patrick already mentioned the cocktail shaker scene and the flirtation with the rich man’s wife. Both are great but the image that has stayed the longest with me is when Chaplin, as the rich man, gets caught in the lobby without his pants on. He hides in a telephone booth until he grabs a newspaper, crouches down and walks with the open newspaper in front of him, giving the appearance of a little person walking while reading the paper. It is a simple idea but, as executed by Chaplin, is clever and hilarious.

I did not find this to be one of Chaplin’s best films but it is certainly more than worth a look. 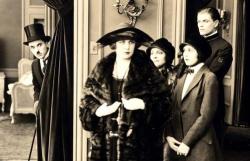 Years before he was known as The Tramp on film, Chaplin toured the vaudeville circuit in Europe and North America where his most famous character was a drunk very much like the one he plays here,  known as the"Inebriate Swell". It was this role that drew him to the attention of Mack Sennett and he played a drunk several times in his early shorts. This film thus allows Chaplin to play his two most famous characters at the same time.

I agree that the two best jokes in the film are the crying/cocktail shaking moment and the scene with Chaplin in the lobby without his pants. His walk behind the newspaper is inspired. Whether directly or indirectly, Mike Meyers was undoubtedly inspired by this scene in the opening to Austin Powers: The Spy Who Shagged Me, when he wanders around a hotel lobby without clothes, while his bits are conveniently hidden by passing objects, much as Chaplin's are here.

Although those and other scenes are quite funny, there is the impression that Chaplin was going through the motions with this one. His heart was already in features and the opportunity they created to generate real emotion. This contract fulfilling short amuses, but it's missing the most important aspect of a Tramp film and that is pathos. When the Tramp is at his best, he amuses and generates sympathy, but here he is simply a clown. He's no better or worse at the conclusion, but he does get the final word when he kicks Swain in the butt. This lack of emotion is what makes it feel less sophisticated; more of a throwback to his early work.

Along with Purviance and Swain there's another performer in the short who would prove important to Chaplin. Young Lita Grey, who was just 13 at the time, played the Maid. Just 3 years later, after a pregnancy scare, she and Chaplin were married in Mexico to avoid a scandal and possible jail time for Chaplin. Their marriage would only last 4 tumultuous years, but would produce two sons. It wasn't the first or the last time Chaplin would be sexually involved with a much younger woman.

Like Eric, I didn't find this to be one of Chaplin's best. It's an amusing enough 30 minutes, but it lacks the spark of his very best work.