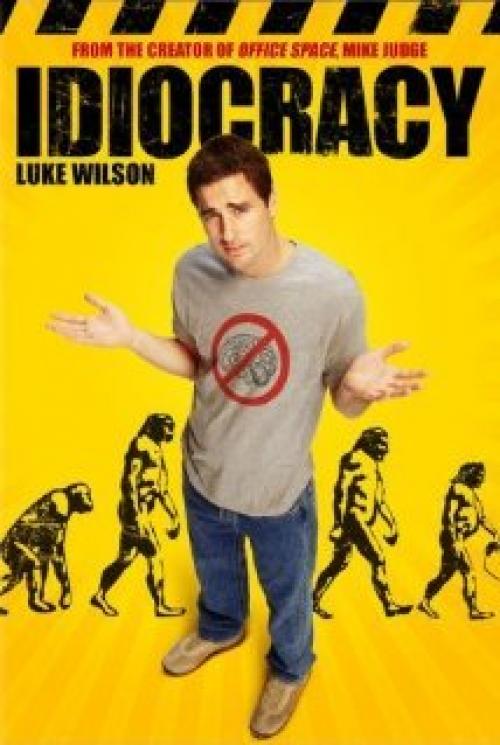 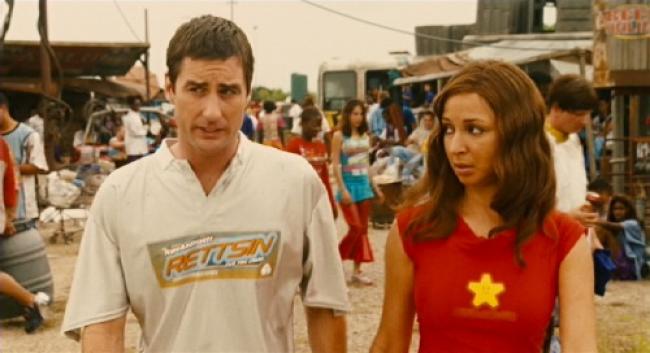 Idiocracy starts as a great biting satire on the devolving of the human race. It begins with a narration that includes the lines, “Evolution does not necessarily reward intelligence. With no natural predators to thin the herd, it began to simply reward those who reproduced the most, and left the intelligent to become an endangered species.” We are then shown two families. One is a professional couple who are waiting for financial stability before starting to have children. The other is a trashy family that keeps having children they do not take care of. Then their oldest son starts having kids while the dad meanwhile knocks up the neighbor woman. The narration later continues, “The years passed, mankind became stupider at a frightening rate. Some had high hopes the genetic engineering would correct this trend in evolution, but sadly the greatest minds and resources were focused on conquering hair loss and prolonging erections.”

The first part of the film is the best as it may inspire all kinds of conversation and debate. We then meet Joe, an army soldier who is put to sleep in a capsule and wakes up 500 years in the future, where everyone is very dumb. The satire is still there but a bit less politically charged. The narration states, “…the English language had deteriorated into a hybrid of hillbilly, valleygirl, inner-city slang and various grunts. Joe was able to understand them, but when he spoke in an ordinary voice he sounded pompous and faggy to them.” This is an obvious hit to ebonics and slang but is Mike Judge making fun of homosexuals or idiots who think sounding smart is something to be made fun of? Later, Joe gives a speech where he says, “…there was a time in this country, a long time ago, when reading wasn't just for fags and neither was writing.”

The satire does not work throughout all of the film. I mean, come on, the President of the United States here is treated like a pop star. Okay, so maybe that is not so far off and there is a prophetic moment when President Camacho gives a speech, “Shit. I know shit's bad right now, with all that starving bullshit, and the dust storms, and we are running out of french fries and burrito coverings. But I got a solution.” A South Carolina Representative shouts out, “That's what you said last time, dipshit!” In 2009, South Carolina Representative Joe Wilson interrupted President Barack Obama during a speech to the joint session of Congress by shouting "You lie!"

There are some laughs to be found. I loved the female reporter talking about Joe’s trial. However, most of the jokes are simply based on people being stupid. Whenever Joe, who has been accidentally renamed “Not Sure”, suggests they use water to grow crops, instead of an energy drink, someone always asks incredulously, “Water? Like out of the toilet?” The most popular television show is called “Oww My Balls” and the Oscar winning film is called, “Ass”.

Mike Judge had some good ideas here but Idiocracy never becomes the political satire it could have. He takes on corporate sponsorship and fast food but all of that is shallow. There should have been an underground organization of intelligent people who are scared to act smart as the dumb asses would call them “fags” and arrest them. Joe is average to dumb in his own time but in this future he is called the smartest man alive. A secret group of cowardly intellectuals could have put him in his place and added another layer of interest.

What I find interesting about Idiocracy is how the studio kept delaying its release date after early previews were received horribly by test audiences. Clearly the mainstream American public was smart enough to know they were being called stupid by Mike Judge. It also didn't help Twentieth Century Fox that the movie includes jabs at the corporate world, including Starbucks (where your latte now comes with a handjob) and Carl Jr.'s Restaurant where their slogan “Don't bother me. I'm eating.” is now “Fuck you! I'm eating!” And a large order is now called “extra big ass”. When they did finally release it, more than a year after it was ready for theaters, they didn't screen it for critics and released it in only 10 cities, skipping New York City.

Picture a stereotypical frat boy mentality, then dumb that down by at least a dozen times and you're close to the level of intelligence on display here. Eric already mentioned the Oscar winning movie called simply Ass. But what he didn't mention is that it consists entirely of a 90 minute closeup of a man's flabby ass while fart sounds are heard, for which it won Best Screenplay. I too found the television reporter in the courtroom scene funny, as well as the line Eric quoted by the South Carolina Representative. But the follow-up line by the second South Carolina Representative is even funnier. “Yeah, I got a solution, you're a dick! South Carolina, what's up!” Greeted with raucous cheering.

Set 500 years in the future, Judge is, of course, spoofing current society. Some of it is spot on and hilarious while at other times he just seems mean-spirited. There is a vague feeling of homophobia permeating the movie. Eric wrote about the flagrant use of the word “fag”, which wouldn't be so bad if it were counterbalanced by the presence of even a single gay character. Is Judge imagining that all gay people have been “Rehabilitated” or is he saying that gay people are too intelligent to exist in this future?

The cast is decent. Luke Wilson and Maya Rudolph are good as the two average test subjects. It's pretty clear what Judge thinks of military intelligence when you consider that he equates an army librarian with a prostitute. Dax Shepard plays stupid like he's been doing it all his life as Frito Pendejo (which translates as Fried Dickhead). Terry Crews is suitably over the top as the former pro-wrestler turned President of the United States. Justin Long makes an impression as the grammatically challenged doctor, “Why come you got no tattoo?”

I agree with Eric. The satire and humor in Idiocracy are hit or miss. But the “Time Masheen” amusement park ride with its hilariously inaccurate historical references ends the movie on a high note. It begins with the following narration, “We're gonna take you back, to the year 1939 when Charlie Chaplin and his nazi regime enslaved Europe and tried to take over the world...”