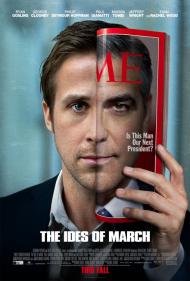 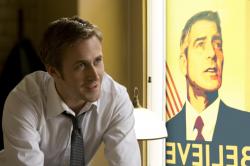 Ryan Gosling stars in The Ides of March

I saw an interview with George Clooney for The Ides of March, in which he stated that the Governor he plays is a Democrat, so as to not be biased against Republicans.  Clooney is an outspoken Liberal who has had public exchanges with well known quasi conservative Bill O'Reilly.  He has campaigned for Democrats.   The character he portrays is morally questionable, but it still allows Clooney every opportunity to spout his politics and many opportunities to slam Republicans.

Stephen Myers (Gosling) is a campaign manager helping to guide Governor Mike Morris through a tight Ohio primary.   Morris uses a campaign poster very reminiscent Obama's "HOPE" poster.  Only Morris's reads "BELIEVE."  Myers admits he has worked on many campaigns, but thinks Morris is someone he actually trusts and believes in.  Morris and his opponent are both trying to get the endorsement of a particular senator, who could bring a large amount of delegates with him.   The senator, in exchange, wants a job in the White House.  Politics!

Myers has a meeting with the opponent's campaign manager, creating issues of trust.  This puts his job on the line.  Meanwhile, he has learned of some scandalous information, he may or may not use to save his job or get a new one with the competition.

There lies the problem.  I really did not care.  We never learn much at all about Myers.  Beyond Goslings natural charm, we see little personality.  Everything he says in public has to be taken with a grain of salt as he understands very well that everything he says and everything he does can be perceived in different ways.   With the press often around he is very calculating.

What we do learn is what Clooney's politics are.  Through speeches Morris gives, we get to hear Clooney's opinion on oil, gay marriage, abortion, capital punishment, taxes etc...  As writer and director, he sets himself up to look good in those scenes, making his opinions seem very strong and sure.  Only one weakness is shown in Morris's liberal campaign.  Myers wants to bury a clip of Morris shown not being strong on defense.  "Hi. I am Neville Chamberlain, I want to be your commander in chief."  Myers mocks.  However, with so many negative comments being made about Republicans, and no one is ever shown giving an opposing opinion on any issues, The Ides of March is in fact, incredibly biased.

My favorite moment is when Morris and Myers are having a strategy meeting and Myers tells him to include in his speech a bill he wants to propose that when a person turns 18 they have to do two years of service, be it Military or Peace Corps.  Morris is unsure about it, but Myers explains that everyone too old to do it will support it and everyone about to be affected by it are too young to vote.   Lots of socialist countries do that now, why not The United States?

The Ides of March is not original on plot.  There is not much characterization.  We see some mildly interesting, but not at all shocking, back door dealing.  All in all, it works better as a pulpit for writer/director Clooney to put his Liberal opinions out there than it does as a good time at the movies. 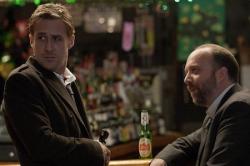 Ryan Gosling and Paul Giamatti in Ides of March.

Eric, I think you were distracted too much by Morris's political leanings. The story is really the jading of Gosling's character Myers. What's important, isn't what party Morris belongs to, but that at the beginning of the movie Myers believes that Morris is an ideal political candidate who is honorable and perfect in his eyes. It doesn't matter what his beliefs are, so long as he is represented as a clean and honorable politician. Naturally, since Clooney is so famously liberal, he chose to play Morris as a liberal, but you could just as easily have made his character a conservative and the only things you would have to change are the sound bites and speeches we hear Morris giving.

Where I agree with you Eric is that this is a movie where it's hard to care about any of the main characters. Gosling's Myers is charming and seems likable, but his behavior toward Molly is no better or honorable than is Morris's. Both of them are cold, calculating and unmoved by her fate. She is dismissed out of hand by both of them as a pawn in their political machinations. Giamatti's Duffy is one of the few honest characters in the film. He's as corrupt as anyone, but seems more cheerfully up front about it and doesn't pretend to hide behind scruples.

The performances by the small cast are universally excellent. Gosling continues his hot streak and Clooney is Central Casting's wet dream of a political nominee, while Hoffman and Giamatti are two of the finest character actors working today.

Clooney does a decent enough job behind the camera as well. He keeps the pace fast and stays out of the way of the story.

I also agree with you Eric that there's nothing too shocking here. I assume, as I believe most Americans do, that politics is filled with back door dealings far more duplicitious than the ones presented here. There's also a lack of tension with the movie lacking a big dramatic payoff. It ends with politics as usual. The big payoff is the confrontation between Gosling and Clooney in a kitchen, by which time I didn't really care for either one of them all that much, and the result of their confrontation boils down to whether or not Gosling's character will get to keep his job.

The production value and the performances all add up to a technically well done film, but one that I never felt emotionally connected to. 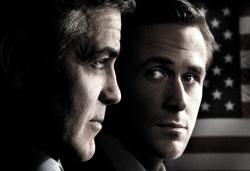 George Clooney and Ryan Gosling in The Ides of March.

Eric, if he had made this morally questionable Governor a Republican you would have complained even louder I am sure. Even though he shows that political corruption is not limited to either party you still find fault with him. Clearly George Clooney can’t win with you. And I must have missed all of the negative comments about Republicans that you complain of. Actual politics (whether liberal or conservative) play a very small and unimportant role in the story and Governor Morris is but a supporting player in the proceedings.

As Scott rightfully pointed out, the story arc concerns Gosling’s Myers having his eyes opened to the backstabbing and double-dealing that goes on behind the scenes of political campaigns. He begins the movie as a rather gullible sheep believing in his candidate’s every word and by the end he has cut his teeth and learned to swim with the sharks.

The only things I disagree with Scott on are the fact that Morris is represented as a clean and honorable politician (he is far from that as the ending clearly demonstrates). And the notion that Clooney chose to make him a liberal simply because he himself is liberal in real life. Instead I think it is because if he had made this selfish son-of-a-bitch a conservative the movie would have lost all credibility and everyone would have accused him of being biased. Of course some people, like Eric, will never give the man credit no matter what he does.

That said I think the movie gets off to a slow start. It isn’t until Myers gets fired, and we begin to see all the behind-the-scenes card shuffling that goes on, that the story really kicks into high gear. Philip Seymour Hoffman and Paul Giamatti (two of the least attractive men working in film today) school Gosling on the art of back room dealing.

If anyone has a right to complain about the movie’s characterizations I think it is women. They are present merely to serve as incredibly naïve victims like the interns working for Morris’ campaign. The only other women in the movie are the ball-breaking journalist played by Marisa Tomei and the Governor’s supportive wife leaning her head on her husband’s shoulder in her one brief scene.

The Ides of March is set in the world of politics but it isn’t a politically themed movie. It is the story of one man’s journey from wide-eyed innocent dupe of the system to a cynical master manipulator. Ryan Gosling gives an award worthy performance.