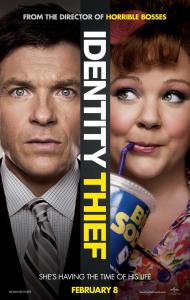 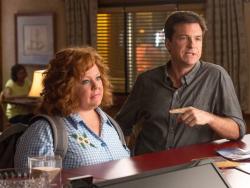 Last week I was pleasantly surprised by Hansel and Gretel: Witch Hunters. Despite being strictly a B-movie that was dumped in January, I still found it enjoyable. Identity Thief, on the other hand, was exactly what I expected from a comedy being released this time of year. It's unfunny-painfully so at times-and feels exactly like what it is, a warmed up rehash of better comedies that have been done before.

Remember Planes, Trains, and Automobiles? How about Midnight Run? If so, then you already know the plot of this film. If you don't remember those films then do yourself a favor and go and rent either of them instead of watching this movie. They're both examples of an odd couple on a cross country road trip, as Identity Thief is, but they're much, much funnier.

If you insist on knowing about this one, Jason Bateman stars as Sandy Patterson, a number cruncher in Denver whose identity is stolen by Diana (McCarthy) in Florida. When the local police say they can't do anything about it, Sandy decides to go and get her himself and trick her into coming back to Denver with him. He manages to find her and tells her that he just wants her to convince his boss that he's not a criminal and that he won't press charges if she comes back to Denver with him. She reluctantly agrees, mainly because she needs to get out of town because a couple of hitmen are looking to kill her.

Diana is an annoying loose cannon while Sandy is a straitlaced, tie wearing, accountant. Most of the humor is supposed to be derived from their clash of personalities. To be fair, they do manage to create a few laughs. Not many, but a few. Most of which are because of the talents of the two leads.

Unwisely, the script also tries to generate the occasional genuine emotion. We're supposed to feel sorry for Diana and we're supposed to believe that over the course of the journey that Sandy not only forgives Diana, but genuinely starts to care about her, despite the fact that she nearly destroyed his personal life and almost gets him killed on several occasions. The script is not nearly strong enough to sustain any kind of drama and it should have been left on the cutting room floor.

Removing the unworkable moments of drama would also have the added benefit of reducing the nearly 2 hour running time, which is way too long for this unfunny comedy. Diana is so annoying that I didn't want to spend a single second longer with her than I absolutely had to and yet this movie feels like it goes on and on and on.

Bateman normally makes a great straight man and McCarthy proved she can be funny in Bridesmaids. However, even the most talented of actors can't do much when the script just isn't funny, as is the case with this one. 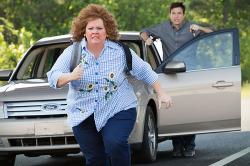 Sure, the set up of two people on a journey together, both literal and as a metaphor, has been done before. We can trace this kind of film all the way back to those Bob Hope/Bing Crosby Road movies. It is a simple way to create conflict as the two parties involved must rely on each other at different times, no matter how well the people in question get along.

Whereas Scott found Melissa McCarthy annoying, I found her often hilarious. After getting hit by a car she acts like it is not a big deal, as if it happens to her all the time. Whether singing in the car or yelling at Jason Bateman, "What are you, a Kenyan?" I enjoyed her antics. The one thing I did not buy was that she did not have any friends. McCarthy plays Diana so large and full of life that she would have been surrounded by people. Most of us do not live as outrageously as she does but still have some friends.

Bateman is definitely playing second fiddle to McCarthy, and his character is likewise not completely believable. The film opens with Sandy, a college educated professional, giving a stranger his social security number over the phone. Anyone that stupid almost deserves to have their identity stolen. As Scott wrote, it is the clash of the two personalities that the film is intended to derive its humor from. When ordering at a diner, Diana purposely goes over budget, causing Sandy to say in front of the waitress, "I asked you to eat less food." The waitress assumes Sandy is commenting on her weight and barks at him,"What is wrong with you?"

The fact that they begin to actually like each other is a pill you must take with a large glass of water. Diana is obviously looking to connect with someone, so we see the time she spends with Sandy as the beginning of a personal connection for her. Sandy, on the other hand, is not so quick to like Diana, but he eventually does. He hears her sad story and she takes care of him after getting bit by the snake.

The writing often felt lazy. When Sandy and Diana are without a car or any money, why did he not just phone his wife for help? Instead, he commits a crime with Diana. The writers painted the characters in shades of gray. Sandy is a good guy, but under the right circumstances, may be tempted to commit a crime. Diana breaks the law, but she really just wants a friend.

As long as you can buy into the arrangement and the characters change of heart, Identity Thief may win you over. McCarthy is a ball of energy, willing to do anything for a laugh. The scenes in the hotels come to mind. Accept that the characters do not act as real people would and you will likely enjoy this film.