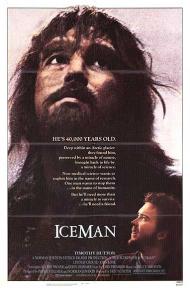 For a brief period in the 1980s caveman movies were popular. Quest for Fire (1981), Iceman (1984), and Clan of the Cave Bear (1986) were to this genre what the revisionist western of the late 60s - early 70s had been to that one. Namely an attempt at greater historical accuracy and closer adherence to scientific fact. Compared to Raquel Welch in a fur bikini, or Ringo Starr doing pratfalls, these movies are practically documentaries. Like Tarzan going to the big city, Caveman is the only one of them to be set in the modern day. This angle gives the story a bigger emotional punch and allows for a bit of a philosophical statement on humanity.

It begins with the discovery of a body frozen in ice in the arctic. It turns out to be an early human male (Lone), approximately 40,000 years old. The scientists are able to revive him (it sounds far-fetched but it is handled in a fairly realistic manner) and they build a controlled environment in which they can study him, like an animal in a zoo. It doesn't take long for the caveman to discover certain modern devices in his cage, and like Adam realizing he is naked, it leads to the caveman's loss of innocence.

One of the scientists (the hero), a Dr. Stanley Shepard (Hutton), befriends the caveman. They exchange names. The caveman's odd sounding name is interpreted as “Charlie” by Shepard, who begins to learn more and more about Charlie's past life. He eventually figures out that Charlie most likely had a wife and children, and that he was on some sort of religious mission to save his people, from presumably a sudden ice-age, when he had been instantly frozen alive in a sheet of ice.

The connection between Shepard and Charlie is at the heart of the movie. Shepard alone sees the humanity in the Neanderthal. The best scene is when Shepard begins singing Neil Young's “Heart of Gold” and Charlie joins in, singing his own tune in his own unique fashion, proving once again the oft-stated adage that music is a truly universal language.

The cast is terrific, with John Lone being the standout in a difficult role. Although he communicates with a very rudimentary language composed of what sound like grunts, he manages to convey so much emotion as the primitive early man, Charlie. He is alternately fierce and frightened. His confusion at the unimaginable circumstances he faces is palpable. You will definitely feel for this guy.

I somehow missed this movie when it first came out thirty years ago. I highly recommend it. It takes a rather fantastic plot concept and offers a realistic and surprisingly intelligent look at it. From beginning to end I was fascinated by this little forgotten gem of a movie. 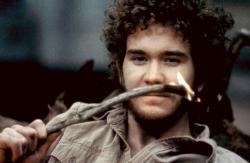 As the entire point and passion of this film comes from the relationship between a 40,000 year old Neanderthal and a young scientist, the first 25 minutes should have been only touched upon later in an abbreviated flashback. The movie should have begun with Charlie awakening in his environment. The audience would have seen things better from his perspective, making his first encounter with modern man all the more shocking.

As Patrick wrote, the friendship between Shephard and Charlie is at the emotional center of the movie. Everyone else wants to experiment on Charlie, leaving Shephard as his only possible savior. Shepard is to Charlie what Eliot is to E.T. Just as a boy connected to an alien, so does Shepard connect with someone almost as far removed, “I know Charlie. I know him.” Shephard desperately tells another scientist.

I also agree with Patrick that the best scene is when Shepard and Charlie sing a duet. They are just two buddies sitting around a campfire singing and playing with their bones. Who hasn’t been there?

The big question is, does Shephard really have Charlie’s best interest in mind? Is he really looking at Charlie realistically? When he escapes his cage and wanders the complex, we see just how alien Charlie truly is. Yes, Charlie is a human but only barely. What future does he have? He either spends the rest of his life miserable in captivity or freaked out in a world he does not comprehend. Fortunately, Charlie has his own plans and if he can convey them to Shephard, he may get to where he wants to go.

I was not as taken by this film as Patrick but enjoyed the philosophical question of the meaning of life. The scientists want to dissect Charlie and perhaps better mankind through their findings. Shephard sees Charlie through rose colored glasses. He wants him to be happy and healthy but is that actually possible? Ultimately we learn from Iceman that life, a true life, is about making your own decisions about your life and not someone else.