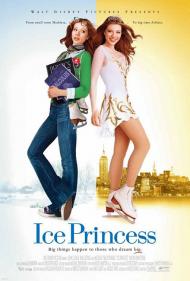 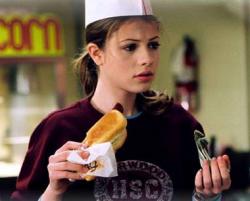 When I'm as far from being the target audience of a movie as it's possible to be and still enjoy it, then the makers of that movie must have done something right. This is the case with Disney's Ice Princess, which almost in spite of myself, I actually thoroughly enjoyed.

Like so many of Disney's movies and cartoons, this one deals with a teenage girl living with a single parent who goes in pursuit of her dream. This time the girl (Casey) is played by Michelle Trachtenberg (Buffy: The Vampire Slayer, Eurotrip) and her dream is Figure Skating. When the movie begins, she's a physics nerd who needs a science project to get a scholarship to Harvard. Since she already dabbles in ice-skating, she decides to base her project around the dynamics of skating. Soon though, she's caught up in the sport and armed with her raw talent and her mathematical formulas, she enters a tournament. The question of the movie then becomes, does she pursue her dream of skating, or does she go on to Harvard?

It's not the most original of concepts I know, but Trachtenberg is so likable in the lead role, that you can't help but root for her. She plays the pretty-ugly girl quite well (you know, she's nerdy and geeky until she lets her hair down and puts on the ice-skating outfit).

Joan Cusack and Kim Cattral are both good in supporting roles. Cusack plays Casey's mom, whose personality was formed in the liberal 1960s and hasn't changed since. She disapproves of her daughter's hobby as sexist and silly. Cattral is the former skater who now coaches and will do whatever it takes to win, no matter what.

Some of the dialogue is a touch melodramatic, like when Joan Cusack tells her daughter that, "You're giving up on our dream!" and Casey replies, "No mom, I'm giving up on your dream." Other lines seem to have an accidental double meaning, as when the guy Casey has a crush on says, "You can ride my Zamboni any time you want." Although since the movie is rated G, I might be reading things into that last line.

One small, nice touch added to this movie is the humanization of the popular girls. When the movie begins, they seem like the stereotypical snobs who always seem to populate these teen films, but as Casey gets to know them they actually soften up. Who knew that in a high school movie, people from the popular crowd could be nice?

This is a movie that will definitely be enjoyed most by its target audience of young girls, but it should be a relief to anyone who has to accompany their daughter or girlfriend to see it that it can be enjoyed by all. 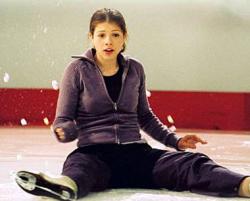 I enjoyed this movie, but not as much as my wife. As Scott wrote, this is definitely a girl's movie. A movie about two single parents who push their children to live the lives that they wished they had could easily be a guy movie. It just so happens to be about women.

Ice Princess is about finding your own way and not following the path your parents, (oh, I forgot this is a Disney movie) I mean "parent" wants you to. It is a very worn cliche but it is handled well here. Casey's dream to ice skate is hardly a negative thing so it doesn't really give her mom much to complain about. The two mothers have a scene where they yell at each other, but otherwise this movie is all simmer and no boil.

All of the characters are likable. Even the villainess popular girl and her win-at-all-cost mom become human and are pleasant by the end of the movie. Casey's mom, played by the great Joan Cusack, could have used some more screen time. Her liberal, feminist character could have easily been the butt of many jokes. The politically correct Disney missed some opportunities with her character.

Women will probably like this movie and some men may be able to sit through it without being completely bored. It's just too bad the writers could not have gotten more out of the characters. If they had, then this film may have been more than just some afterschool special.