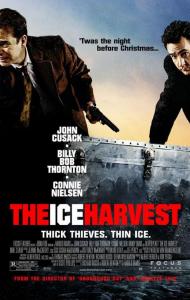 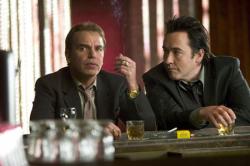 Billy Bob Thornton and John Cusack in The Ice Harvest.

The Ice Harvest, directed by Harold Ramis, is being advertised as more of a comedy than it actually is. It's not that it isn't funny, but to judge by the previews, you'd think it was filled with nothing but flat out humor. It's actually more of a heist movie with some funny moments thrown on top of it.

On Christmas Eve in Wichita Falls, Kansas, mob lawyer Charlie Arglist (Cusack) and his associate, Vic (Thornton), manage to embezzle over $2 million from the boss in a manner that is never really detailed. That same evening an ice storm hits Wichita and the two of them are forced to wait for the storm to subside before they can make their getaway. As they wait it out, a mob hitman is seen in town asking about them. Charlie spends the time trying to discreetly say his goodbyes without tipping anyone off that he's leaving, while Vic remains disturbingly calm. Shortly, Charlie begins to suspect that Vic's plan is to knock him off so that he can keep the money for himself, but that's just the tip of the iceberg when it comes to the double-crossing that's going to go on over the course of this one night.

While Cusack is the star, it is Thornton and Oliver Platt, as an old friend of Charlie's who just happens to be married to Charlie's ex-wife, who steal the movie. Thornton is terrific as the shady gangster partner. Not since Jack Nicholson has anyone used swearing in movies to such good effect as Thornton does. There's just something innately hilarious in the way he does it. And the combination of Christmas and anti-social behavior from Thornton, as he proved in Bad Santa, is a potent combination.

Platt, whom Charlie bumps into as he mopes about the town trying to come to terms with the implications of what he's done, steals every scene in which he appears. Whenever he's on the screen, the movie actually is the comedy that it's advertising itself as being. He plays a terrific drunk.

The movie comes to a head when the mob boss himself comes to town to take care of his two wayward employees and with his arrival the betrayals and the backstabbing reach a new level. And as Christmas morning dawns the body count is quite high.

The problem with The Ice Harvest is that as not quite a comedy, the tension underplays the humor and as not a full thriller, the humor undercuts the suspense. A fuller commitment to either genre would have improved a story, that while entertaining, eventually feels unsatisfying. 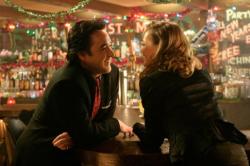 John Cusack and Connie Nielsen in The Ice Harvest.

The Ice Harvest does commit to a film genre. It is definitely film noir. The most obvious moments are whenever Connie Neilsen is on the screen. Her femme fatale is reminiscent of Kathleen Turner from Body Heat or Lauren Bacall from any number of 1940's films. Ramis uses shadows and sets the whole thing up like a traditional film noir mystery.

Platt and Thornton do have the showiest parts. Plat's interruption of Christmas Eve dinner is both funny and emotional. Thornton has the best line in the movie. "He said, 'Tell me where the money is or I'll shoot her.' I think he was counting on a level of commitment that just wasn't there." Although you have to see the movie to appreciate it.

Whereas Thornton and Platt are there for laughs, Cusack and Neilsen keep the movie grounded. Neilsen slinks around the movie like a woman with more brains than she leads on. Cusack is harder to read. You never know what his character is up to and how far he will or will not go.

The Ice Harvest is a throw back to old style film making. The dialogue is good and everyone is suspect. Ramis even goes so far to appear film noir that some scenes have such little color in them that they almost seem black and white. 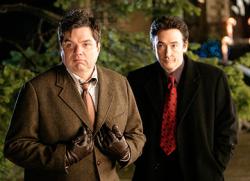 Oliver Platt and John Cusack in The Ice Harvest.

I enjoyed this neo-noir, heist caper for its dark humor, unexpected situations and interesting characters. I had no problem with The Ice Harvest's mix of tension and humor. I agree with Eric that Connie Nielsen makes a great femme fatale. Her last line, “To the victor go the spoils.” is delivered with just the right amount of deadly seduction on her lips.

I also agree with Eric about Charlie Arglist (his last name translates to "guile" or "deceitfulness" in German) as played by John Cusack. Of all the characters caught up in this escalating Christmas Eve crime spree he seems the nicest and least dangerous. Although the events of the evening eventually suggest otherwise. But even at the end he proves himself a decent guy. He is willing to stop to help Sidney out when he comes across him out of gas along a deserted road.

My brothers mentioned the comic aspects of the movie but they failed to mention one of the funniest characters. Ned Bellamy gets some of the best lines as Sidney, like, “My mother's always telling me I gotta control my anger, channel my energy into something more positive. Makes me want to slap her silly.” Or when he is arguing on his phone, “No no no. Shut-up you toothless old whore!” (a fight breaks out) “Ah shit, Mom I gotta go.”

Eric mentioned the best line though, spoken by Thornton in reference to his wife Gladys, played by Lindsay Porter. His smug delivery is priceless. Like Charlie's surname her first name is also symbolic. Gladys translates as “Slippery Ice” in Dutch (glad ijs), which is what these characters are all walking on, both literally and figuratively. Thornton gets another of my favorite lines when he and Cusack are in the car with Roy, the mob guy, in a trunk in the backseat. Roy won't shut up so Vic says, “Pay no attention to the man in the trunk.” This being Kansas and all a Wizard of Oz reference is apropos.

The Ice Harvest is fast-paced neo-noir with plenty of cruel jokes, gory action and constant backstabbing.