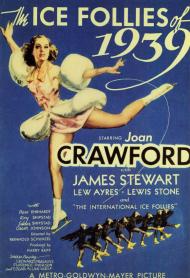 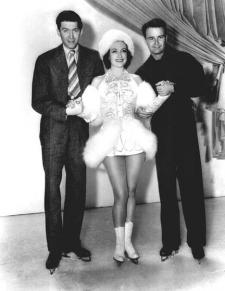 Have you ever noticed that often when a movie becomes successful other movies suddenly pop up with similar plots or concepts? This is hardly a recent idea. The Ice Follies of 1939 is a perfect example of how Hollywood can lack in originality and steal ideas from other films.

One of the biggest stars in the late 1930's was former Olympic skater Sonja Henie. Twentieth Century Fox put her in a series of successful films that all got her on some ice at some point. MGM, vying to get in on the skating novelty, threw some serious money into The Ice Follies of 1939.

Starring bankable stars Stewart and Crawford, it tells the story of a married couple, Larry and Mary, who cannot seem to make it big as skaters. However, Mary soon gets an acting contract and becomes an overnight movie star. Larry feels left out, especially when his wife comes home stinking drunk after a night out in Hollywood without Larry. He goes to New York, leaving Mary to make another movie. There, he produces an ice show that becomes a huge hit.

Will Mary and Larry save their marriage? If you can stay awake through the extended ice skating sequences you will find out. The whole point of this movie is to capitalize on the fascination the public had with ice skating. The marriage drama disappears for twenty minutes at a time as we see the ice show. Neither star really skates.

Not only did MGM put two big stars in this movie, they also went with a gimmick that The Wizard of Oz would make better use of the same year. The movie is in black and white until the final sequence. Unannounced, the movie suddenly turns color. It really adds nothing to the movie. Joan Crawford looks just as ugly in color as she does in black and white, but she does have some nice legs under that blue dress.

The one and only scene I like is when Crawford comes home drunk and sits on Stewart’s lap. He is fuming mad while she babbles on about how successful she is and how they will have everything they want now that she is a famous movie star. He has very few lines here but you can see the frustration on his face. They were both too good for this movie. It should have been sent to Twentieth Century Fox to star a girl who could not act all that well but knew how to skate. 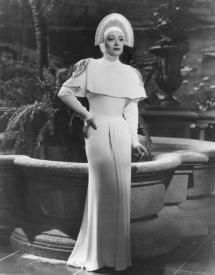 Joan Crawford wears an Adrian original in Ice Follies of 1939.

Eric, were you paying close attention when you watched this movie? First of all at the beginning of the picture Larry and Mary are a mildly successful ice-skating team but they aren’t married. It is only after they wed that Mary decides to try her hand at acting since she was never much of a skater (which becomes a running gag later in the movie) and Larry is down on his luck and having a hard time supporting them. And Larry doesn’t move to New York because he feels left out, but rather because he doesn’t want to be one of those men that live off their wealthy wives.

Stewart gets the best line in the movie when he tells her, “Stars are a million miles apart; they never touch. They live away from each other, cold and lonely - like we'll have to do.” There is a point where he says his wife’s name (Mary!) with the exact same passionate inflection he would use in It’s a Wonderful Life in the scene where he proposes to Donna Reed.

Eric, Joan Crawford’s looks may not be to your liking but she was hardly ugly. She had an incredibly striking face made more interesting by her highly stylized make-up. The scene where she gets hired by Monarch Studios would have been tongue-in-cheek to audiences of 1939. I mean here is THE Joan Crawford, a movie star for over a decade, getting hired as a contract player. Lewis Stone sizes her up and tells her she has potential as a movie star.

In a blatant studio plug every movie star mentioned in the entire picture was under contract to MGM, including Clark Gable, Myrna Loy, Spencer Tracy and Robert Taylor.

I agree that the scene where Crawford comes home drunk and sits on Stewart’s lap is a good scene. Eric appreciated the expressions on Stewart’s face but I thought Crawford was a hoot acting drunk. She also has a good moment when she asks her husband and his friend to help her rehearse for her first movie at the breakfast table.

My favorite scene in the entire movie is the one where Larry goes to the Broadway producer’s office to get backing for his ice-skating follies. Lionel Stander (who would become famous as Max on televisions’ Hart to Hart in the 1980s) is great as the cigar chomping Mort.

The ice-skating scenes are moderately amusing and the big finale in color adds a bit of spice to the picture. 1939 was the year Technicolor finally “arrived” in Hollywood. Sure there had been successful color movies before then like The Adventures of Robin Hood, Nothing Sacred, Snow White and the Seven Dwarfs and the original A Star is Born, but it was the one two punch of The Wizard of Oz and Gone With the Wind that really put color movies on the map for good. After this year Technicolor would no longer be treated as a novelty.

The Ice Follies of 1939 is a skating movie supported by a very slight story that is beneath the talents of its two iconic (non-skating) stars. 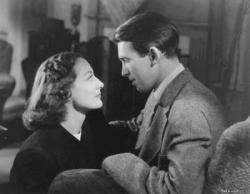 Joan Crawford and a youthful looking Jimmy Stewart in Ice Follies of 1939.

So apparently not every movie released in 1939, generally accepted as the pinnacle year of the Golden Age of Hollywood, was a winner. As Eric pointed out, this was obviously an attempt by MGM to cash in on the success of 20th Century Fox's Sonja Henie movies. It's just too bad that despite a big budget, a couple of big name stars and with the power of Leo behind it, it still feels like such a half-assed attempt.

One of the biggest problems is simply that the stars are never shown skating. There's a running joke that Crawford is a lousy skater, but Stewart is supposed to be quite good. However, once he gets the follies up and running, we only ever see him directing and producing, with no explanation as to why he's stopped skating.

I disagree that Crawford was ugly. However, she does look much older than her 34 years. Stewart was only 3 years younger than her, but at times the age difference looks closer to 10. Near the end of the movie there's a joke where Crawford's character complains that her closeup was cut, but perhaps this was done intentionally to prevent audiences seeing her so closeup in her first color appearance. Patrick, you say that to audiences of the period it must have been a laugh to see such a star hired as a contract player, but the real irony is that no studio would have hired an aspiring actress who looked as old as she did for anything other than character work. I do agree though, that she does good work with mediocre material, and I too would single out the drunk scene as worth mentioning.

Although I'm not a big fan of figure skating, the final color number does look good. The ice was covered by an inch of water and this created the mirror effect that looks so impressive on screen. However, the finale is lacking that one impressive stunt that it really needed to go out with a bang. Anne H. Leitch, the lead female skater in these scenes, actually just passed away in March of 2011 at the grand old age of 94.

This is the kind of movie that could only be produced under the studio system. It's hard to imagine any other way two such big name stars would ever agree to appear in such a dubious production.

By definition, follies can mean either a theatrical revue or  more than one foolish act. It's difficult to decide which definition is more apt in regards to this movie.