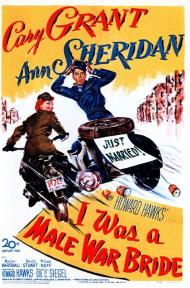 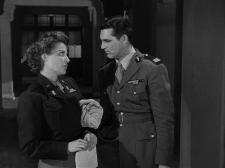 I Was a Male War Bride is a funny look at relationships as well as a great battle of the sexes.

I Was a Male War Bride is a funny look at relationships as well as a great battle of the sexes. This is a zany srewball comedy with some amazing dialogue. As if that isn't enough, it also stars the greatest screen comic straight man, Cary Grant.

Grant plays a French officer, Henri, stationed in Germany right after World War II. He and an American officer, Catherine (Ann Sheridan), fall in love as they bicker and fight their way around the European countryside. While lost, Catherine has Henri climb a signpost to see if the sign will give them directions. The sign reads 'Wet Paint'.

Another scene has Henri straddling a rising railroad crossing gate after he tried to retreave something Catherine had dropped. They fight so much that in the scene where Catherine is expressing her love for Henri, it comes out 'You're stubborn, you don't know anything, and you're a fat head'.

Once they realize that all that arguing was just sexual tension, Henri and Catherine decide to get married. Both are in foreign countries and in different armies. The red-tape and paperwork is enormous. To make matters worse all of the paperwork is geared towards a male soldier marrying a female civilian. In one scene Henri is answering questions from an embarrassed American GI. Reading from a form the uncomfortable GI stutters 'Uh, Any female trouble?' to which Henri responds. 'All kinds.'

I found the dialogue in this movie to be some of the best I have ever heard. Two women are discussing Catherine's relationship with Henri. One girl says something about how she thinks Henri beats her. 'I've seen the marks.' She says. The other girl lustfully counters that 'He can beat me any time. I'll bring the stick.'

Director Howard Hawks must have liked sexually controlling women. It's a theme he uses in several of his movies. Bringing Up Baby, I Was A Male War Bride and Gentlemen Prefer Blondes all have sexually dominating women and subordinate men. Each film also has at least one scene where the male lead ends up dressed in some female garb. Most notably in I Was A Male War Bride, where Grant ends up with a horse-hair wig on as his wife sneaks him aboard ship. 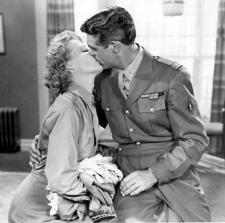 Cary Grant and Ann Sheridan in I Was a Male War Bride.

Screwball comedies need just the right amount of exaggerated reality to be truly funny. I Was a Male War Bride is a good example of this. The red-tape and ensuing humiliations that Henri endures are exaggerated but not to the point of becoming completely implausible. His frustrations are real and therefore funny. How many times does he spit out the phrase, 'I am an alien spouse of female military personnel on route to the United States under public law 271 of the Congress'? I like the fact that they must have three wedding ceremony's too, one in German, one in French and one in English. Howard Hawks knew how to add funny details like this to the already ridiculous situations at hand.

This movie always reminds me of my parents. Don't get me wrong. They are nothing like Cary Grant and Ann Sheridan. But as Eric said, Henri and Catherine fall in love as they travel the European countryside. This movie was filmed on location in Germany. There are many beautiful shots of quaint villages, and picturesque dirt roads leading over rolling hillsides. My parents lived in Germany after they were married in the early sixties and I remember, as a kid, seeing photographs of them in places that look remarkably similar to places in this movie. This, naturally, adds a certain level of nostalgia to the movie for me.

Although Eric is right that Catherine is a sexually dominant woman, Male War Bride reflects the male oriented society of the times. One blatant example is when an announcement is made to a roomful of brides waiting to embark to America. They are informed all about the latest fashion in the United States, as if hairstyle and hemline length could be the only possible concerns for a new bride.

I am a firm believer, however, that movies should not be penalized for accurately portraying social or political views that have, over time, become unpopular. In fact, I think it a good thing to have these tangent reminders of the progresses that have been made. Also there is something very refreshing about movies that were made in the era before political correctness became the law of the land. If you don't believe me watch I Was a Male War Bride and decide for yourself. 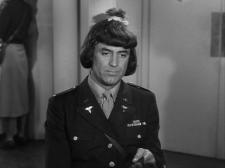 Cary Grant must have made a bad movie at some point in his career, but I have never seen it.

In some ways this movie is both dated and ahead of its time. The scene you mentioned Patrick about the announcement to the brides is a tad sexist, but Catherine's character is a very modern women. I found this apparent contradiction simply added to the charm of the movie.

You know I'm sure that Cary Grant must have made a bad movie at some point in his career, but I've yet to see it. He always manages to be charming and comic at the same time, no matter what the film. I'm trying to think of another actor who had that combination and I can't. In Hollywood you can be a sex symbol or you can be funny. An actor like Grant who can do both is rare indeed.

In one way Grant reminded me of Sean Connery in this part. Connery is famous for never changing his accent no matter what the nationality of his character. Here Grant is supposed to be French and yet he just uses his normal speaking voice and mannerisms. If you weren't told that he was French you'd have no way of knowing it. It has absolutely no bearing on the enjoyment of the story, but I found it funny.

While the parts where Grant battles with the Army's paperwork is funny, I enjoyed the first half best with he and Sheridan battling it out across Germany. They have a good chemistry together and although comic sexual tension has literally been done thousands of times before and since, they still bring a freshness to it. Their ride on the motorcycle, the night in the hotel when the door knob falls off and Grant brilliantly tries to fall asleep in the chair are some of the best and funniest moments in the movie.

The scene at the end where he is forced to dress up as a woman to get on board the ship is probably the scene this movie is most famous for and yet it's one of the weakest. It's obvious and a bit of a cheap laugh, but it also leads to the end where Grant throws the key to the stateroom out of the window when he finally gets his bride alone for the first time since their weddings. It's a great ending to a great movie.