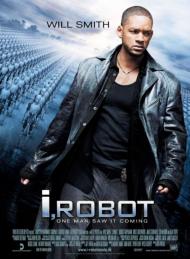 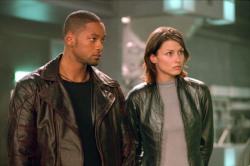 Will Smith and Bridget Moynahan in I, Robot.

I, Robot is Will Smith's seventh movie to gross more than 100 million dollars in the U.S. and the summer of 2004 is the sixth summer since 1996 to see a Smith movie break the blockbuster ceiling. Enemy of the State remains his biggest grossing non-summer release. This is Will Smith in wisecracking action hero mode and it is his most purely enjoyable movie since the first Men in Black.

The year is 2035 and Chicago is the world headquarters for U.S. Robotics the leading manufacturer of highly advanced robots that have replaced humans in nearly all manual labor and are a commonplace 'appliance' serving human needs. On the eve of the release of a new and more human-like model of robot, Detective Del Spooner (Smith) investigates a suspicious suicide by the creator of the robots at the company headquarters. He meets an attractive woman (Moynahan) who works as a robot 'shrink' and together with the help of a robot named Sonny they get caught up in stopping a robot revolution.

Sonny continues the evolution of the CGI character. He's part C-3PO, part Hal 9000. He's a robot who dreams and has human feelings. Ironically, Sonny conveys more real emotion than Speilberg was able to do in A.I. with a real actor playing a robot. He also provides Smith with a sidekick.

I,Robot is a family friendly PG-13. There is one quick shot of Smith taking a shower early in the movie. He shows off his buffed body but all you see is his butt profile. There isn't any real offensive language and the violence is mostly directed at robots. The look and feel of the movie is like a comic book. But a well-written one. Smith tosses off oneliners while chasing and getting chased all around the futuristic Windy City.

I, Robot starts a bit shaky but once the central mystery starts unraveling and the characters gel it turns into a good time at the movies with a less predictable ending than you might guess. 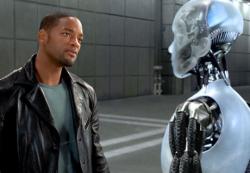 Will Smith in I, Robot.

The writing is weakest aspect of the film. In one scene Smith looks down at a cat that seems to have taken a liking to him and says, "This won't work. You're a cat. I am black." I wonder if he adlibbed that line or did someone actually write it down?

The action scenes and special effects are good but if you strip away the blood and danger you find a Scooby Doo episode. In one scene Smith enters a house by walking past an ominous looking piece of wrecking equipment. Of course it activates shortly there after and attacks Smith. How many times have Shaggy and Scooby walked past a suit of armor just to have it come alive?

In another scene Smith does battle with dozens of robots in a tunnel. He tells the police chief about it but all of the robots bodies have been cleared away via secret passageways so there is no evidence of his fight. How many times has Shaggy and Scooby told Fred or Velma about something only to have it disappear into a secret passage before they can point it out?

All of the special effects and action sequences in the world can't save an inadequately written movie. 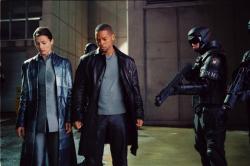 Bridget Moynahan and Will Smith in I, Robot.

I, Robot is a total fluff piece. It hints at deeper topics, but never pursues them. Smith's character has a prejudice against robots, but instead of using this a metaphor for prejudice in the real world, it just devolves into the "a robot did me wrong once scenario". I was reminded of Who Framed Roger Rabbit? when Bob Hoskins' character said, "A toon killed my brother once." And obviously, a world with robots to do our every whim would alter society dramatically, but that avenue of thought is also swept under the rug.

The whole movie has a flippant attitude that kept me from taking any of it seriously. Smith is in full-on smart-ass mode and this keeps the movie too light. I never felt any tension or danger in the movie. It felt like a character from a comedy had wandered onto the wrong set and ended up in a drama.

And with a weak central character, the movie falls apart, since this movie is only about Smith. Sonny, who could have been an interesting character, and in fact was for many years on Star Trek: The Next Generation (only there they called him Data), is given limited screen time, maybe because whenever he's onscreen he upstages Smith. And Moynahan has as thankless a supporting role as a typical Doctor Who companion.

I can be as big a fan of big budget sci-fi blockbusters as the next person, but if you're going to do one based on the writings of Isaac Asimov, it should be treated with a little more respect than the writers of this movie gave it. Otherwise, why bother to adapt his writing at all?