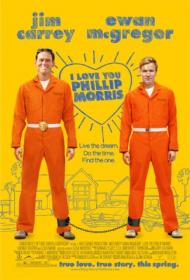 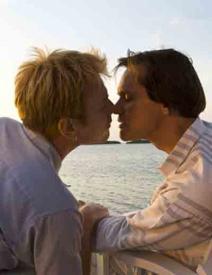 I Love You Phillip Morris is based on a true story from the book by Steve McVicker. The words, “This really happened… It really did.” appear on the screen at the beginning. The facts presented here are bizarre enough that if this were a fabricated story no one would think it was possible. It proves that oft repeated adage that truth is stranger than fiction.

Jim Carrey stars as Steven Russell. He provides a helpful voice-over narration ala Sunset Boulevard or American Beauty. Only this narrator isn’t dead, he is merely dying. He tells about being adopted as a child, about his wife and daughter and his job as a cop. After a near fatal car accident Steven comes out of the closet, leaves his wife and job behind, gets a boyfriend and moves to Florida from Georgia.

To support the extravagant lifestyle he desires Steven commits bank fraud and is sent to prison where he meets and falls in love with the title character (Ewan McGregor with a gentle southern drawl). After experiencing several incarcerated adventures they get released and begin a life together in Texas. Steven has an amazing career which includes litigating in court and being the CFO of a large company. He does all this without the benefit of schooling or previous experience; but simply by bullshitting his way through.

Russell, unable to kick his illegal habits, eventually winds up back in prison where he perpetrates his most amazing fraud, which I won’t give away.

Jim Carrey and Ewen McGregor are both wonderful as these memorable real-life characters. Carrey shows Russell’s confident veneer as a mask for his deeper insecurities. McGregor plays Phillip Morris as a trusting, doe-eyed, sensitive gay man. Russell finds unconditional love in Morris and someone he can protect and provide for. Morris believes that in Russell he has finally found a man he can trust to not take advantage of his naiveté. Together they create an unusual but rather sweet screen romance.

It starts off promising enough as a whimsical breezy little comedy. Unfortunately the tone grows more uneven as the movie goes along. Awkward dramatic bits are inserted that take away from the humor and slow the story down. An incredulous “plot twist” redeems the movie a little by restoring its sense of the absurd, but the ending does not inspire happiness.

I Love You Phillip Morris is an uneven comedy that presents an unusual true love story.

Ewan McGregor and Jim Carrey in I Love You Phillip Morris

I really hate most gay movies.  This has nothing to do with the fact that they contain men kissing.  I hate most gay movies because they almost all end on a sad note, or give a lecture on tolerance.  If it is a drama, someone either dies of AIDS, or gets killed for being gay.  If it is a comedy, then the movie spends 2 hours making fun of religious people or shows a bunch of straight people how to be more accepting.

The one exception to the rule, and the one I have enjoyed the most, is Patrik, Age 1.5 (2008), from Sweden.  It is the best feel good "gay" film out there.  No one dies and none of the homosexuals act holier than thou.  I Love You Phillip Morris takes all of those cliches, mixes them all up  and throws them at you at random intervals.   Some scenes work while others never go anywhere.  Like Patrick, I found it uneven.

The humor works better than the drama.  I laughed out loud when Carrey plays golf and is stuck in the sand trap yelling obscenities.  McGregor's funniest moment is when Morris finds out Russell paid to have someone beat up, and an emotionally overwhelmed Morris says,  "That is the most romantic thing that anyone ever did for me. I love you so much."

Most of Russell's escapes are worth a chuckle, and the movie could have worked had it kept that wink and a smile attitude.  Instead, it throws in too much drama.  Someone dies of AIDS, some hearts get broken.  However, when it wants to be funny, it is.  One of the funniest, and gayest moments, is early on when Russell is showing a new prisoner around, telling him how to get stuff.  Everything involves money or a blow job.  After the tour, they walk back into their cell where the new guys guesses correctly that he now owes Russell a blow job.