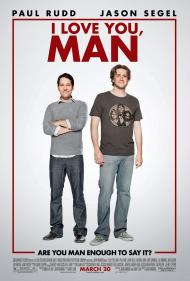 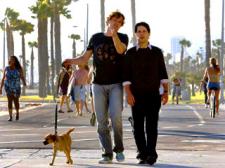 Sydney, and his BFF, Peter.

Lead by MTV shows like Bromance, in which a bunch of guys compete to be Brody Jenner’s friend, and The Real World: Brooklyn, where two guys became fast friends, and joked that they were having a bromance, the subject of platonic male friendships has become a topic of late.

I Love You Man addresses this in a more mature way. Rudd plays a buttoned up realtor,Peter, who happily gets engaged, but soon becomes depressed when he learns that his fiancé has many friends, while he merely has acquaintances. She instantly has her wedding party filled while he has no clue who could be his best man, let alone his groomsmen.

Peter is a likable guy, but he is one of those men who is more comfortable in the company of women than men. In his office he easily greets all of the ladies who work there, but clearly has no connection with the male co-worker who wants to get in on the Lou Ferrigno estate deal. He is likewise uncomfortable with his fiance’s best friend’s husband.

To find himself a best friend, Peter gets set up on some man-dates by his gay brother. I think the writers made him gay just to make it clear that Peter was not. His brother has very few scenes, but makes one important point when he tells Peter that it is easier to hook up with someone for sex than it is to find a genuine friend.

Eventually Peter meets Sydney, and they become friends. Sydney is single and sloppy. He lets his dog crap on the sidewalks, and yells at those who complain about it. He helps Peter to unwind and just be a guy.

Peter’s and Sydney’s friendship demonstrates that guys need guy time, just as girls need girl time. What I found more interesting though, was how it effected Peter’s fiancé. An early scene in the movie reveals that his fiancé shares intimate details of their sex life with her friends. Later in the movie she gets upset when Peter shares some with Sydney.

The message of this movie is that friendship, although not the same as a romantic relationship, is still very valuable to the psyche of the individual. Although this movie says some great things about the value of a friend, I wished it were a bit funnier. It has it’s moments. It milks Lou Ferrigno for all he’s worth, and one particular man-date is hilarious. However, it seems more concerned with it’s message than it does in finding jokes. 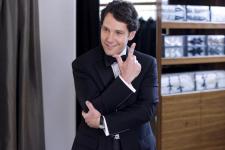 In essence this is a romantic comedy, only to be more accurate it's a platonic comedy between two men. Other than the gender and lack of sex though, the plot structure is laid out exactly like a romantic comedy. Peter and Sydney meet (after Peter has several failed attempts at a relationship), they fall into friendship, a conflict arises, they break-up and eventually get back together, even ending at a wedding (not to each other).

I agree Eric that the script doesn't provide a ton of laugh-out-loud moments, but it does at least keep you smiling. And it's not as though it's trying to be funny and failing, it just doesn't have the number of jokes as you might expect from the previews. Most of the credit for the laughs the movie does provide has to be given to Paul Rudd. After years of small and supporting parts he's finally getting a chance to shine, both here and in the funnier Role Models. He has a likable comic charm that works to his and the movie's advantage.

Rudd also has good chemistry with Segel. Segel plays Sydney as the stereotypical man-boy of the type Judd Apatow specializes in showing off in his movies. He has some funny moments, but takes a back-seat to Rudd, despite having the showier role.

The supporting cast is also quite good and populated by some well-know b-actors like J.K. Simmons, Jane Curtain, Jon Favreau, Jaime Pressly, Andy Samberg and of course Lou Ferrigno. Most of them have small parts, but they add to the overall charm of the movie.

I wouldn't really say this movie has a message Eric, or at least no more than any romantic comedy does. And at least here you can actually see what the two main characters see in each other, which is more than you can see in most romantic comedies these days. 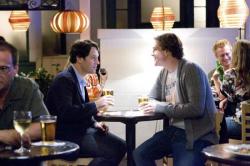 Peter and Sydney get bromantic.

Sydney helps Peter let loose and relax as one of the guys. Something he clearly has never been able to do on his own. Peter helps Sydney face the reality that he is not getting any younger - all of Sydney’s friends are moving on with their lives – and that it is time for his extended adolescence to end. I wouldn’t say there is a lesson here since both guys were pretty happy before they met.

It is only when the subject of the wedding party comes up that Peter realizes he is lacking close male companionship. I have known many guys like Peter that prefer the company of women. There are also men that relate primarily to other guys. Neither group has a monopoly on happiness.

This is true for both straight and gay men. As a gay man I appreciated the fact that the gay brother is more of a jock and more of a man’s man than Peter. The stereotype of the Sex & the City-gay-best-friend-you-take-shopping-and-discuss-your-man-troubles-with gets so tiresome after a while.

The relationship between Peter and Sydney is sweet. You’re right Scott, this is a romantic comedy, without sex, between two men. It demonstrates how the line between romance and friendship can get blurry without sex being in the equation at all. Peter gets anxious before his “date” with Sydney. He is tongue-tied every time they speak on the phone and spends a lot of time thinking about Sydney when they are not together; all symptoms of romantic feelings. The term “bromance” was coined for a reason after all.  It refers to something deeper than friendship.

I agree that the script could have used more jokes but I Love You, Man is refreshing enough in its point of view to be interesting.