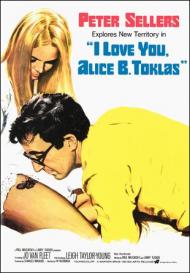 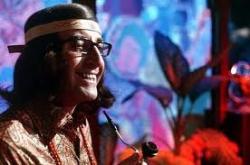 Peter Sellers as an aging hippie.

“I love you Alice B. Toklas… And so does Gertrude Stein.” These are lyrics from the incredibly catchy theme song that plays seemingly throughout this comedy about an uptight Los Angeles lawyer that meets and falls for a hippie chick and then rashly decides to join the counterculture. The title refers to Gertrude Stein’s lifelong lover’s recipe for marijuana brownies. They play an important part in the movie and are the impetus for its funniest scene.

Writers Paul Mazursky (he would later direct such hits as Bob & Carol & Ted & Alice and Down and Out in Beverly Hills) and Larry Tucker wrote the subversively funny, and very of its time-era, script. They had previously written an episode of the television show The Monkees together. They manage to poke equal fun at the status quo and the hippie movement by showing the absurdity of human nature. When a hippie guru tells Peter Sellers that he will know himself only when he stops trying, Sellers replies, “I’m trying to stop trying, Guru.”

In the funniest scene in the movie Sellers unknowingly serves marijuana brownies to his parents and fiancée. His parents begin to laugh hysterically while his fiancée keeps telling Sellers to “take me now.” Jo Van Fleet steals the scene. She plays Sellers’ very Jewish mother. Her laugh is infectious as hell. She was a very talented actress as she had demonstrated the year before playing Paul Newman’s Southern redneck mother in Cool Hand Luke. These two mothers are polar opposites but she pulled them both off beautifully.

Leigh Taylor-Young made her movie debut here as the sex-kitten, hippie-chick that Sellers falls for. Herb Edelman, that you may recognize from The Golden Girls (he was Dorothy’s ex-husband Stan), plays Sellers’ horn-dog, law-firm partner and best friend.

The climactic scene involves a houseful of hippies and Peter Sellers saying to his girlfriend, "I've got pot, I've got acid, I've got LSD cubes, I've got... I've got this thing here... (gesturing towards a stoned guy sitting on his stovetop) I'm probably the hippest guy around here. I'm so hip, it hurts!"

With its long hair, love beads, lava lamps and throw pillows on the floor this movie positively screams 1968. It's a funny look at the foibles of the hippie movement where everyone tosses the word “Love” around but no one has any concept of responsibility.