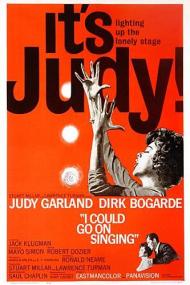 After leaving MGM in 1950 Judy Garland made just two more musicals; 1954’s A Star is Born and in 1963 I Could Go on Singing, which would be her final screen appearance. She plays Jenny Bowman, a legendary and somewhat self-destructive singer. If that sounds familiar it should. Jenny might as well be called Judy, so much is she like the real singer. In fact in one scene Dirk Bogarde tells his son that, “Jenny gives more love than anyone, but she takes more love than anyone can give.” More than one friend made this same observation about Judy Garland.

While in London on a concert tour, Jenny looks up the man with whom she had a son some twelve years earlier. She gave up all custody of her son while he was an infant and hasn’t laid eyes on him since. Dirk Bogarde plays the father. He is a busy doctor who seldom sees his son who is off at boarding school. The doctor, David, is at first reluctant to let Jenny see Matt. He eventually capitulates and Jenny and Matt hit it off grandly. Matt not only has no idea that Jenny is his mother but he also doesn’t know that David is his real father. You see when David married, he and his wife decided to tell their son that he was adopted. It was only after Jenny learned of the death of David’s wife that she decided to seek out a relationship with her son.

Jenny and Matt spend a few days sightseeing around London unbeknownst to David who is in Rome on business. He returns and he and Jenny gear up for a custody battle. Matt overhears them arguing and learns the truth about his parents. In one of the best scenes in the movie Jenny has a phone conversation with Matt where he chooses his father over her. The entire scene is shown only from Jenny’s point of view. I have always felt that every great star should have at least one great telephone scene, where we hear only their side of the conversation. Judy handles this moment beautifully. And it proves just how talented she was as a dramatic actress.

The final big dramatic scene takes place in a hospital room. After being rejected by her son, Jenny went out on the town, drank too much and wound up hurting her foot. She is late for a singing engagement and Dirk Bogarde comes to escort her to the theater. Supposedly much of the dialogue in this scene was adlibbed by Judy. It reeks of loneliness and despair but she also maintains her defiant spirit. It is a tour de force moment.

Judy belts out a few memorable songs. Most notably “I’ll Go My Way by Myself” and the title song which was written by Harold Arlen and E.Y. Harburg, the same guys who wrote “Somewhere Over the Rainbow”. This is one of Garland’s best dramatic performances and quite fittingly her final screen moment is of her in full throttle, singing the title song, head thrown back and arms outstretched towards the heavens.