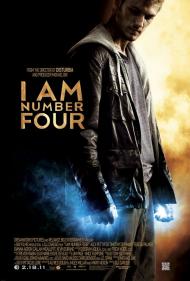 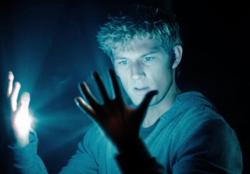 I Am Number Four is an unoriginal teenage-alien-high-school-action movie populated with clichéd cardboard characters. The script is inane, the dialogue insipid and the acting wooden. About the only good things I can say about it are that it has a few unintentionally funny moments and hot young eye-candy of both sexes.

Alex Pettyfer stars as the title character. He is the fourth of nine surviving children from the planet of Lorien. Each of them is supposed to possess special powers. The movie opens with a fairly intriguing action scene in a jungle. We learn that Number Three has just been killed and that the evil alien race known as Mogadorians will be coming for Number Four next. Just why they are killing them in this particular order is never explained.

Anyway Number Four takes the name John Smith and moves with his father figure/alien protector to a small town in Ohio and begins attending the local high school. Too much time is spent on John’s time in school. He makes a nerdy friend, has conflict with the local bullies and falls in love with a popular pretty girl blah, blah, blah. It is about as compelling as watching paint dry.

After the somewhat promising opening sequence it takes far too long for any action or suspense to happen. The villains lack any real bite and it seems to take them forever to track John down. The finale takes place inside the high school and in the football stadium. When Number Six shows up and the dog morphs into a giant alien canine the action finally kicks in but it is much too little and far too late.

There are many stupid plot points but I will just mention one. The reason the finale takes place at the high school is that even though John knows the alien-bounty-hunting-aliens have located him he decides this would be a great time to develop some photographs with his girlfriend in the school dark room.

There is a mysterious box that belonged to John’s father and is supposed to contain some powerful secret. The movie ends without this ever being explained, so either the writers simply forgot about it or they are already planning a sequel. If you are smart you will stay far away from I Am Number Four as well as Numbers Five through Nine if they ever get made. 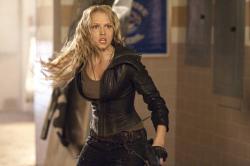 Teresa Palmer is one of the few highlights as Number Six, in I am Number 4.

I didn't dislike this movie quite as much as you did Patrick. It actually had some potential, but is hindered by poor writing and an overly earnest storyline.

This is at best a B-movie. Its aliens living among us being hunted by bounty hunters is not one to be taken seriously and yet the makers of this movie take it too much in that direction. With a lighter tone, some much needed comic relief and a bit of a wink and a nod to the audience about how implausible this all is and this could have been one of those, it's so bad that it's actually good type movies.

Its lighter moments and actions scenes are easily the best parts. Teresa Palmer as Number 6, who only fleetingly occurs during the first two-thirds of the movies, breathes fresh new life into the story when she finally makes a full-on appearance in time for the climactic battle. She fights like a bad ass and more importantly she plays her part with just the right amount of tongue-in-cheek playfulness that lets you know that she's in on the joke.

In contrast to Palmer, Pettyfer and Agron (who, until recently, were dating in real life) play their roles far too seriously. They're both way too old to be  playing high-schoolers (as is most of the cast), and their young love is so sincere and earnest as to be boring. Way too much time is spent showing them mooning over each other. Instead of bothering with all of the high-school soap opera involving Sarah and her ex-boyfriend, their should have been more alien action.

Despite its many weakness and plot holes (like you Patrick, I wondered how come they suddenly had time to develop photos at a moment of crisis (and couldn't they just made the camera digital so Sarah could have just scanned through the pictures without having to develop them?)), I was never really bored while watching. I was always aware of how bad it all was, but I can't really say I was bored.

While it's true I wouldn't rush out to see a sequel, if they made one, but with all new writers and a new director, I might be persuaded to watch it. Clearly the ending is meant to lead into one and the book this movie was adapted from is the first in a series. Given the generally poor reception I am Number Four is receiving, I doubt my resolve will ever be tested. 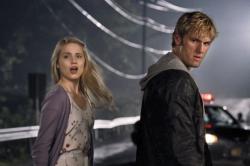 Dianna Agron and Alex Pettyfer in I Am Number Four.

You guys need to lighten up.  I Am Number Four is not that bad of a movie.  I liked it, and would eagerly watch a sequel.

You both missed the point about the pictures.  Number Four stops to get the photos because he simply wants them very badly.  Throughout the movie Henri destroys every image he finds of Number Four.  When Number Four has dinner with Sarah's family, we see that he desperately just wants to belong somewhere stable.  Having pictures of himself and his friends validates his existence.  I believe this is a very relatable issue for many young people who fanatically post their pictures and lives online (Facebook!).

Another thing I was surprised you both failed to mention is that I Am Number Four is merely a science fiction remake of Rebel Without a Cause.  Number Four is the new kid in town who has moved many times because his parent is trying to avoid him getting into trouble.  He falls for the ex-girlfriend of the leader of the school gang.  There is even the picked on little friend, who finds himself fascinated by the new boy in school.  Both films have a scene where the boy beats up his father.   Both films end with the the three main characters having a standoff with the police/aliens.

I do agree with a couple of things my brothers wrote.  Patrick is right that it is stupid that they never explain why the aliens kill in numerical order.  How hard would it have been for the writer to add one line where Henri says, "They are only aware of the next number after the previous one is dead."  Is that so tough?

Scott liked Number Six, and rightly so.  She reminds the audience that this is in fact a science fiction action film as well as a teen drama.  She is the most interesting character, and she adds some unique possibilities to a sequel.  She and Number Four have a bit of chemistry, but we learned earlier that Lorien's only have one mate, and he chose Sarah.  Meanwhile, Sam has the hots for Number Six.  Stay tuned for further teen angst and science fiction action.