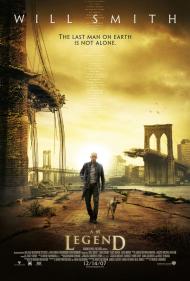 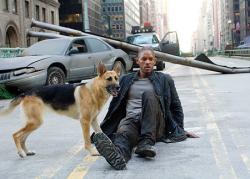 I am Legend, the novel, is the greatest vampire story ever written. Dracula might be more iconic and Interview with a Vampire more famous, but to my mind, nothing beats Richard Matheson's 1954 apocalyptic tale. There had been two previous attempts to turn it into a film (The Last Man on Earth (1964) and The Omega Man (1971)), both with different and ultimately disappointing results. This latest version alters the original story quite a bit, most notably by removing the vampires and replacing them with infected humans who resemble the infected from 28 Days Later and by moving the story to New York City. The changes left me frustrated knowing that there is now very little chance that I'll ever see a faithful adaption in my lifetime, but even more so, it left me highly entertained, since out of the original story the filmmakers have created a different, but exciting and tense story filled with action, suspense and a lead character you can truly care about.

Smith stars as Robert Neville, the only non-infected man in New York City. A man-made plague (originally intended to be a cure for cancer) has spread around the world, killing 90% of the population, leaving 1% alone, and turning the other 9% into animalistic humans with a desire to feed and a fatal aversion to the sun. Neville's only companion is his German Shepard Sam. Together they prowl the city, collecting supplies, exploring the buildings and occasionally capturing an infected so that Neville can test his latest vaccine on it. A military scientist in his previous life, Neville's goal is to somehow find a way to reverse the effects of the virus.

The movie opens with Neville driving through a decaying New York, overrun with weeds and teeming with wild animals. A herd of deer runs through Madison Square Park. There are lions (escaped from one of the cities zoos) prowling through Times Square. It is extremely well-done and downright eerie to see the normally bustling city streets so deserted and decrepit. Just these shots of the city are alone are worth the price of admission.

It's not all just nifty imagery however. Neville has several run-ins with the infected that will leave you on the edge of your seat. When Sam runs into a dark and unexplored building, Neville must follow to retrieve him and is forced to deal with the nest of infected that live within. He uses a method of capturing one of the infected that the infected, who aren't perhaps quite as stupid as Neville thinks, later use against him. The tensest moment of all though comes when Neville is trapped outside of his fortress/home on Washington Square as the sun is going down and he knows that if he can't get home in time he will have an entire city's worth of infected, swarming to get him.

None of this action and tension would mean nearly so much without the performance of Will Smith. His Neville is very human, but his sanity hangs in the balance. His relationship with Sam is perhaps his last best connection with humanity. His portrayal makes the movie work as more than just another end of the world story.

My only minor complaint with anything is the infected themselves. They are created purely by CGI and it's very obvious that they are CGI. Don't get me wrong, CGI has its place in things, but here they just don't seem real enough and you certainly can't see any humanity in them. The decision to not use actors, especially for the ones shown in close-up is the only wrong decision the movie makers made, but even that decision doesn't stop this movie from succeeding on all levels.

I've always been a sucker for a good end-of-the-world story. Hell, I even enjoyed the campy Omega Man. I'm not sure why, maybe it's that I always wonder how I would handle being in that situation. But whatever the reason, I just love movies like these and this is one of the best of the genre. I am Legend defiintely makes my top 5 most enjoyable movies of the year list. 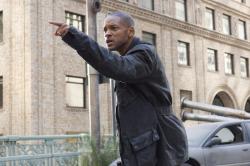 Will Smith carries this movie completely on his shoulders. His character has been without human conversation for a long time. He talks to mannequins as if they are real people. The scene where he yells at a mannequin named "Fred" is one of the most eerie and tense moments I have experienced in a movie all year. When a couple of real humans show up he has no clue how to talk to them. He ends up quoting the movie Shrek to train himself in how to communicate verbally again. Smith is in many scenes by himself and his performance is the movie's greatest effect.

As good as this movie is, it still falls short on a few accounts.

Not only do the infected look fake but so do the animals. Anyone who has watched any amount of Animal Planet can tell how obviously unreal the deer and lions are. The writers should have left the infected as vampires. As portrayed here, I am Legend looks like a companion piece to 28 Days Later. Robert is dealing with the infected in New York while Jim is fighting them in England. Other than the fear of UV rays, the infected in both movies act just alike. The other problem is the ending. Not only does it reinforce the comparison to 28 Days Later but it is a downer.

Scott likes to mention that I see conspiracies in movies. I once saw an interview with Will Smith and he admitted to being a conspiracy nut. Well here's one for you. Why is Smith never opposite a blonde. All of his female co-stars are either black, Latin or have dark hair. Legend of Bagger Vance does not count as Charlize Theron is Matt Damon's love interest not Smith's. Is his long successful movie career playing opposite dark haired women just a coincidence or is Hollywood scared to put him opposite a blonde caucasian actress? 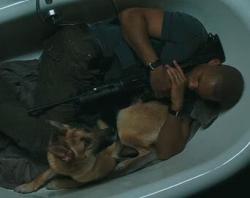 A few years ago Scott loaned me the book "I Am Legend"; as he wrote it is a great story. I do, however, think the decision to change the setting to New York City from Los Angeles was a smart one. The story seems more appropriate in the asphalt jungle. Though the ending here is very different from the book, the one thing this movie does translate well from the print version (and that the Charlton Heston version lacked) is to show the damaging psychological effects of being the last man in the world.

I do agree that the CGI humans and animals are obviously not real but I can overlook this problem. They don’t stop the movie from having some truly tense and scary moments. Will Smith does an impressive job. Who would have thought that the Fresh Prince could be believable as a brilliant scientist? He has grown and matured into one of our best Movie Stars.

I didn’t see the ending as a downer. On the contrary, it’s uplifting and anyone familiar with the story knows it has to end this way. Robert Neville represents all that is noble in the human spirit and nobility requires sacrifice.

They also got the pacing exactly right. I Am Legend is a 90 minute decrepit future movie that should please fans of the original book as well as those just looking for a big budget action flick.