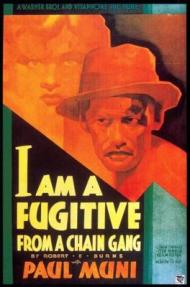 Paul Muni in I am a Fugitive from a Chain Gang.

In the early 1930's Hollywood actually made a conscience effort to put out socially moral films. Public Enemy is one of the most notable and best. Another one that should not be over looked is I am a Fugitive from a Chain Gang. Sure it's a crappy title, but it is a pretty good film.

Returning World War I veteran James Allen, turns down a factory job, and turns into a hobo. He gets arrested for a robbery that he didn't commit and ends up in a chain gang. He escapes, and goes to Chicago. He gets a job in construction and before you klnow it he is a successful engineer.

A girl he meets finds out his past and black mails him into marrying her. She has affairs on him and spends his money like water. When he meets and falls in love with Helen he asks his wife for a divorce. She stands good on her threat and notifies the authorities.

James agrees to go back to the chain gang with a promise that it is only temporary. At least when it is over he can get his divorce and marry Helen. However, the warden is a bit upset about all the negative things James publicly said about the chain gang and has no plan to ever let James out early.

I am a Fugitive from a Chain Gang is a look at a prison system no longer in existence. It is also a look at social conditions from nearly a hundred years ago. When James first meets Helen he asks her if she is available. She gives the politically incorrect response, "I am free, white and 21." Also it shows a guard keeping track of the inmates by having one list of whites and one of Negroes.

The movie tries to show that being a fugitive is a difficult bad thing. However, James meets up with an old friend who supplies him with alcohol and a prostitute for a night. When he first meets Marie she practically begs him for sex. According to this movie, being a fugitive means having a good time unless you get caught.

The ending is very obscure. It is supposed to be a lesson but it makes for a weak ending when the main characters final fate is never revealed. 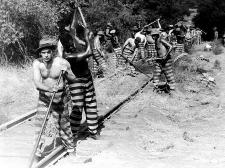 The grandaddy of all chain gang epics.

Eric, you seem to have missed the point of this movie, which was to point out the corruption in the Southern chain gang prison system. First of all this is a true story. It was based on an autobiographical novel written by Robert E. Burns. He was a shell-shocked veteran of the first world war, that got caught up in a petty crime, like James Allen in the movie, and wound up on a chain gang in Georgia. Also like Allen, he really escaped twice and was still on the lam when the book was published in 1932. Hence the ambiguous ending since he didn’t yet know himself how his story would turn out. He remained free and the publicity from the book and this movie helped eliminate chain gangs from the South.

The only part of the movie that differs greatly from the book is Allen’s second escape. In the movie he steals a truck and uses dynamite to blow up a bridge. According to the novel he made his final escape by hiding on a watermelon truck and was gone an hour before the guards missed him. But hey, Hollywood has to entertain after all.

Paul Muni is the great forgotten movie star from the 1930’s. He was in the original Scarface and was nominated six times for the Best Actor Oscar, including this movie, and winning for The Life of Emile Zola in 1937. He later won both an Emmy and a Tony. Sadly, outside of classic movie buffs, his name is now all but forgotten. One explanation for his lack of face recognition today is the fact that, like Lon Chaney, he was famous for disappearing behind his characters through make-up, costumes and accents.

This movie is a spare, hard hitting pre-code classic. Sure some of the acting is a bit melodramatic but the scenes in the prison camp set the standard for everything that has followed. Every chain gang picture from Cool Hand Luke to O Brother, Where Art Thou? owes a debt to Warner Bros’ I Am a Fugitive from a Chain Gang. The down on his luck hobo look that Muni sports here would be copied by Joel McCrea in Sullivan’s Travels and by Humphrey Bogart in Treasure of the Sierra Madre. Clearly this is the granddaddy of that subgenre of the prison movie, the chain gang epic. A must see for every serious movie buff. 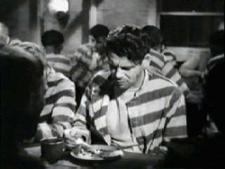 Paul Muni is a fugitive from a Chain Gang.

What's really impressive about Paul Muni's career is that not only was he nominated 6 times (if you count his write-in nomination for Black Fury) for an Oscar, but he only made 25 films. That means that nearly 25% of every role he played was nominated for an Oscar.

After watching Muni in succession in Scarface and then this film, what struck me most strongly about him is how different the two characters were. You take the average movie star of the 1930s, says Gable or Cagney, and they pretty much played the same character in every film. Muni was in some ways ahead of his time. Although some of the acting here is a bit over-the-top, he's actually a very natural actor compared to many of the time.

I agree, you really missed the point of this movie, Eric. Post Hays-Code this movie might have taken the side of the system and showed Allen, the criminal, getting his punishment. Here though, it is the penal system that is shown to be wrong and Allen who is shown to be in the right. It's not trying to show hard it is to be a fugitive, but rather how hard it is to be a prisoner. The other prisoners are shown to be murderers and dyed-in-the-wool criminals rather than wrongly-accused men just to drive home the point that the chain gang system was wrong irregardless of the crime committed.

The dynamiting scene during the final escape felt out of place to me. It seemed over-the-top and not right for the film. I know that Allen had been pushed to his limit, but his friend getting shot and them using the dynamite seemed like something from a different movie.

I do agree with you strongly about one thing Eric. It really is a crappy title for a film.