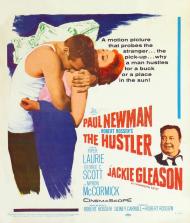 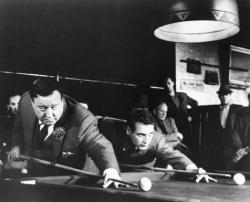 Jackie Gleason and Paul Newman in The Hustler

The Hustler is one of those movies that I'd always meant to watch. It's considered a classic and its sequel (The Color of Money) is the movie that finally won Newman the Best Actor Oscar, although many considered that win a career win rather than for that specific role. I have to say that after watching it, Newman's performance certainly lived up to and exceeded my expectations, the movie as a whole, while brilliant in flashes, is a little rough around the edges and could have used further refinement. That's not to say that it isn't great, because it is, but that it's not nearly perfect.

Newman plays Fast Eddie, a young pool shark and the hustler of the movie's title. He's good.  Very good, but he's still young and naive in many ways. His one goal is to go up against Minnesota Fat (Gleason, in a small but memorable part), who is considered to be the greatest living pool player, and beat him. Shortly into the movie, he gets that chance and plays a mammoth 40 hour pool session going through downs and ups (at one point he's ahead $18,000), before finally losing it all when he doesn't know when to stop.

Following this tournament, Eddie meets and moves in with Sarah; a quirky young and aimless girl. In a sign of the declining Hayes Code, Eddie and Sarah are shown living together and obviously sharing a bed. Both of them are marred and flawed human beings who cling together for comfort in a world that seems to be over their heads. They're both interesting characters and their parts are well acted, but this middle portion of the movie is the part that should have been trimmed. The total film runs over 2 hours and 10 to 15 minutes from the second act could have been chopped.

George C. Scott plays gambler Bert Gordon. He takes an interest in Eddie after seeing him play Fats. He offers to bankroll Eddie, but wants 75% of any winnings they make. Reluctantly and without any real choice, Eddie agrees. He, Bert and Sarah go on the road and while at first things seem to go alright, shortly into their trip, tragedy strikes and it all comes abruptly to a halt.  All that remains is for Eddie to find himself by competing in one last pool match.

Newman is simply perfect in this part. Eddie isn't the most likable of characters, but he is a riveting one. It is Newman's innate, personal charm that keeps you rooting for Eddie. You feel his highs and his lows. This is one of several of Newman's performances that deserved an Oscar.  He was nominated for it, but didn't win.

The supporting cast is equally good. Gleason, Scott and Laurie were also nominated for Oscars and all of them deserved it. Scott stands out in particular. He's quite slimy, and yet possesses an evil charm. Laurie is flawed and the character most deserving of pity. Gleason, while credited second, has the smallest part of the main cast and yet his large shadow looms over the movie.

Some of the dialogue is a touch melodramatic, but still manages to move nonetheless. It does date the film, however.

The biggest flaw is the pacing in-between the games of pool. It really drags in the second act and the finale, while good, rushes by too fast when I wouldn't have minded seeing more of it.

If, like me, you only know the character of Eddie from The Color of Money, you might be surprised at the differences between that movie and this one. This one is a much darker and more human drama. It's definitely not a feel good movie, but it is a satisfying one, despite its few flaws. It's certainly worth watching for Newman's performance and some well-filmed games of pool.

Paul Newman and Piper Laurie in The Hustler.

The way the story is told is unusual. The marathon pool battle between Fast Eddie and Minnesota Fats takes up 20-30 minutes of screen time during the first act. Obviously there will be a rematch before the movie ends. But when it finally occurs during the final 10 minutes, as Scott mentioned, it is rushed through and ends almost before it begins. Dramatically, wouldn't it have made more sense to have the marathon match at the end of the story?

Paul Newman as Eddie Felson embodies the cocky young hot shot. He has more raw talent than Jackie Gleason's Minnesota Fats but, as George C. Scott's Bert Gordon tells him, he lacks character. He doesn't know how to pace himself and he lets the booze and length of the match get to him, while Fats, being older and more cunning, keeps his wits about him. They make like the proverbial tortoise & hare. Eddie is faster but Fats gets to the finish line first. It is only after experiencing personal tragedy that Eddie grows up enough to become a winner.

Like my brother I was impressed with the entire cast. Newman is brilliant and his brilliance is matched by his costars. Piper Laurie gives a powerful turn as the alcoholic Sarah Packard with vague daddy issues. She plays a very convincing drunk and one of the saddest characters you are ever likely to come across. Sarah's take-no-prisoners story arc is extremely dark and depressing. Jackie Gleason and George C. Scott are both very effective as well. The one performance my brother didn't mention that I also thought was quite good was by Myron McCormick. He plays small time manager Charlie Burns, that Eddie walks out on.

The script is intelligently written and the characters are completely realized without much background information. I disagree with Scott about the dialogue dating the movie. On the contrary I think it holds up better than most movie dialogue from 1961. The way director Robert Rossen sets up his shots (most notably during the pool games) is inspired and the black & white cinematography gives the movie a gritty, realistic look. It was shot entirely on location in New York City over a six week period. I can't say The Hustler is great entertainment because it's a bit too methodically paced for that, but it is an extremely well-crafted movie with great performances all around and a dense emotional center.

Like many people, I had always assumed the character of Minnesota Fats was based on an actual pool player. In reality pool shark Rudolf Wanderone Jr., who had previously been known as New York Fatty, changed the geography of his nickname to Minnesota after the huge success of this movie. He parlayed it into book and television deals that made him a wealthy and famous man. 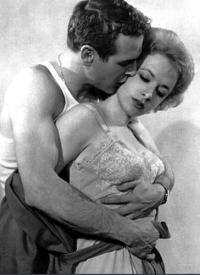 Paul Newman and Piper Laurie in The Hustler

Sarah is not only a drunk, but a woman of questionable morals. She has clearly traded her ass for alcohol more than once. Shortly after meeting, Eddie says to Sarah, "Look, I... um... can always buy a bottle. A fifth of scotch?" Sarah asks suspiciously, "What'ya want me to do - just step out in the alley? Is that it?"

At first she assumes he is only after her for sex, and she may be right. He makes a move at her door. After their first night together, Eddie tells her,"I'll be back later." Sarah asks simply, "Why." She has obviously had many men spend the night only to leave for good the next morning. She even tells Eddie to shave before he goes out and to use the men's razor and shaving cream in her bathroom. However, he does come back and they form a relationship.

Their romantic little world is at first based simply on finding pleasure in each other's arms. The mere presence of each other is therapeutic. Note how Sarah wants to make him dinner and is sober. After Eddie argues with his manager he has a drink and says to Sarah, "Aren't you gonna have one." She slowly pours herself one and they kiss. In the next scene she is drunk out of her mind. The story she writes reveals that she considers their relationship a depraved one.

She and Eddie have both been around the block and seen hard times. They deserve each other. Eddie accepts Sarah with her flaws and past. She in turn sees right through Eddie. She calls him a bum, while he sees himself as a hustler. As Patrick noted, Eddie desperately needs to grow up. His ego is his worst enemy.

I enjoyed the dynamics in the relationship between Eddie and Sarah. Each acts as the other's enabler, while the audience hopes that they will be able to save each other from their vices. After Sarah twice tells Eddie that she loves him, he asks, "You need the words?" Sarah replies, "Yes, I need them very much. If you ever say them I'll never let you take them back." We really want them to find happiness with each other.

Paul Newman is riveting as Eddie. His charm and screen presence is the kind we rarely see. Like James Dean, Steve McQueen or even Marlon Brando, Newman commands your attention without even speaking a word. Eddie is not a likable person by any definition. He is a hard headed arrogant bum, who grows through his relationship with Sarah and some hard experiences.  In lesser hands than Newman's, we would not care what happens to Eddie.

Patrick wrote that Sarah has daddy issues, and that may be true, but it is Eddie who needs a father. His manager and later Bert, act as his father figure. Both try to pull Eddie out of his youthful ignorance. There is plenty dramatically going on here to keep your interest, but an occasional lighter tone of perhaps a few jokes may have helped this depressingly dry plot. 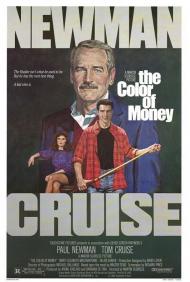