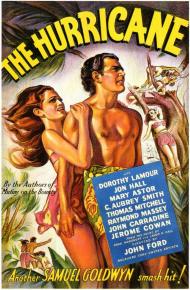 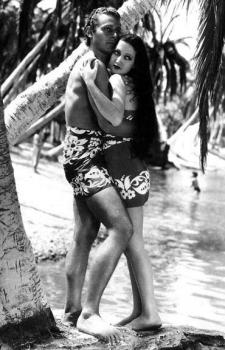 Jon Hall and Dorothy Lamour in the South Seas.

The Hurricane, from director John Ford, is a big budget Black & white adventure movie set in the South Seas during the reign of European colonialism. Not surprisingly the plot and action all climax with a hurricane that is very well done and is even more impressive when you consider the available technology in Hollywood in 1937. Some of the movie was actually shot on location in Pago Pago, Samoa. The native village was built on the United Artists back lot.

The hunky Jon Hall stars as Terangi a South Seas native working as a sailor. Hall was the son of actor Felix Locher and a real Tahitian Princess and his role as Terangi made him a star. Although he would never get another part as good as this one. Dorothy Lamour, at the beginning of her career, plays Terangi’s young wife Marama. Yes, she wears a sarong in this one and wild flowers in her hair.

Terangi commit’s a minor offense against a wealthy white man, while on another island and gets tossed in jail. Unable to take confinement he attempts to escape over and over. Each time he is caught more years are added to his sentence until it appears that Terangi will never again see his beloved Marama or his home island of Manakoora.

The supporting cast is impressive. John Carradine plays a sadistic jail guard. Raymond Massey is the implacable by-the-book Governor of Manakoora, who refuses to lift a finger to help get Terangi’s sentence reduced. Even at the pleading of his kind-hearted wife played by Mary Astor. Thomas Mitchell plays an alcoholic (when didn’t he?) doctor 2 years before playing a very similar character in Ford’s Stagecoach. C. Aubrey Smith rounds out the cast as Father Paul. His tiny church being the last building standing during the raging tempest.

Exotic and romantic The Hurricane is a glorious example of movie escapism made at the height of the studio era.