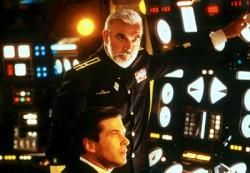 Sean Connery and Alec Baldwin in The Hunt for Red October

The Hunt for Red October was one of the last great cold war inspired films.  Like its inspiration, this film presents how easily a war between The United States and Russia could have started.  Made in 1990, The Hunt for Red October is a celebration of the United States's military might.  There is no grey area here, Americans are the good guys and Russians clearly the bad.

The movie starts with a Russian submarine, the Red October, on its maiden voyage.  It contains a new propulsion system that makes the Red October, "...virtually undetectable."   We soon learn that its Captain, General Ramius has a plan of his own.  He kills the sub's political officer and announces to his crew they are going to Havana, Cuba.

The Russian Navy is sent after him, not wanting the submarine to fall in America's hands.  Meanwhile, the United States military believes he is a rogue officer bent on starting World War III.  The Red October now has the world's two largest navy's hunting her, with the intent of sending her to the bottom of the Atlantic.

The Red October's only chance lies in the hands of CIA analyst Jack Ryan.  He once met Markus Ramius and is trying to convince those who will listen, that it is a defection and not an act of war.  As the Red October could place nuclear war heads off the coast of the United States, or any other country, undetected, he has damn little time to make his argument.  He is sent out to the Atlantic fleet, to make his pitch.

The Hunt for Red October is tense and exciting from start to finish. The entire plot is a game of hide-n-seek with the possible penalty of losing being nuclear war.  Every one is on edge, including the audience being on the edge of their seat.  One of the best scenes being when Ryan has to convince the Captain of the USS Dallas, an attack sub, not to fire its missiles on the Red October.

I thoroughly enjoy much of the dialogue.  There are the quick one liners such as,  "Russians don't take a dump without a plan."  and "You arrogant ass. You've killed us!"  I like how the President's National Security advisor  condescends to the Russian Ambassador, "Mr. Ambassador, you have nearly a hundred naval vessels operating in the North Atlantic right now. Your aircraft has dropped enough sonar buoys so that a man could walk from Greenland to Iceland to Scotland without getting his feet wet. Now, shall we dispense with the bull?"  The Ambassador responds, "You make your point as delicately as ever, Mr. Pelt."

This, so far, has been Alec Baldwin's greatest film in which he plays the lead role.  His Jack Ryan is nervous, slightly awkward and not always in his element.  "Next time write a God Damn memo!"  He says to himself more than once.   In fact, despite my affection for Harrison Ford, I will state here and now that Baldwin was the best Jack Ryan of them all.  He and Paramount studios had a falling out over Jack Ryan sequels and he was replaced with Harrison Ford and later Ben Affleck.  Baldwin has since become a successful television actor and has made many films but has never again reached the box office height of this movie.

The rest of the nearly all male cast is good as well.  Connery, wearing a reported $20,000 hair piece is perfect as Ramius.  The gravitas his career brings to the role makes him the ideal authority figure.   Connery has such presence that I forgive his Scottish accent.  Like Clark Gable in Gone With the Wind, Connery was too big a star to be trifled with such details as an accurate accent. 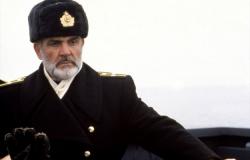 Sean Connery in The Hunt for Red October.

Tom Clancy novels appeal to a certain type of guy, the military nerd. The kind of guy who memorizes naval hull numbers in the same way other guys memorize baseball statistics or the cast lists of Star Trek, including the actor who played crewman number 6 in episode 13, season 1. Although the movie versions of his Jack Ryan stories aren't quite so nerdy, they are still—as Eric pointed out—most definitely Guy Movies.

It's ironic then that the biggest fan of this movie that I've ever known, was my first wife. Because of her I watched this movie more times than I can count back in the 1990s. Of course, that had a lot to do with the fact that Sean Connery, one of her favorite actors, is the star. I do have to agree with her that despite Alec Baldwin's nice turn as Jack Ryan, it is Sean Connery who really makes this movie work for me. His presence and voice, despite the Scottish burr, give Ramius an old fashioned dignity, strength and sense of authority that makes it quite easy to believe that he is the commander of one of the world's most powerful naval vessels. He also brings a tinge of sadness and world weariness that provides some depth to his character. Sadly, although he has made a dozen or so movies since this one, this was his last truly great film.

I'm not sure I agree with Eric that Alec Baldwin is better as Jack Ryan than Harrison Ford, but he is damn good. Far and away better than Ben Affleck certainly, although that has more to do with this being a better film in general than any weakness on Affleck's part. What Baldwin's Jack Ryan has that makes him so great is that he's a very human character and not a superhero or super spy by any measure. He's a bookworm who's suddenly thrust into world events. He's forced into action, even if he never quite seems comfortable with it. I do agree with Eric though that this is far and away Baldwin's best movie. It's a shame that he couldn't come to terms with the studio, although if this had turned into a successful franchise then his career might have taken a different path and he would never have appeared on television's 30 Rock, so swings and roundabouts.

As Eric mentioned, during some of the scenes underwater it is obvious when green screens were used. The scene that's always annoyed me as being obviously fake though, is one of the simplest scenes in the entire film. Near the end when Sean Connery is talking to another character on top of the submarine at night, it is painfully obvious that the night sky behind them was added in post-production. Could they really not get the actors outside at night? Apart from those one or two scenes, the production values are quite high.

Eric, I do disagree with your first paragraph somewhat. The movie's not so completely black and white as all that. Yes, we're rooting for the Americans to get to Ramius first, but the Russians aren't shown to be evil, just the American's opponent. It's more like watching two chess players. You may root for one over the other, but this movie isn't anti-Russia propaganda as it might have been if it had been made before the fall of the Berlin Wall.

Although I've seen this movie so many times and know exactly what's going to happen at every turn, I was still able to watch it and be entertained, which has to be a good sign. I've never been tempted to read a Tom Clancy novel. I'm just not a military nerd, but I am a movie nerd and as such this movie appealed to me.

A memorable special effect shot in The Hunt for Red October.

While I enjoyed this movie I do have one small complaint. It takes too long to get up to cruising speed. Once Jack Ryan gets sent out to the ship the story really kicks into high gear and stays there for the duration. But it takes more than an hour into the movie for that to happen. A few of the introductory scenes could have been trimmed or cut. The story jumps around a lot and crams in numerous characters, a few of whom are superfluous.

I agree with Eric that Alec Baldwin makes a better Jack Ryan than Harrison Ford. Ford is such an iconic action hero that he never seems convincingly in over his head and he doesn't project the same level of nerdy intelligence that Baldwin does so effortlessly. Baldwin really shines in the scene at the end where he is alone hunting the Russian bent on destroying the nuclear sub. He is clearly scared shitless but he is also determined to save himself and everyone else aboard the sub. Bravery, after all, isn't about not being afraid, it's about facing down your fear and doing whatever needs to be done. His line of incredulity when he realizes the guy is the cook is delivered perfectly and brings an unexpected moment of levity to an extremely tense situation.

I agree with Scott that the story isn't as black and white as Eric says it is. Both sides are shown being willing to do whatever it takes to come out on top, diplomatic falsehoods roll just as easily off the tongues of the Americans as they do the Russians. I also concur with you Scott that Sean Connery elevates the movie to a higher plane. You hit the nail on the head when you wrote that he, “brings a tinge of sadness and world weariness” to the part. He makes Marko Ramius a man I wanted to know more about.

The special effects in this pre-CGI era movie hold up quite well. I did notice the bad green screen shot of the night sky that Scott mentioned. It really stands out. And a few of the underwater shots are likewise noticeable but this is offset by the realism of the scenes above water. Eric mentioned the sub jumping out of the water, which I too found impressive (see photo). The final underwater explosion that is shown from the perspective of the surface is also very believable.

The Hunt for Red October is solidly entertaining with a memorable cast. Still for me it falls just short of being a four star classic.