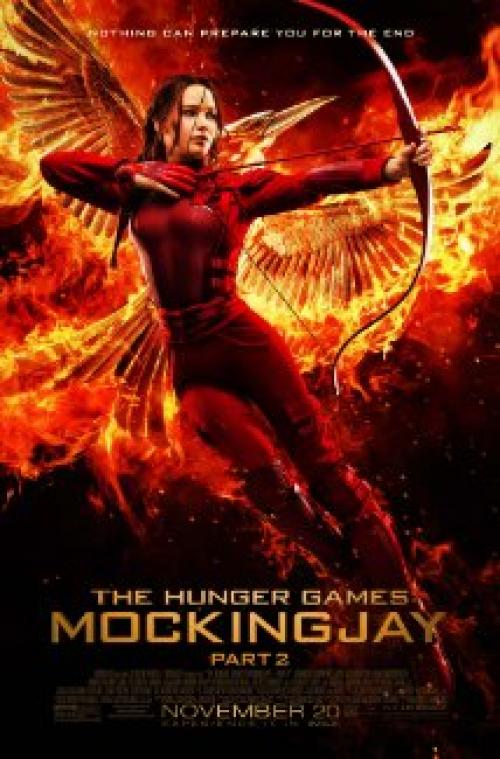 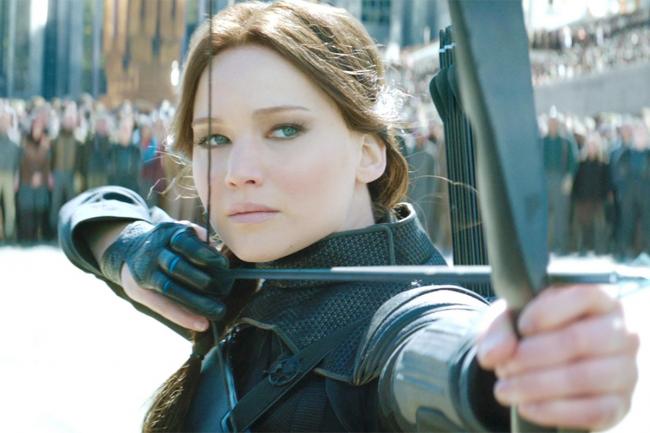 After following the now normal routine of splitting the final novel in a series into two films, the Hunger Games comes to an end. After the disappointingly slow Mockingjay Part 1, this second installment picks up the pace and the amount of action by comparison. However, the series as a whole would have been better served if the final two films had been edited more tightly together. There's enough story to support two films, but they didn't both need to be this long. Despite this complaint however, overall this series has been solidly entertaining and remains at the top of the heap of young adult, dystopian future, genre films that have proliferated over the past few years.

The story picks up right where the last film ended. Katniss (Lawrence) is recovering from the attack by a brainwashed Peeta (Hutcherson). Meanwhile, the rebellion against the capital is moving forward. Katniss wants to take a more active role and finds herself in conflict with President Coin (Moore), who wants to keep Katniss in a purely symbolic role while also reining in her potential political power. As she usually does, Katniss gets her way anyway, by sneaking off to the Capital where the final attack is going to take place. She wants to be the one to kill President Snow (Sutherland).

The film's best action scenes come during the attack on the Capital. Snow has instructed his Gamemasters to booby trap the city, turning the place into a sort of real life Hunger Games arena. Katniss and a band of picked soldiers, who are originally assembled purely for propaganda films, go off script when they decide to take matters in their own hands and try to penetrate the Presidential mansion so that Katniss can confront Snow. Their journey takes them through the bombed Capital and into the sewers. Along the way they are plagued by traps of all kinds as well as zombie-type mutants in the film's most exciting scene. And be aware, the story doesn't shy away from killing off characters along the way.

As has always been the case with this series, Jennifer Lawrence is terrific in the lead role. It's hard to believe but when she was first announced in the part, many fans of the books protested because they didn't think she looked enough like the way Katniss was described. Over the course of this series, she's gone from rising star, to bona fide superstar and Oscar winner. This might be a science fiction, young adult, action film, but that hasn't stopped Lawrence from bringing her A-game. She plays her part with an intensity that is rare for these types of films.

The series hasn't had a problem attracting other acting heavyweights. This movie alone features 5 Academy Award nominated actors (Lawrence, Harrelson, Moore, Hoffman, Tucci) who have a total of 15 nominations between them, with 3 of the 5 (Lawrence, Moore, Hoffman), winning the award. Hoffman died before filming was complete and subsequently his character's part has been reduced. What would have been his final scene has been given to Harrelson, who reads what would have been Hoffman's final speech as a letter from him to Katniss.

While the ending is satisfying, it is rather grim, despite the happy ending epilogue. As I said, not every character makes it through alive, and Katniss remains scarred by the things she has done and seen. The love triangle, which was always played up more in the movies than it was in the books, comes to its end, but I doubt anyone will be surprised by how it plays out. It's always been pretty obvious who will end up in Katniss's arms. However, even the resolution of the love story is tinged with sadness.

Although this now marks the end of the original trilogy, Lionsgate CEO Jon Feltheimer has said they are looking for ways to continue the franchise, either in the form of a prequel or sequel. News that will no doubt "delight" my brother Patrick, who has never been this series's biggest fan. I'd be intrigued to see where they might take the story, but they should do whatever it takes to get Lawrence involved in any further films. If they lose her, they lose the series's heart. 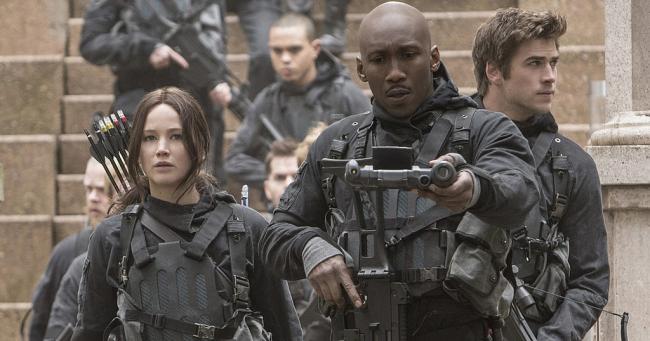 I've definitely never been this series's biggest fan. While there have been individual scenes that worked for me, and I agree that Jennifer Lawrence is great as Katniss Everdeen, at best I've tolerated these movies. I'm not at all sorry to see them end and I have zero interest in any future Hunger Games installments. I do agree with Scott that Mockingjay - Part 2 has the best action scenes of the entire series, but to be honest that isn't saying much.

I'll focus on the positive. Elizabeth Banks and Jena Malone -although both are underused- play two of the most colorful characters in Panem. The eternally effusive Effie Trinket, fluttering about like some sort of rare exotic bird, and the slightly mad Johanna Mason, as unpredictable as she is loyal. Without their presence The Hunger Games would have a lot less flavor.

The relationship between Katniss and Peeta has always been the true heart of the series and they wrap it up nicely. You really feel the bond between them. Like in Harry Potter there is the death of a major character. For anyone like myself who hasn't read the books, there's another plot twist as well. Although the way the scene is set up gives away the surprise so it lacks any real shock value.

The most difficult reviews to write are the ones for movies you have no strong feelings or opinions about. Such is the case here. I didn't love it and I didn't hate it. But like the previous three Hunger Games movies, I know I'll have completely forgotten any details about it in a few weeks. The only real emotion it produced in me was relief that the series has come to an end (hopefully). 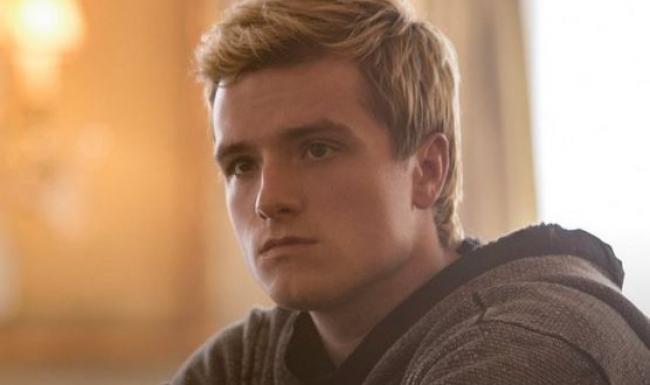 I understand Patrick’s point as I went into the theater having forgotten nearly all that happened in Part I. All I, or anyone, needs to recall is that Katniss is the symbolic leader of the rebels assaulting the authoritative government. She is in love with two different young men. Roll the film please.

Agreeing with my brothers, the action scenes here are the best in the series and it is clear that the film’s budget has grown with every installment. The special effects have never looked better but the flow of the film seemed odd. There is an assault on the city and then everything changes. Katniss’s sister shows up out of nowhere for dramatic purposes. What was she doing there?

As Scott wrote, the ending is grim, even though it is intended to be a happy one. Not only is Katniss scarred but pretty much every survivor in the film is as well. I am not even sure you could call her the victor.

The end to the love triangle was not as emotionally satisfying as I had hoped. Spoiler alert: she ends up with Peeta but it was not as romantic as it could have been. After being brainwashed and not knowing what is real or a lie, Peeta ends questions with, “Real or not?” When he asks Katniss, “Do you love me? Real or not?” She pauses a second before answering “Real” in a less than convincing manner. Would it not have rang with greater sincerity if when he asked that question she answered before he completed the “Real or not” part. That should have been the films romantic pay off scene but it lacks conviction and a sense of rejoice.

For me the love story hit its high note when a confused Peeta falls behind during the journey through the Capital. Katniss drops to a knee and kisses the collapsed Peeta, looks him in the eye and says, “Stay with me.” Peeta stares back and says with all the conviction his heart can muster, “Always.” His love for her at that moment is without question.

Jennifer Laurence has played Katniss Everdeen as such a real, heartfelt character that we have come to like her in ways we usually do not with characters in these types of films. I wanted very much for her to have a completely happily ever after ending but this happy ending is likewise a very sad one. I guess it stays true to the story but I was not completely satisfied by it. Katniss won the war but she paid a high price. 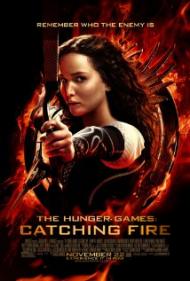 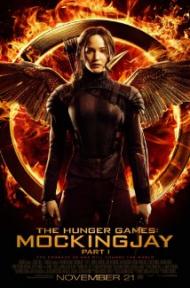