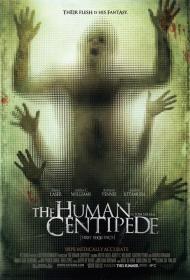 The Human Centipede is proof that any idea can be made into a film.  What is worse is that it also proves that no matter how vulgar a film is, some one will watch it.  Guilty!  Comedy Central is responsible for making it at all famous in the United States.  Daniel Tosh talked about it on his show Tosh.O and South Park spoofed it.

Dr Heiter is a scientist with a dream.  He wants to create one living creature out of three humans. "I hate human beings." He wants to create a human centipede.  He abducts two American girls and a Japanese tourist.  He brings them to his basement laboratory in his home in the woods.  He surgically attaches the first girl's mouth to the anus of the Japanese guy, and then the other girl's mouth to the anus of the first girl.  Voila!  Instant human centipede.

Yes, it includes a scene where the Japanese guy takes a dump in the girl's mouth, forcing her to swallow it.  "Feed Her!"   Clearly the director and writer of this movie, Tom Six, is into feces consumption.  He lists as one of his favorite films Salo, or the 120 Days of Sodom (1975) which features several scenes of people eating and enjoying human shit.

What is it about a Germanic mad scientist that makes them seem far more evil than any other.  From Victor Von Frankenstein to Joseph Mengele to Mel Brooks as Professor Max Krassman in The Muppet Movie (1979), Germans are the epitome of the deranged genius.  Perhaps the accent has the right menacing sounding tone, "You want to bite me? Bite my boots!"

The Human Centipede is for curiosity seekers only.  There is very little plot.  The three try to escape, while some policemen investigate.  Not much happens, but the sight of the human centipede will stay with you, and hopefully not cause you nightmares.  Apparently this film found an audience though, as a sequel was made.  There is no accounting for taste.