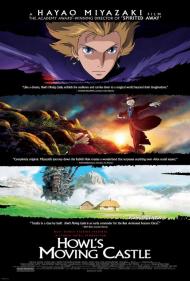 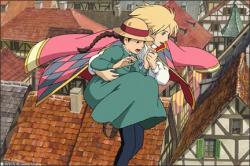 I've always been indifferent to Anime. While there are those who are utterly fanatical about it as an art form, some to the point where they make old-school Trekkies look like casual fans, to me the characters and the plots all look the same. Howl's Moving Castle however, while not making me a fan of the genre to the point where I want to rush out and see more, is an entertaining cartoon and did at least demonstrate to me the appeal of Anime.

Its story is that of a fairy tale. Set in a country and a time that looks like Europe in the very late 1800s, it tells the story of Sophie (Emily Mortimer in this English dubbed version), a shy young girl who meets the mysterious Howl (Christian Bale) one day while walking to see her sister. Howl, a young wizard who reputedly eats the hearts of beautiful young girls, rescues her from the unwanted attentions of two soldiers and then protects her from the minions of the Witch of the Waste who are following him.

The Witch, in retaliation, casts a curse upon Sophie, turning her into an old woman. Sophie flees her home town before her family can see her in her new condition and ends up in Howl's Moving Castle where she meets a very odd assortment of characters. Once settled in her new and odd home, she becomes mother to the band of misfits, cleaning the place up and turning the odd group into a family.

The castle itself is a hodgepodge of buildings jammed together and balanced precariously on walking legs that are powered by a fire demon (Billy Crystal in full scene stealing mode) that shares a mysterious connection to Howl. The door to the castle is a portal that can open onto different parts of the country so that under different identities, Howl lives in several towns at once. By changing a dial he can open the door and walk out into the capital as one wizard, or he can turn it to another setting and it will open in another town some where far away.

Along with the magical mystery touring castle, there is a war brewing in the background of the plot and it's one that the King's wizard wants Howl to join. Howl, a vain and somewhat self-obsessed young man, wants nothing to do with the political intrigue, but is inexorably drawn into it anyway.

As you can tell by the description of the plot, this is not your typical Disney cartoon. The story is complex, and while very funny in parts and even contains a couple of cute sidekicks, is not intended for very, very young children, who would no doubt enjoy the visuals, but might get lost in the plot, some of which is never fully explained.

Visually this movie looks like every another Anime that I've ever seen. The girls all have impossibly large eyes and the men all have long hair. Everyone looks thin and elf like, except for those who are really fat, who tend to go to the extreme the other way.

As a lover of Fantasy and Sci-Fi books and movies, this cartoon appealed me to with its detailed plot and unique world. It puts 99% of all Fantasy movies ever made completely to shame. Why can't someone put the same attention to these sorts of live action films? Or even a native English language cartoon? Pixar's technology and an Anime plot? Now that would be something worth seeing.

Howl's Moving Castle is intriguing.  The world (or worlds) this story is set in is mysterious, dangerous, and always unpredictable.  In other words, it is very much like ours, only with magic.  People are motivated by love and power.  The characters are at once fantastic, yet all too human.  Howl is self centered.  Sophie is an introvert.  Early on he gets mad at her for cleaning his castle and mixing up his potions, causing his hair to change colors.

Billy Crystal does steal most of his scenes.  When Howl tells him to move the castle, "...and make hot water for a bath." Calcifer responds, "Fine, like moving the castle isn't hard enough!"  My favorite joke though, is when Howl says to Sophie, "You're wearing that hat? After all the magic I used to make your dress pretty?"

If the story suffers at all it is in the lack of a clear explanation of all the goings on.  After returning to the castle through the portal from a place of war, Howl says to Calcifer that he was attacked by some, "...hack wizards who turned themselves into monsters for the king."  They then discuss how turning themselves into monsters may not allow them to turn themselves back, but the script never says why.  Howl himself turns into a feathered creature when he travels to that world, and it seems to take a toll on him, but again there is no explanation for any of it.

Although the plot is sometimes taxing, the animation is comfortable and soothing.  We slowly learn some things about Howl but not enough to fully understand him.  He eventually warms to Sophie and she falls in love with him.  The symbolism of a persons heart is used to great affect.   They become better people for having known each other but they never become fully understandable characters.