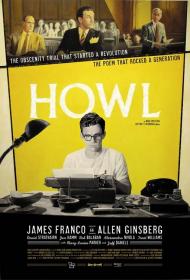 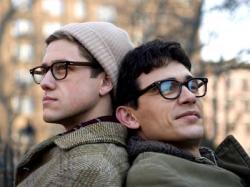 James Franco gives a brilliant performance as Allen Ginsberg. Although the actor is movie star handsome whereas the poet was not, Franco manages to physically embody the nebbishy charm of Ginsberg, including his Jewish New York accent. He carries nearly the entire movie on his shoulders and deserves an Oscar nomination for his effort.

Howl is told in 4 different sections that are intertwined together and its script is taken from actual court testimony, interviews with Ginsberg and the poem itself.

One section is of Ginsberg speaking about his life and work in 1957 during the time his publisher was on trial for obscenity charges for the publication of Ginsberg’s subversive poem Howl. Interspersed with this are flashbacks (in black & white) of Ginsberg’s early days as a Beat poet, mixed in with scenes from the obscenity trial and surreal animated scenes over which excerpts of the titular poem are spoken by Franco/Ginsberg.

By today’s standards the language in Howl is incredibly tame. In 1955, when it was first published, it caused quite a scandal. Its use of overt sexual imagery of both the straight and gay variety and street vernacular shocked the senses of many in academia and led to the attempted censorship of the work through the court system.

The impressive supporting cast includes Mary-Louise Parker, Jeff Daniels, David Strathairn, Jon Hamm and Treat Williams among others. But this is truly a one man show for Franco. Add Howl to his already impressive body of work.

The movie manages to make poetry seem cool. The animated sequences really bring Howl to life. This is poetry as protest. It is alternately sad, angry, sexy, vulgar and ultimately triumphant. Ginsberg gets the last laugh. What was criticized and challenged in court as having no lasting literary merit is now considered to be one of the greatest poems of the 20th Century.

Howl makes a great introduction to the Beat generation and eloquently expresses the argument against censorship. 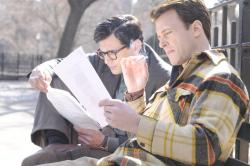 I recall watching a news program with Allen Ginsberg, done late in his life.  They interviewed him and followed him around with a camera.  Part of it showed Ginsberg lighting a cigarette in a building clearly marked as "No Smoking".  He does it in front of a security guard to get his reaction.  At first the guard just looked on.  Not getting the response he was hoping, Ginsberg then blew smoke directly into the security guards's face.  Finally he reacted and grabbed Ginsberg, forcing him out.

What this showed me was that Ginsberg thrived on getting people riled up.  He was clearly playing up for the camera and enjoying the attention it gave him.  Was he really bothered by the "No Smoking" statuette or was he just trying to get noticed?  I think Ginsberg loved attention.  It made him feel relevant.  "Howl" made him famous and set him on his life's path.

I am not a critic of poetry.  I will not judge if "Howl" is a good poem or not.  However, I do know that poets spend lots time on every single word they chose in their poetry.  Thus, Ginsberg fully understood his word choices would be shocking and controversial to some.  In fact, we would have likely never even heard of Ginsberg if he had chosen more flowery words and less frank references to sex.  The film even touches on this during the court room hearing.

Howl is a story of freedom of speech.  As this story is historical fact, we know what the courts decision was.   You may find such lines as "...The whole boat load of sensitive bull shit..."  or "...oh victory forget your underwear, we're free..." as uniquely descriptive or crap.  The trial over "Howl" simply reminds us that one man's poetry is another man's cure for insomnia and neither should judge the other for their opinion.

I have read "On the Road", but never knew before what Ginsbergs relationship to Neal Cassady was.  He was Jack Kerouac's inspiration for the character Dean Moriarty, as well as an inspiration for Ginsberg's poetry.   Beautiful women throughout history have been noted as inspirations for men's creativity.   Neal Cassady, whose active sex life and large penis has become legendary, was the male exception as the muse for the beat generation.