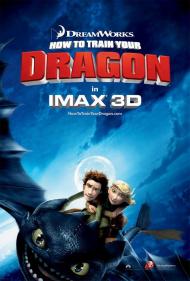 Hiccup is more scared of his father than a dragon that would have thought nothing of killing him two days earlier.

How to Train Your Dragon is Dreamworks best animated film since Shrek. With great pacing, plenty of action and just enough humor, it will entertain from start to finish. It does however, fall into some traditional Hollywood traps.

Hiccup is a Viking teen, who enjoys building things instead of fighting dragons. His village is a source of food for dragons. They consistently swoop in, burn buildings and make off with cattle. Hiccup's father is the chief Viking. He wants very much for Hiccup to become a dragon fighting warrior. To impress his dad, Hiccup built a device that takes down a rare dragon called a Nightfury. He races into the woods to bring back the dragon's heart. He finds the dragon still alive, but does not have the heart to kill it.

The dragon is missing part of it's tail and cannot fly. Hiccup creates a device, that when Hiccup rides on him, he helps the dragon steer. Hiccup names the dragon Toothless, and they become best friends. Toothless needs Hiccup to fly, while Toothless shows Hiccup secrets about dragons. Secrets that Hiccup uses back in his village in dragon fighting school, to impress the other Vikings.

I know Scott and Patrick are waiting for me to write it, so here goes. Hiccup is from a single parent, as is nearly every cartoon child in nearly every animated "family" film ever made. That plot device works in one scene, for one particular joke, when Hiccup's dad gives him a new helmet, but otherwise serves no purpose. Butler as Hiccup's dad finally gets to put his accent to good use. Fellow Scotsman Ferguson supplies some of the funniest lines as the dragon school teacher. Why none of the kids have Scottish accents is never explained. Hiccup's father eventually learns of Toothless and becomes at odds with Hiccup. He mounts a large attack on the dragon's lair, using Toothless to guide them. Hiccup then must gather his friends, and some other dragons to stop his fathers attack.

As I left the theater, I asked my son if he noticed the political subtext? He said I was reading too much into it. I argue though, that plots just don't happen. The film makers knew how it sounded as they wrote it, directed it, animated it, spoke it, and put it all together. The Vikings want to attack the dragons, as they are tired of being attacked by the dragons. They attacked them once but came back unsuccessful, only to go back again.

Hiccup learns that the dragons are not as they seem. They attack not for their own needs, but because they have to appease their leader. The dragons that attack them could just as easily flown away, but they chose to do it. This movie excuses the dragons attacking the village, but make the Vikings the bad guys who are merely defending themselves.

Hiccup even has a line where he says something to the effect of "...everything we know of them is wrong." If Hiccup can educate his people to better understand the dragons that burn their village, kill their people and steal their food supply, they can all get along. The fact that Hiccup can so easily persuade the dragons to join him merely by extending his hand in faith is nearly gag inducing.

Maybe I am seeing too much in this kids movie? Maybe the film makers are just so left leaning that they themselves instinctively put propaganda in their movies without even realizing it? Either way, the resounding message of this film is that if we just better understand our enemies, everything magically gets better. That worked in World War II after all. Oh wait! 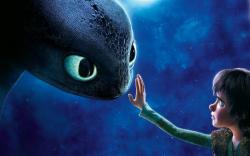 A boy and his dragon in How to Train Your Dragon.

Eric, you are reading way too much into this script. There's no political subtext. There's a message or a moral, but it's blatant and not subtle. In fact, I'm not even sure what the subtext is that you hint at. Are you implying that the Vikings and Dragons are symbolic of other groups in real life? Because I'm baffled by that if you are. Yes, it's trying to say that if different groups of people understood each other better than perhaps wars could be avoided, but that's not really political, just philosophical. It also never casts the Vikings as the bad guys. The only person who's shown to be truly a villain is the Dragon Leader, whom is subsequently attacked by the Vikings and the Dragons together. So clearly the message of this movie isn't avoid fighting at all costs (or that Nazis are misunderstood), but rather, make sure when you do fight that you're fighting the right person.  About the only thing I read into this movie is that the title sounds like a euphemism for masturbation.

Having got that out of the way, I do have to say that I agree with you Eric that this is one of Dreamworks more enjoyable cartoons. There's lots of action, humor and the animation is quite good. The final big battle is particularly well done and made me wish I had seen it on the big screen. The characters have a distinctive style about them that I quite enjoyed. It's certainly better than the other recent boy and his dragon film, Eragon.

Like you Eric, I wondered about the different accents. It wouldn't have been so noticeable if there hadn't been two such distinctive Scottish accents contrasting with Jay Baruchel's North Eastern nasal accent. It doesn't hurt the story really, but it does stand out.

The humor, while quite often aimed at children, is light and funny enough, but without hurting the action at all. Sure, this is a cartoon and so you know that no one is really going to get hurt, but it still works pretty well.

I do think that the dragons are too quick to make friends with the Vikings at the end, when at the beginning of the film they seemed to be enjoying battle as much as the Vikings, but it's a minor plot point.

I'm sure that with the success of this movie there will be an inevitable sequel. I can't wait to see what Eric will read into it! 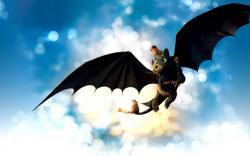 Eric, I agree with Scott and our nephew. You read far too much into this simple story. In fact I’m not sure if I saw the same movie you did. In the version I just watched the dragons are fairly unintelligent animals. Scott, I wouldn’t say the Vikings make friends with them so much as they domesticate them into pets. Therefore to say that the dragons enjoyed attacking the villagers at the beginning is like saying my cat enjoys attacking mice.

Eric, anyone with an imagination can read whatever political or social agenda into any movie they want, as both you (and Scott, whose interpretation I personally think is more persuasive) so brilliantly demonstrate in your reviews. Therein lies the beauty of art and one of the reasons for the existence of critics. That doesn’t mean our opinions are a true reflection of what the writer(s) intended however.

And I know we’ve had this tiresome argument before but since you brought it up yet again I will address it yet again. Children with one parent, or orphans, have been used as a sympathetic plot device since the dawn of literature and probably before that, back to oral histories told around campfires. It is not meant as any jab against the traditional nuclear family.

It is meant to show that the character has endured tragedy and hardship in their young life. After all what is the point of a fairy tale if the hero (or heroine) has nothing sad to overcome? Hollywood did not create this concept and I really don’t understand why it bothers you. I have yet to read a review by any other conservative movie critic that has a problem with this time honored tradition.

As for the movie itself, I quite enjoyed it. Visually it is colorful and whimsical. The characters are well-developed for an animated children’s movie and the action and humor are well-balanced. On a side note, am I the only one that thought Jay Baruchel sounded a lot like Christian Slater? 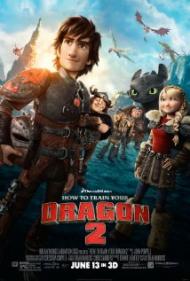