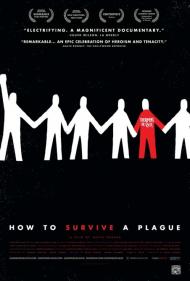 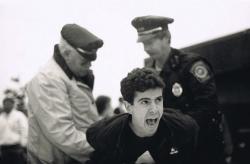 Peter Staley in How to Survive a Plague.

How to Survive a Plague is the Oscar nominated documentary about AIDS activism from the mid-1980s to the mid-1990s, focusing on the leaders of ACT UP and Tag. It uses videotape and newscasts from the times as well as interviews with AIDS survivors today who look back and comment on the times. It's an interesting film and at times an emotional one, but for a documentary it is surprisingly light on factual details.

The film begins in New York City in the mid-80s when the AIDS epidemic was really beginning to rage. The group ACT-UP was formed in 1987 with the intention of bringing about legislation, medical research and treatment that would help find a cure for AIDS. Most of the film is homemade video tape by members of the group and the quality varies. We sit in on their meetings, which are often argumentative and we follow them out onto their many protests and demonstrations. And in more personal moments, we see video tape of some of the members at home. The story continues in this way until the mid-1990s when drugs were developed that made the disease manageable.

At the end of the film, while mourning the loss of friends, the film also takes a moment to pat itself on the back, but just what this group actually did to contribute to the cure is never laid out in detail. Through their demonstrations they may have brought about social change, moving homosexuality further out of the closet than it was before and raising awareness of AIDS, but the film's claim that the drugs wouldn't have been developed without them seems dubious at best.

The film also shows political bias, casting Republicans, particularly George Bush Sr. and Jesse Helms, as villains. While it's true that Jesse Helms was no friend to gay people, his inclusion in the film via news footage seems purely inserted to show the government in a bad light and putting a giant condom over Helms home by ACT UP might have been amusing, but it hardly furthered the cure. Bush, meanwhile, is shown golfing while people are dying of AIDS and he is constantly referred to as a murderer because of his perceived refusal to put enough money into AIDS research, at least by ACT UP's standards. While it's very understandable that people who are dying would be angry and would want to blame someone or something for their situation, to accuse Bush or any politician of being the cause of those deaths, seems extreme.

Included in the interviewees are chemists from Merck, the drug company who first developed effective AIDS drugs. While one of them speaks of being inspired by AIDS sufferers, the film does little else to suggest that these drugs wouldn't have been developed even without ACT UP. In fact, the group's insistence on quick drug approval by the FDA is even criticized when it lead to AZT being released before it was proven that it was ineffective.

More interesting than the back patting is watching the strong and often dramatic personalities of the group bicker and argue amongst themselves. These arguments would eventually lead to a split in the group when many of the leaders broke away to form Tag, a group that focused less on demonstrations against drug companies and the government, and focused more on working with those groups. ACT UP would continue as a grassroots movement with its power in being able to put bodies on the street where needed.

The subject matter of How to Survive a Plague is ripe for a documentary. It's filled with characters and drama. I would have preferred a more detached look at it though. One made from the outside that looked objectively at the situation and the history of ACT UP and one that laid out the facts of exactly what the group accomplished. 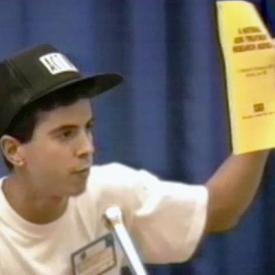 Early in the film we are shown a group of protestors blocking traffic while they chant, "Health care is a right!" The Founding Fathers of America established the right to life, liberty, and the pursuit of happiness. Health care was never part of the deal, but apparently these folks thought otherwise.

These protestors were convinced that the FDA had cures for AIDS that they were simply not releasing to the public for some reason. They blamed the government. They blamed the church. They were angry and they wanted to be heard.

Peter Staley was the poster boy for the movement. He is prominently featured here and was often the one appearing in interviews to explain the protests and actions being taken by the protestors. In a recent interview, he explained the passion behind the protests, "Well, a ticking clock is an amazing motivator and it really focuses the mind."

Staley and others were trying to save their own, as well as others, lives. They were desperate and you can feel it. I felt Staley's frustration but I did not agree with all that he said. He objected to President Bush keeping foreigners with AIDS from entering the United States. Why would Staley want people with AIDS to come to a country he claims is doing so little to find a cure? With all his bitching about our government, you would think he would warn people with AIDS to go elsewhere.

I felt some sympathy for these people as they were fighting for their lives, but it grew harder to like them. One man with full blown AIDS, yells "You are my murderer." to a pharmaceutical executive because he did not have a cure on the market. Another person says of Jesse Helms, "People are dying because of him." Still another person says of all the people who have died from AIDS, "This is what George Bush and Reagan have done."

At no point did anyone in this film take the least bit of responsibility for their own actions. When smokers get cancer or a drunk driver causes an accident there comes that moment where they wish they had made some different choices. Never does someone in this film state that they wish they had been monogamous or used condoms. They merely continue to blame others for not coming up with a cure for a disease they could have avoided if they had been more careful.

My heart went out to these people who are literally dying onscreen. I cannot imagine how it would feel to be living with such a death sentence, but I also do not understand how they can blame people so unrelated to the disease. Why did they not get mad at AIDS carriers who continued to have sex and spread the virus? It seemed to me that they were very eager to give the blame away and shoulder none of it themselves.

At the end of the film, the surviving activists proudly claim that their actions directly resulted in cures for AIDS.  As Scott wrote, we do not know if their protests made a difference. How twisted that these protestors blamed the scientists for their suffering under this disease but then took credit for the cures that the scientist came up with. 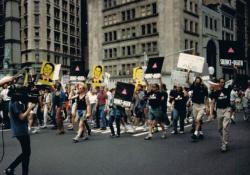 A march for AIDS Awareness in How to Survive a Plague.

I purposely waited to have the last word on this movie. As a gay man that came of age at the height of the AIDS epidemic, I naturally have a different perspective on it than my brothers have. To me the people in this film are heroes, for two main reasons. First for what they did to expedite the end of this disease as an automatic death sentence and secondly for how their efforts had the added benefit of advancing the larger cause of social equality.

Regardless of what Scott and Eric say, there is no way in hell those protease inhibitors would have been developed as quickly as they were without the actions of groups like the ones in this movie. The federal government was incredibly slow to react. Ronald Reagan didn't even mention the disease publicly until more than 25,000 American citizens had died from it. Does anyone truly think that if this disease had been primarily focused in the heterosexual community it would have taken this long for the president to hold a press conference?

When AZT hit the market it was priced at $10,000 a year for one person. This is an exorbitant price by today's standards but this was in 1987. 10 grand for a drug that, at best, merely slowed the pace of the rampaging virus's destruction of the human immune system. Of course drowning men will pay any price for a life-raft, however temporary its effects. In my opinion this was cold-blooded profiteering by drug companies.

Of course it costs lots of money to do medical research but these groups organized and fund-raised like their lives depended on it. Oh yeah, they did. Denying them credit is like saying Jerry Lewis deserves no credit for his work to find a cure for Muscular Dystrophy. Actually it's worse than that, since -unlike Lewis- many of these people were suffering from the very disease they were leading the crusade against.

The FDA was incredibly slow in testing and approving new -potentially life saving- drugs and blocked efforts by these dying men to grasp at these last strands of hope. Pat Buchanan, with whom I have never before agreed, even says during a televised discussion that he is for the right of AIDS patients to use themselves as guinea pigs for these experimental drugs.

The second reason these people are heroes is something that Scott mentioned. They forced awareness of gay people on the larger straight world. Newspapers and television news shows both regularly featured the latest antics by ACT UP and TAG. For the first time, outside of annual Gay Pride Parades, gay people were making headlines. At the time AIDS seemed like the end of the world but it has since proven the truth of that old adage, “What doesn't kill you, makes you stronger.” AIDS not only caused the gay community to get organized it forced the straight community to recognize it. Although it took a tragedy of near-Holocaust proportions, gay people as a group were visible in every corner of the nation at last.

On a more personal note I was at the peripheral of this movement.  I attended a Gay Pride/Pro Choice/Aids Awareness rally in Lansing, Michigan in the summer of 89. This movie vividly captures the people and times of that era. I remember a woman holding a rather pithy sign that read simply, “Hey Bush. Stay Out of Mine!” I was far luckier than most. I lost relatively few friends to the plague. Mother Moke, Grant, Robert, gone but not forgotten. Tony, Jerry and other friends and acquaintances living with the disease and to all those that perished, this movie stands as a powerful reminder of what we went through to get where we are today.