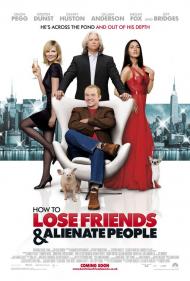 Directed by: Robert B. Weide 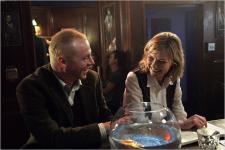 Simon Pegg and Kirsten Dunst in How to Lose Friends and Alienate People.

How to Lose Friends and Alienate People is currently at 37% Fresh at RottenTomatoes.com and the word-of-mouth about it was so negative that I didn't see it upon its release despite being a huge Simon Pegg fan. Having seen it now and enjoyed it for the most part, I have to wonder if all of the bad press is in anyway connected to the fact that for most of the movie the lead character pokes fun of those who write and obsess about celebrities and whether or not the people who wrote the reviews of the movie and who spend their time obsessing about those same celebrities, didn't enjoy that.

The plot starts off as a fish out of water scenario, where it excels, but too quickly devolves into a more standard romantic-comedy mode where Sidney is friends with the good-girl whom he should be dating, but lusts after the vain, self-centered girl that he could never have (at least not until the end of the movie when he must make a far too obvious choice).

The best and funniest moments in the movie are when Pegg is floundering after committing some sort of faux pas. Accidentally killing a dog, sending a tranny-stripper to a colleague's office on Bring Your Daughter to Work Day, and getting drunk and making a spectacle of himself at the 4th of July office barbecue.

Playing the two female leads are Kirsten Dunst as the good girl. Dunst is woefully under used here and spends most of the movie moping around, only shining once when she gets drunk. It girl Megan Fox plays It girl Sophie, the bad girl of the film. Both of the two female leads are upstaged by Gillian Anderson's dominating publicist character, Eleanor Johnson. I would have liked to have seen more of her character, but after a promising start she's hardly seen again.

Sure, I'm prejudiced in this movie's favor being a fan of Peggs, and maybe it helped to watch it with low expectations, but it's always nice to be pleasantly surprised about movie for a change. Too often these days it seems to be the other way around.

I am not the Simon Pegg fan that Scott is. Hot Fuzz and Sean of the Dead were merely okay in my book. How to Lose Friends and Alienate People is not my favorite film either, but I did enjoy Pegg, and how it approaches the relationship between the media and celebrities.

Sidney Young is the best character of Pegg's career. He comes across as a slacker party boy. Clayton describes him as, "A British person born in New Jersey." Sophie says to him that, "There’s something very damaged about you." Although he seems very common, he actually comes from an afluent family. His father is a Lord and famous author.

Sidney has an honesty when it comes to celebrities. He asks for an autogragh from an older actress whose work he has admired. He writes that a young egotistical director is pretensious. I loved the scene where he yanks off his sunglasses, that he is wearing indoors, and smashes them.

The media does take a bit of a beating. Like the liberal media not wanting to say bad things about President Obama, even if he deserves it, Clayton refuses to print the article in which Sidney slams the arrogant young director. The way the media kisses up to the celebrities in this movie, and in real life, is disgusting.

Dunst and Daniels do nothing for me. Either role could have been played by anyone. Fox is the "it" girl of her time. Her role is a bit reminiscent of Marilyn Monroe in All About Eve. Both play starlets trying to make it big. It is Pegg's interesting portrayal of Sidney that gives this movie any charm. My favorite scene, of his, is when he calls out Orlando Bloom at the 4th of July party. "Orlando, you used to be British." Not only is it a funny line but it also shows the complication of his character. He loves being around famous people, but he is honest about his opinion of them. 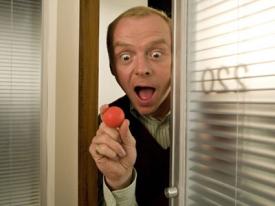 Simon Pegg is amusing. The script not so much.

This is a mildly amusing romantic comedy. It is all very predictable and unoriginal but provides some laughs. I laughed when Bridges’ character tells Pegg’s “You can’t ask a musical theater performer if he is Jewish or gay. From now on just assume that they all are Jewish and gay.”

I agree with Scott about Dunst’s character, especially her relationship with Maddox. Clearly this was written from the man’s point of view since it is never shown just what she sees in this older, married man. Whether it is his power at the magazine or the fact that he is unavailable that attracts her, the script shows no interest in finding out. We must just accept the fact that she is in love with him.

Eric, you mentioned All About Eve. Like that movie, this one opens with a scene at an awards banquet before flashing back to the events leading up to that moment. The movie this really pays homage to though is Billy Wilder’s The Apartment. The use of several establishing shots of the office building mimic similar shots from The Apartment and there is a scene in an elevator that is almost directly taken from that movie. Also the hero discovers belatedly who the man the woman he loves is having an affair with and in both movies it turns out to be his boss. In both movies the woman gets drunk and suicidal when the affair sours. Unfortunately Simon Pegg is no Jack Lemmon and Kirsten Dunst is no Shirley MacLaine.

I am not a fan of movies with long titles. How to Lose Friends and Alienate People is a crappy title to a mediocre rom-com.