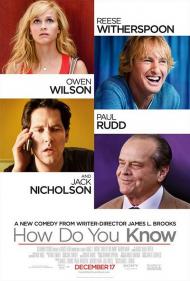 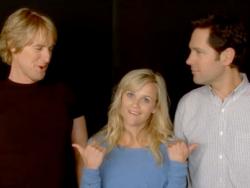 Owen Wilson, Reese Witherspoon and Paul Rudd might just be the most likable actors in Hollywood and they all star in How Do You Know.

How Do You Know isn't a classic romantic comedy by any means, but the cast is so damn likable that it hardly matters.  The chemistry between Witherspoon and Wilson is lukewarm (or should that be Owenwarm?) at best and seems simply platonic between her and Rudd (at least from her side).  And yet she's so cute and personable, as are Rudd and Wilson, and the script funny and warm enough that it all manages to entertain anyway.

Witherspoon stars as Lisa, an olympic softball player who is cut from the American team.  Wilson plays Matty, a relief pitcher for the Washington Nationals.  Lisa hooks up with him around the time she learns that she's been cut.  He's a shallow goofball who seems inexplicably charming despite his many flaws.  In short, he's the typical Owen Wilson character that we've seen a dozen times.  Lastly, Rudd is George, a man being investigated by the Federal government for wire fraud and other charges at his company.  He meets and falls in love with Lisa, but as she's with Matty, she only regards George as a friend.  The question in the plot is who will Lisa end up with by the time the credits roll?

Although Witherspoon is top-billed, Rudd steals the movie.  He gets the biggest laughs and was the character I cared most about.  The scenes with his father, played by Jack Nicholson, are some of the best in the movie and there should have been more of them.  They could have cut Wilson's part down to nothing and given Nicholson more screentime.  I have enjoyed many of Wilson's movies, but his charm and single character has begun to wear a bit thin.  The strongest emotional story in the whole movie is what's happening between George and his father.

Having said that, I hasten to point out that Witherspoon is cute and charming here.  You can see why she would attract the attention of both men.  She's the next generation Meg Ryan and should do more romantic comedies.   She has a flair for them and can genuinely act as well.

While I laughed and liked the characters, I was never really very invested in the romance.  Lisa's relationship with Matty is so shallow and slight that you know it's not going to last.  He's really only there for some comic relief and to provide a third leg to the triangle.  Her relationship with George is different.  He's smitten with her from the moment he meets her, but she never really seems all that attracted to him.  They seem to enjoy each other's company, but there's very little physical chemistry.

Despite it's problems, the game cast throws themselves into it all with such talent and charm that I was never bored and almost always smiling or chuckling.

My enthusiasm might seem tempered, and it is, but this is still a movie worth seeing, but there's certainly no need to rush out to a theater to do so.  It will be just as enjoyable at home and probably cost you a lot less. 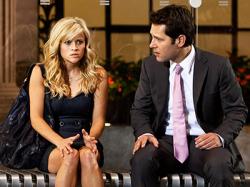 Reese Witherspoon and Paul Rudd in How Do You Know.

Okay, this movie asks a few questions.  As Scott wrote, "The question in the plot is who will Lisa end up with by the time the credits roll?"   The question the audience is asked is do we care?  The title asks how do you know when it is love?  According to the movie it is when you use condoms with the other girls.  hahaha.  Yep, That is the movie's best joke.

All three characters have decisions to make.  Lisa has to decide who she wants to spend the rest of her life with and what exactly that life will be.  Matty has to decide if he can commit to a live-in girlfriend and be semi-monogamous.  George has to determine if he will take the fall for his dad.  The answer to all of these questions are so completely obvious to the audience that we become frustrated by the sheer inability of these characters to see the right answer, even though they are staring them in the face.  By the end of the movie, the only one I cared even the least amount for was George, as his situation was not exactly his fault.

The best and funniest scene is when George and Lisa visit George's loyal associate after she gave birth.  The father of the newborn walks in, gives a speech and breaks Lisa's heart.  It is the film's most heart felt moment as well as the best punch line.

Although it had a couple of decent moments and I really liked this line, "We are all just one small adjustment away from making our lives work."  How Do You Know is not worthy of the cast.  They have all done better work in better films and this one will disappear quickly into their filmography lists, only occasionally discovered by one of their diehard fans.