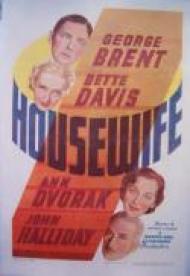 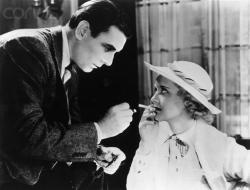 Housewife is proof that Warner Brothers Studios didn’t really know what to do with Bette Davis in the years leading up to her superstardom. She wasn’t a conventional beauty or an obvious sex symbol like most female stars of the era; yet her fiery determination and unique persona made her an interesting presence onscreen. The result being that quite often she was top-billed while playing essentially supporting parts in her own pictures.

Housewife is one such movie. Judging by the opening credits you would expect Miss Davis to be the female lead when in fact she is not. She plays the “other woman” in a part with much less screen time than either George Brent or Ann Dvorak (the titular housewife). Not that it matters much as this is not exactly the type movie you brag about having on your resume.

The story centers on a young married couple, William and Nan Reynolds. William writes copy at an ad agency earning 175 bucks a month. His boss dislikes him and won’t listen to his ideas. His wife Nan (as the title suggests she is the real star of the movie) has more brains and gumption than her husband and with her nudges (plus a little alcohol) he gets the nerve to finally quit his job, open his own agency and eventually steal a big client away from his former boss.

Ann Dvorak, although mostly forgotten today, was a real presence in 1930s Hollywood. She was quite striking looking with deep beautiful eyes and was underrated as an actress. Here she is more than adequate, but to see her really shine watch either Scarface or Three on a Match.

Bette Davis plays Patricia Berkeley, an old high school flame of William’s who left Chicago for New York City and became a very successful copy writer earning the exorbitant sum of $25,000 a year. She returns and eventually gets hired by William. After she writes a catchy tune for a cosmetics company client she and William rekindle their affair. A blonde Bette Davis looks pretty, smokes a lot, and gets to wear a number of gorgeous gowns but her screen time is limited and the script never allows her to really sink her teeth in.

Although essentially a drama Housewife contains a few humorous scenes. One takes place at the radio station where the first attempt at a commercial jingle doesn’t go well because William failed to show up for the rehearsal. In a scene that foreshadows television’s Mad Men he was still having “lunch” with Patricia at 4 o’clock in the afternoon. As a result the song is embarrassingly hackneyed and what’s more it’s followed immediately by a ridiculous black-face routine.

The Reynolds have a young son named Buddy (Ronnie Cosby). He’s adorably cute and plays a pivotal part in the movies’ most melodramatic moment. Although ostensibly the story plays out over the course of several years somehow little Buddy never seems to get any bigger. The ending feels totally rushed even for a movie that runs a mere 69 minutes. One moment William and Nan are getting a divorce and literally the next second they aren’t. Housewife, despite its few charms, is eminently forgettable.