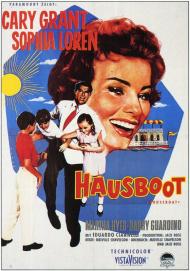 Houseboat is a romantic/comedy about a family living on a houseboat. Simple enough, only Grant has been funnier in many movies and Loren has looked better in any number of films.

Grant plays a man who has been separated from his wife for several years and has rarely seen his three kids in the meantime. Upon his wife's death he takes full custody of them and moves them from their rich grandparents home to his tiny New York apartment. There, one of his sons wanders off and befriends Loren who has recently ran away from her protective father. Grant ends up hiring her to be his maid/nanny. As the apartment is to small for all of them they decide to move into the guest house of his rich in-laws. However, a train destroys it so they end up living in a houseboat.

Grant elicits zero laughs and Loren is so skinny that her face looks gaunt. She sports a short haircut that accentuates her long nose. The most annoying aspect to the movie, however, is the direction. One minute they are filming a scene on location in and all of a sudden they are on a sound stage. Lamps, no matter how powerful, can never reproduce the look of sunlight.

The two stars have little chemistry together. He was 54 and she was 24. Other than the dance at the end of the movie, Grant looks completely out of place the entire time. He never connects with Loren or any of the kids. Loren's character runs away from he father at the beginning of the movie and ends up marrying a man just as old as her dad. Houseboat is a laughless bore that only serves as a curiosity for watching the teaming of two such stars. 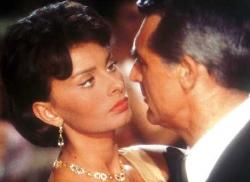 Eric is completely wrong on this one. Were you in a bad mood when you saw it? Houseboat is a charming family movie. It is a bit like The Sound of Music only without the singing.

There are plenty of laughs and the emotional arc of the story rings true. The three children all contribute to the success of the movie as well. Especially the oldest boy. He is having the hardest time adjusting to the death of their mother. One scene in particular where Grant explains death to him is quite touching.

The movie is shot in glorious Vista-Vision. The colors are gorgeous and the scenery on the river is lovely. The most famous scene from the movie is where Grant and Loren are standing on the deck of the houseboat in the moonlight with the river shimmering behind them and she calls him "Pigheaded." Then she asks, "It is the right word, Pigheaded?" Grant famously replies, "It'll do."

Contrary to Eric's opinion, the chemistry between Grant and Loren is electric. She was so sexually mature and he so incredibly youthful looking that the age difference between them hardly seems to matter. The terms feel-good and heartwarming aptly describe this movie, but only in the best sense. 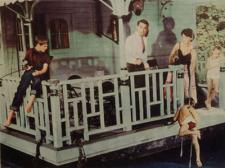 Patrick you stole my line. The first thing I thought after reading Eric's review was, wow, was he in a bad mood or what? I can think of no other reason for your harsh opinion of this movie, Eric! I thought Grant and Loren had good chemistry and Grant seems youthful and Loren mature so that the age difference doesn't seem inappropriate at all.

I also thought the movie contains some funny lines. When Grant tells his friend that he's hiring Loren for the children, his friend replies, "Adopt me!" The children also get some cute and funny lines. And I thought the Italian driver with the hots for Loren was funny. He seemed to be from Virgina via New Jersey.

Like you though Eric, I was annoyed by the switch between location and studio shots. This is particularly noticeable when Grant and the kids are walking around the Tidal Basin in Washington D.C. where it looks great and in Vista-Vision as you say Patrick, but then cuts to an obvious studio with a film running behind them as Grant and the kids fake walking. And that's not the only time. I know that it was harder in those days, due to technical limitations, to film on location, but they do it so easily do for some scenes, why not all?

This isn't Grant's best movie ever, but it is funny, charming and above all entertaining. Eric, I think you should give this one a second chance.