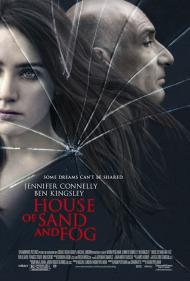 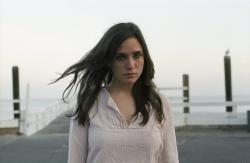 Jennifer Connelly in House of Sand and Fog.

House of Sand and Fog tells the story of two very different people at odds with each other. Neither one of them is the hero or the villain of this story. Both of them have pasts that are never fully explained. Jennifer Connelly and Ben Kingsley portray the two characters, and they each deliver a powerhouse, award worthy performance, that raises this movie above its made-for-TV-movie-of-the-week plot.

Kathy Nicolo, played by the always beautiful Connelly, is an emotionally wrecked, recently divorced, recovering alcoholic. The movie begins with her eviction from her home by the county for the failure to pay a back tax that she never really owed. Embarrassed to ask her family to help, she moves into a motel and goes for legal aid, where she is told that her home has already been sold.

The man who bought her home is Masoud Amir Behrani (Kingsley), a former Colonel in the Iranian army. He purchased the beautiful home, with ocean views, for his family, and with the hopes of selling it for a nice profit, so that he can keep supporting his family in the manner to which he feels they deserve.

The plot meanders along, with several confrontations between the two characters where Masoud refuses to sell back the house to the county, unless he is given four times what he paid for it, and with the sub-plot that Kathy begins an affair with the police officer that came to evict her at the county's orders. But the plot is secondary to the characters here. Kathy is emotionally weak and at odds with her family, where Masoud is totally consumed with family and being strong at all times.

Where the movie loses focus is in its final act. Until this point, it is clearly two character studies, without any real action, except for the emotional kind. But then, as if seeking an ending with a bang, the story suddenly moves in an unexpected and unrealistic way, that undercuts the human drama that preceded it.

The film is beautifully shot by first-time director Vadim Perelman, with nice passage of time shots, and good use of color.

Thanks to Connelly and Kingsley, a movie that to describe, sounds like something on the Lifetime channel, ends up a gripping story of two very different, but interesting characters, which is only marred by a slightly overdone ending. 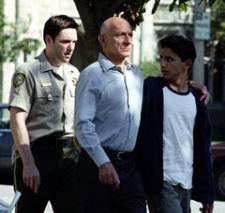 Like her husband, these three men should have gotten as far away from Kathy as they could.

House of Sand and Fog features a bunch of selfish, unlikable people. There is no one to root for, and thus nothing to catch my interest. Kathy lost her home to a technicality that could have been avoided had she simply responded to the accusations of her tax debt, and not been drunk. Behrani treats Kathy, and his own wife, as if they were children needing discipline. Lester leaves his wife and kids to have sex and "poor pitiful me." conversation with Kathy, who knows she is having an affair with a married man.

The beginning of the movie flips back and forth between Kathy and Behrani. Kathy is shown doing nothing but living in her unkept home that she inherited. She is too lazy to even open her mail. Behrani meanwhile is working several jobs to make enough money to buy the house. At this point, Behrani is the sympathetic character.

Kathy is never written as a sympathetic character. In fact, she actively destroys her own life as well as everyone she comes in contact with. For whatever reason, possibly her drinking, her marriage fell apart. She was given a home to live in but lost it due to her ineptness. She has an affair with Lester, destroying the lives of his wife and two children. The affair leads him to do acts for her, that ruin him professionally. Because she did not take her Lawyer's and Lester's advice to leave the Behrani family alone, she brings about their demise.

Sure she is not the only one making bad decisions in this movie, but she is the catalyst that gets everything moving. Had she just acted more responsibly about the house, Lester's children would still have their Daddy. Lester would still have his job, and most importantly, the Behrani family would be happily living the American dream.

Jennifer Connelly and Ben Kingsley in House of Sand and Fog.

House of Sand and Fog is a brilliantly acted tragedy. Yes Eric, Kathy is the catalyst but to blame this tragedy on her is not only overly simplistic but it smacks of misogyny. When exactly did she tell Lester to lock the Behrani family in their bathroom at gunpoint? To me what the movie demonstrates is how those famous twin sins of pride and prejudice can lead to unexpectedly dire consequences.

Unlike my brother Eric, I was able to identify with and root for these characters, flaws and all. The script will have you changing sides several times as the story builds. Yes Kathy is irresponsible with self esteem issues, and yes Behrani is arrogant and selfish, but neither of these foibles should lead to the violent climax in store.

I do agree with Eric that the two central female characters are written as quite weak. They impassively allow the men in their lives to control their destinies. At the same time, however, they are the peacemakers and the ones who attempt to smooth things over. If it was up to them this conflict over home ownership would have been easily resolved.

Which brings us to the men in the story. The violence occurs completely due to their actions. Lester is a bigot. He would never have attempted his strong arm tactics against American born citizens. His invoked threats of deportation are blatantly racist. It is no accident that the Behrani family is of Middle-Eastern descent (they are from Iran). And it is Lester's rash behavior and intentionally disrespectful mispronunciation of the Behrani son's name that provides the spark that sets off the tragic shooting.

As for Masoud Amir Behrani (Ben Kingsley giving a gut wrenching Oscar nominated performance) he is hypocritical, a snob and oh so prideful. In one conversation with his son, right after Lester's first visit in an attempt to persuade him to sell the house back to Kathy at cost, he reveals these character traits...

Esmail: "Why did that man say we would be deported?"
Behrani: "I do not know. But we are American citizens. We own this house. They can do nothing to us now."
Esmail: "I feel bad for that lady, Baba-jan."
Behrani: "The woman's house was taken from her because she did not pay her taxes. That happens when one is not responsible."
Esmail: "But..."
Behrani: "Do you understand? Do not feel bad. Americans they do not deserve what they have. They have the eyes of small children who are forever looking for the next source of distraction, entertainment, sweet taste in the mouth. We are not like them. We know rich opportunities when we see them and do not throw away God's blessing."

...In the same conversation he calls himself an American citizen, in order to conveniently defend his position, but then turns right around and insults Americans.

I was emotionally devastated by the outcome of what started out as a simple conflict over property rights. I see Scott's point that the ending is a bit overcooked but not to the point that it is unpalatable. This chain of events is unlikely but not at all implausible. And the final line of dialogue is fittingly succinct and perfectly delivered by Connelly. “No, it's not my house.” As it turns out, the price was way too high.